An email purported to be between an Nvidia graphics card partner and a retailer has been shared by YouTube channel Gamer Meld. The email shares multiple key dates in the release calendar for the next generation of Nvidia GeForce GTX graphics cards. 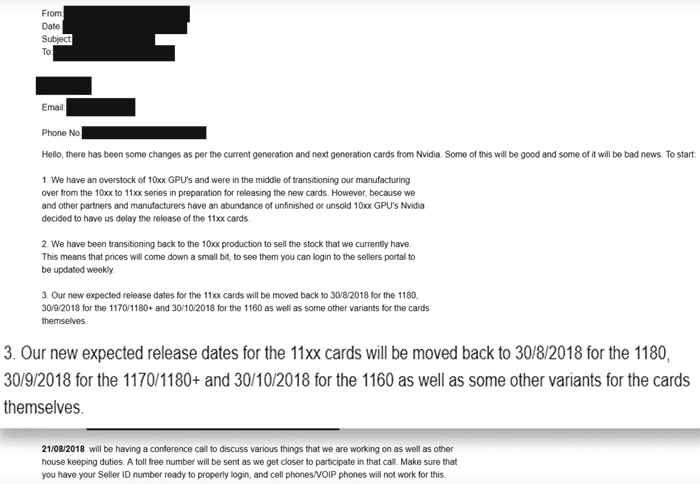 Above you can see a screenshot of the shared email with sensitive information, likely person or organisation identifying, obscured by the source. After a bit of a preamble, discussing the current situation with "an abundance of unfinished or unsold" GTX10 series GPUs needing to be cleared before GTX11 can be launched and released, the email delivers three key "expected release dates" for the first next gen cards.

If the above are release dates then, usually, launch dates will come a week or two ahead of them. With the new flagship Nvidia GeForce GTX 1180 set for 30th August, it might well be the GPU hardware star of the show at Gamescom, Germany, which runs from Wednesday 22nd to Saturday 25th August. A week or so later we might see the first GeForce GTX 1180 cards become available.

A month after the GTX 1180, Nvidia looks set to release the GeForce GTX 1170/1180+ cards. The + model could be the third party cards, which will be allowed to release after Nvidia has milked eager early adopters of cash via its Founder's Edition product line. However, TechPowerUp speculates that the 1180+ will be "a brand new 'premium' brand extension," with faster clocks and/or a premium reference design. Another month later, but still in time for the Xmas gaming PC rush, the mainstream Nvidia champ GeForce GTX 1160 should appear.

Lastly, you will notice the leaked email includes a partner conference call scheduled for 21st August, the day before Gamescom. I guess that's another way of preparing retailers for the upcoming product lines they will be selling.

Video: skip forward to 50 seconds to avoid chunk of waffle.

philehidiot
, or that someone has just released it for the chaotic fun?

On the Internet there are plenty of people who just want to watch the world burn.