Intel has released the Rocket Lake Xeon E-2300 server CPUs, aimed at single-socket entry-level server, and small business applications. This is the first update to the Xeon E-2X00 series since the Coffee Lake E-2200 family was introduced in Q2 2019, and requires the new Socket H5 (LGA 1200). The most important changes delivered with alongside this Rocket Lake silicon are improvements to the memory subsystem and support for PCIe 4.0 devices. 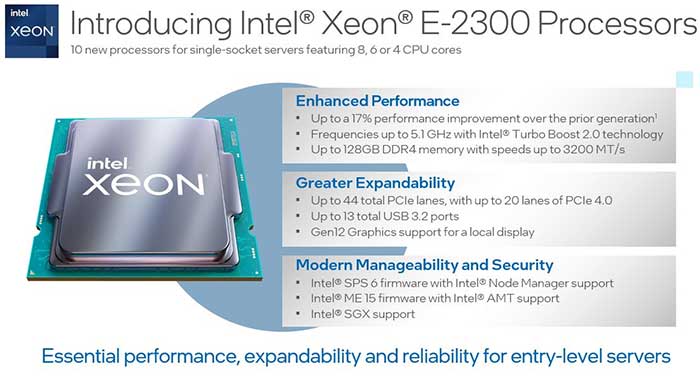 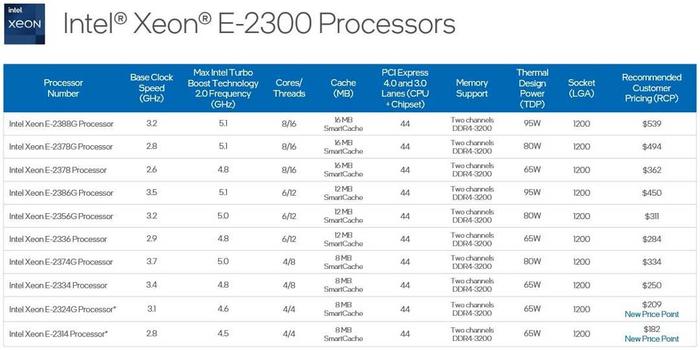 Intel trumpets that the new Xeon E-2300 processors deliver up to 17 per cent faster performance to the prior generation thanks to the underlying RKL architecture tweaks, mostly the Cypress Cove core design. As, mentioned above, the new lineup delivers processors with up to 5.1GHz clock speeds. Memory performance is enhanced too, with the Rocket Lake Xeons supporting up to 128GB of dual-channel ECC DDR4 RAM, with speed up to 3200MT/s. 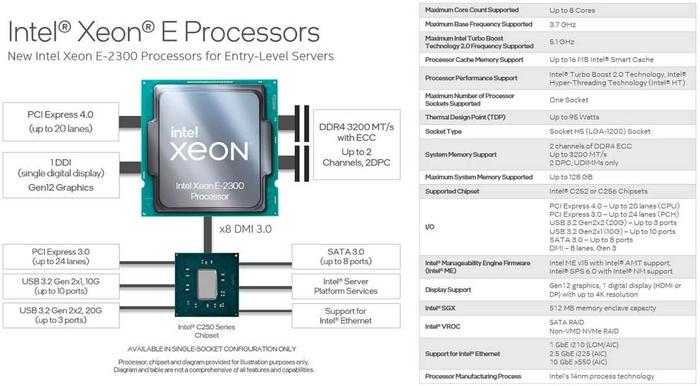 If you are interested in these new server processors, they should be available soon via your usual vendor, and you can check the MSRPs in the specs table above.

HEXUS reviewed the Intel Xeon Platinum 8380 Processor 2P (Ice Lake) in April this year, a higher end SKU family based on the Sunny Cove architecture, with up to 40 cores, large caches, up to 2 CPU sockets, 8 DIMM channels, and more.

Posted by [GSV]Trig - Thu 09 Sep 2021 11:01
Base level one of these in a new HP Microserver would be nice..
Posted by azrael- - Thu 09 Sep 2021 11:14
It always annoys me that the Xeon E line is referred to as server processors. They're just as much used for entry-level workstations, if not more. They're basically Core i processors with a few features less fused off.

The low total RAM capacity is troubling.
Posted by QuorTek - Thu 09 Sep 2021 18:31
Amount of lanes seem low on both sides of the fence though, also in most consumer platforms, unless you really spit in.