Samsung has launched its revamped Exynos mobile processor at CES 2021 as promised. The new Exynos 2100 revealed today is a premium 5nm SoC, integrating top of the line Arm CPU and GPU technology as well as AI-acceleration, a tri-core NPU, an advanced ISP, and 5G modem supporting 5G's sub-6GHz and mmWave spectrums from 2G GSM/CDMA, 3G WCDMA, and 4G LTE. 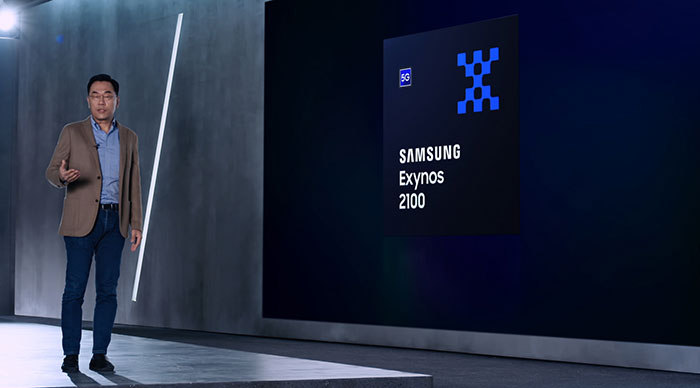 Yes, this is Samsung's newest flagship processor and one got the impression ahead of launch that it could be a refresh from Samsung that could deliver serious competition to Qualcomm – which has won favour in flagships over recent years. During the launch presentation Kyeongjun Kim, EVP and head of Mobile R&D Office at Mobile Communications Business, Samsung Electronics, said that "With powerful processing, fast 5G connectivity, and intelligent AI-acceleration, the Exynos 2100 offers the utmost performance that meets the stringent quality standards and requirements for our next generation smartphone." This confirms the rather obvious fact that the soon to launch Galaxy S21 will have at least some regional variants powered by the Exynos 2100. Will the US version come with the Qualcomm SD888 though?

Some of the key claims from Samsung about its latest processor are that it offers an overall 10 per cent better performance plus a 20 per cent reduction in power consumption compared to previous 7nm processors – addressing a 'traditional' weak point of the Exynos line (alongside the thermal implications of inefficiency). Additionally architectural changes are claimed to deliver greater than 30 per cent better CPU performance than the Exynos 2100's predecessor, and the new GPU up to 40 per cent improved graphics performance – and one must not forget to consider the big steps taken by the NPU which, in the Exynos 2100, is capable of 26 TOPS.

As mentioned above we are expected to see the Samsung Exynos 2100 processor in most world region Galaxy S21 flagship smartphones. It will be interesting to see third party reviews and comparisons when it emerges and whether other device makers pick up this SoC. Samsung says that the Exynos 2100 is in mass production, as you would expect.

Last but not least, Samsung has confirmed that it will at last move to using an AMD Radeon GPU with its next generation Exynos processors. This move has been in the back of our minds since Samsung and AMD signed a deal back in 2019 – but at least we can see the nearing of fruition with the first Exynos SoCs with RDNA graphics baked-in coming approx year from now.

Posted by tunrip - Wed 13 Jan 2021 14:51
Pretty exciting if they've finally solved the weaknesses in Exynos compared to Snapdragon… And even more so with Radeon in future years!
Posted by Nelke - Wed 13 Jan 2021 15:07
Yeah this news makes me pretty excited to see what they've been putting together for future mobiles, glad I help off on any updates last year. Would this mean the end to Exynos or would they still keep it going and use it for budget devices?