A new Asus gaming laptop featuring unannounced processors from both AMD and Nvidia has been listed by a German tech retailer. Over the weekend it was spotted that Expert.de shared a product listing for the Asus TUF Gaming (FA706QM) 17-inch gaming laptop which apparently features both an AMD Ryzen 7 5800H CPU and Nvidia RTX 3060 Mobile GPU, among its components. 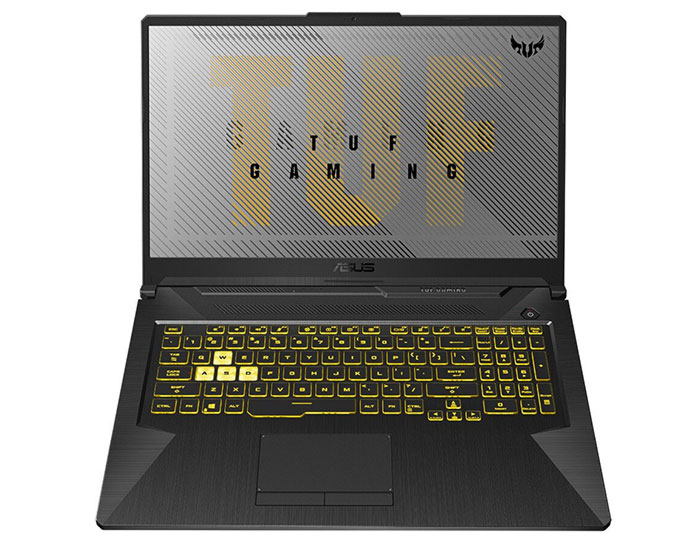 Asus TUF laptops aren't its best portable gaming machines, for better performance and supporting components the Asus Strix and Zephyrus gaming lines will be preferable, if within budget. Thus supporting the new APU and GPU in the TUF you will find just 8GB of DDR4 memory as standard, and a solitary 512GB drive won't store many modern gaming titles. Another particular weak point of this device is expected to be the IPS display panel with a low max brightness of 250nits and mediocre colour gamut reproduction. On the positive side, this 17.3-inch IPS class FHD panel does have a 144Hz refresh rate, and 2.6Kg isn't bad for a powerful 17-inch laptop. Lastly, the price might make it an attractive choice. 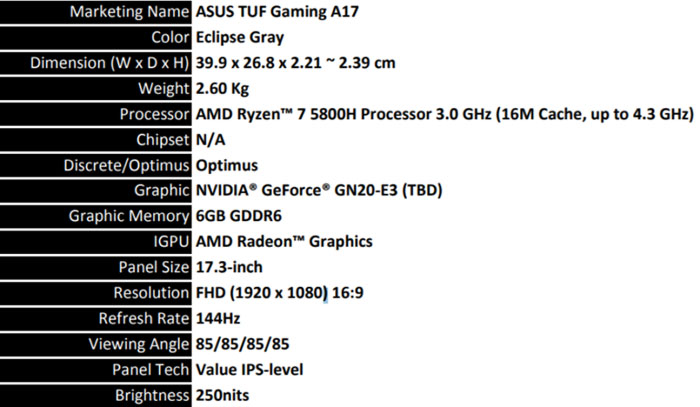 Expert.de has since taken down the Asus FA706QM listing spotted by Momomo_us but VideoCardz captured the listing, both pictures and spec, for posterity. If the Asus TUF 17-inch gaming laptop isn't of great interest to you, Momomo_us has since added a Tweet with further laptops with unannounced hardware you might be interested in such as:

The above trio are mainstream laptops and should be quite slim and portable for their screen size. Remember the Ryzen 7 5700U and Ryzen 5 5500U are both supposed to be Lucienne parts – next gen APUs featuring Zen 2 CPU cores. Some other 5000U parts have Zen 3 cores, but all 5000H parts have Zen 3 cores. A table showing which processors are in which family is available in a previous article we published about premature AMD Ryzen 5000 mobile CPU laptop listings.

Posted by rave_alan - Tue 15 Dec 2020 11:31
Still FHD and with 17.3 it makes it even worse.
Posted by chj - Tue 15 Dec 2020 12:38
No doubt it'll come to 15.6 but I hope they pair it with a better screen and a better thermal solution. The last gen had air vents which were sealed up and people resorted to dremeling then open https://youtu.be/HJS-ZAmcreI.
Posted by Gentle Viking - Tue 15 Dec 2020 14:29
TBH the reluctance of most laptop companies to not build high end AMD machines are quite suspect, okay AMD dont have their new stuff out in mobile form yet.
But once they do you should be able to put together a all AMD machine that would be quite potent on its own merits.

Though i also must acknowledge that the support for AMD in some productivity programs are small.

My editing software do support my 5700XT, but letting my 12 core threadripper do the work it is pretty much the same speed VS letting the GFX do the work.
Posted by Crowls - Wed 16 Dec 2020 21:05

Gentle Viking;1338941
TBH the reluctance of most laptop companies to not build high end AMD machines are quite suspect, okay AMD dont have their new stuff out in mobile form yet.
But once they do you should be able to put together a all AMD machine that would be quite potent on its own merits.

Not that suspect this year, demand for the 4000 series would have been a bit of an unknown for them, it will definitely be suspect if we don't see high-end amd machines in 2021 though.

In the case of these TUF models, they don't indicate any particular trend either way as they have always been a bit of an entry-level offering from Asus.