One of the biggest tech events this week is set to be the release of the first batch of AMD Ryzen 5000 Series desktop CPUs on Thursday. The following four Zen 3 architecture CPUs are supposed to be available from 5th November; the Ryzen 9 5950X and 5900X, the Ryzen 7 5800X, and the Ryzen 5 5600X. Of course the latter will be the most affordable / accessible of this opening quartet, and will be watched particularly closely by those on a mid-range budget.

In October we reported upon a leaked PassMark CPU result for what was thought to be an AMD Ryzen 5 5600X. The headline winning property of this Zen 3 6C/12T CPU was that it had stolen the single threaded performance crown from Intel challengers in the official PassMark rankings. During AMD's launch event it had compared the 5600X to the similarly configured Intel Core i5 10600K, which it soundly trounced in performance per dollar in single and multi threaded workloads plus gaming. That obviously wasn't the full story, and it seems like AMD was hiding its light under a bushel. 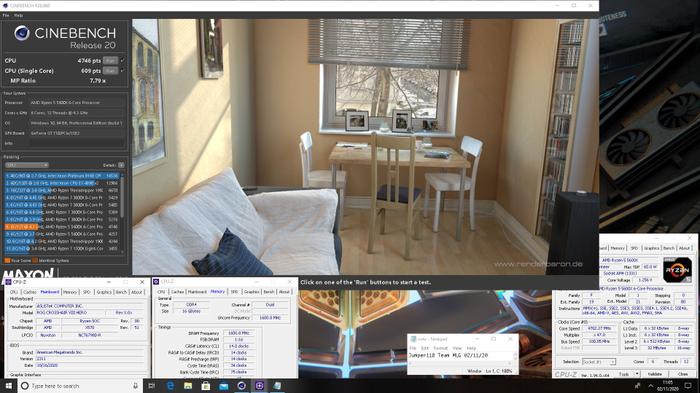 Yesterday a set of Cinebench scores featuring the AMD Ryzen 5 5600X emerged on the LinusTechTips forums, via VideoCardz. If the scores are genuine the Ryzen 5 5600X scores 609 points in the Cinebench R20 single-core benchmark. This is a great result as 600 is a significant milestone. The only other CPU we know has passed this mark is the Ryzen 9 5900X (scores 631 points) as AMD highlighted that result (see slide below) at the launch event in early October.

Fast single thread performance is still welcomed by gamers as one of the more vital statistics of a CPU, so it is particularly interesting to see a chip like the AMD Ryzen 5 5600X slide comfortably past 600 in Cinebench R20 1T tests. 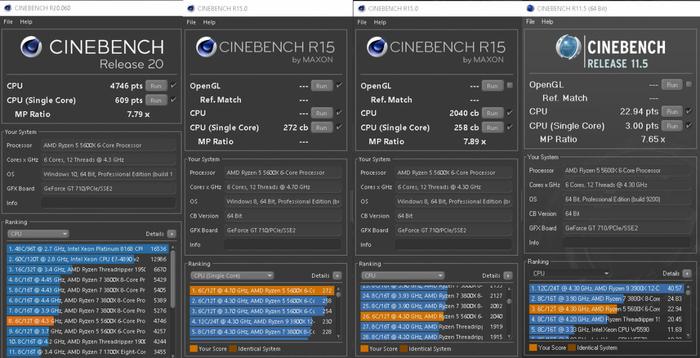 The user that bought the AMD Ryzen 5 5600X early and tested it in Cinebench R20 1T also ran a number of other tests - both single and multi-thread tests in R20, R15, and R11.5. I've embedded the full range of results above for your convenience - click to zoom.

iggy
Can I have an early one please?

The usual address if you would: