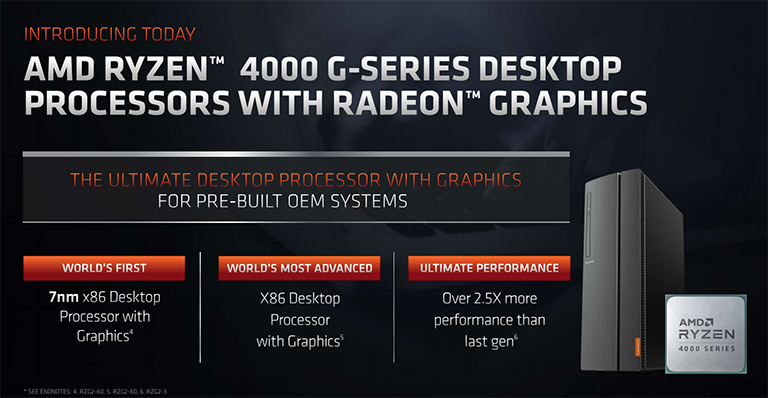 That's good news for many who want to mate the capable, proven Zen 2 CPU architecture with Vega graphics for a mainstream PC that has most bases covered and doesn't break the bank.

AMD is sensible insofar as it leverages the same technology found in Ryzen Mobile 4000-series chips, codenamed Renoir, yet being primed for desktop, TDP budgets are increased up to 65W for a number of processors.

The one rather large catch is that AMD is releasing these processors to prominent OEMs in the first instance, meaning you will see them in pre-built systems from the likes of Dell, HP, Acer, Lenovo, Asus, et al, rather than as standalone chips for the DIY market.

Though AMD says aftermarket chips with integrated graphics are coming to the DIY segment in due course, the reasoning for going down the OEM-first route rests with the larger market opportunity - OEM is reckoned to be 4-5x larger than DIY, and it's one area where rival Intel remains particularly strong. 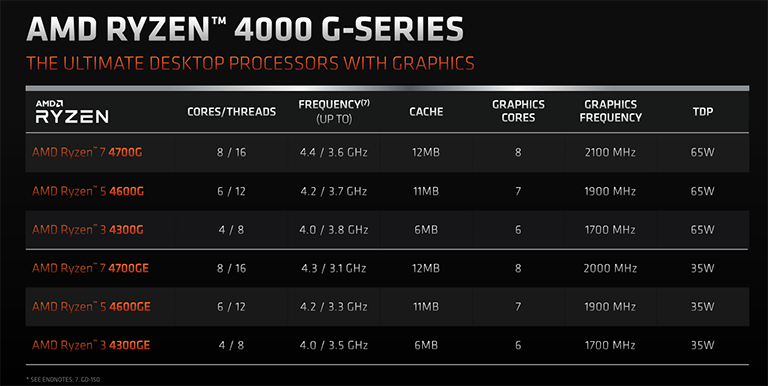 The combination of Zen 2 cores and Vega graphics is now a proven one. Both are built on a 7nm process, but for purists it's a shame that AMD hasn't moved on over to the newer Navi GPU blueprint for its burgeoning range of APUs.

Nevertheless, there are six desktop G-series parts, split into two groups of three based on having either a 65W or 35W TDP. There's SMT everywhere for this release round, and the core-and-thread counts match up to specific families, so Ryzen 7 has 8C16T, Ryzen 5 6C12T, and so on.

CPU frequencies are robust, and it's inevitable that the G parts will run at higher speeds than GE. Even so, we expect to see an all-core 3.0GHz on even the slowest processors. Cache sizes are made up of 512KB L2 for each core plus 8MB L3 on 4700G and 4600G and 4MB on 4300G.

Additional power budgets for the G-suffixed parts enables AMD, depending upon application, to turn up the wick on the Vega graphics, all the way up to a peak 2,100MHz for the Ryzen 7 4700G. Like the mobile counterparts, the number of graphics cores drops as we move down the families. Understand that one AMD graphics core actually refers to 64 shaders, meaning the 4700G has 512.

Scaling down power to 35W, which is actually very much mobile territory, AMD does well to keep frequencies solid on all fronts. If it's not clear already, these Ryzen 4000 G-series are ostensibly mobile Renoir chips in a socketed form factor, tuned for up to 65W.

It's worth knowing that as a fully-fledged SoC based on an existing design, there's only a PCIe 3.0 interface out for additional graphics and connectivity, not the faster PCIe 4.0 we see on the latest IGP-less desktop chips, which is a shame for anyone expecting super-fast storage on an OEM-built system. That said, AMD still expects OEMs to use B550 boards in their systems. 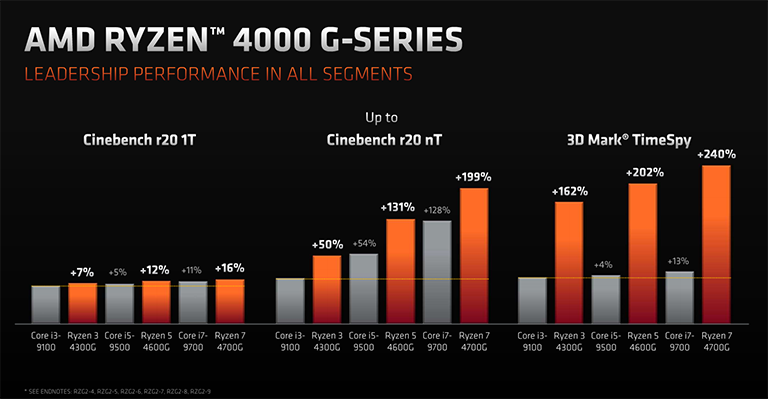 During a presentation yesterday, AMD compared the performance of its G-series processors against IGP-supporting Core i3, Core i5, and Core 7 chips from Intel. The comparison is disingenuous as Intel has released faster 10th Gen parts. AMD's reasoning? Its benchmark team couldn't get any newer parts, but if you believe that, I have some top-quality snake oil for sale.

In this unfair match-up, the new IGP Ryzens do as well as expected. 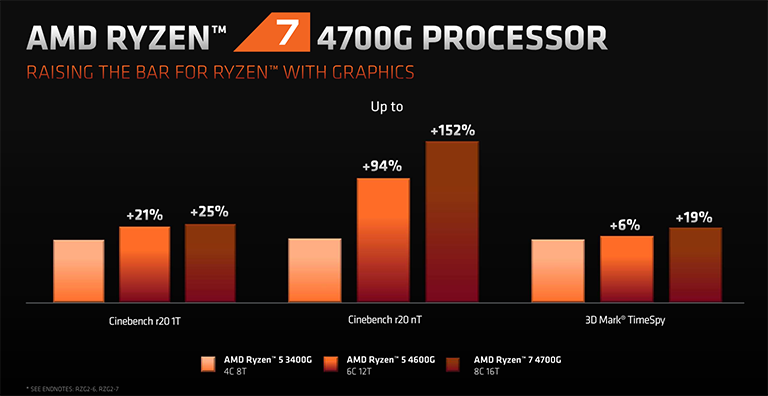 A rather more instructive comparison is against its own 3000-series Ryzens with baked-in graphics. Released last October, the Ryzen 5 3400G is no slouch in the CPU or IGP departments. Having both more and better cores for these 4000 G-series processors is highlighted in much better CPU performance - the core-and-thread count is up to double - though graphics performance increases are modest. That's because these new Ryzens actually have fewer cores than 3400G - 704 vs up to 512 - albeit they're clocked in much higher and have access to faster system memory, whose speed is to be confirmed by AMD later on. 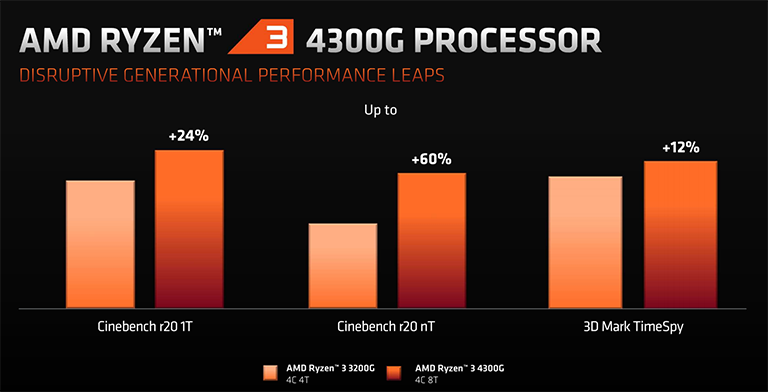 The same story is evident when looking further down the stack, too, though the differences are not as stark for Ryzen 3 iterations. CPU performance still jumps up a fair bit due to the combination of SMT and Zen 2 cores instead of Zen+. Graphics, meanwhile, use the same Vega architecture in the fewer-cores-but-higher-frequency approach. 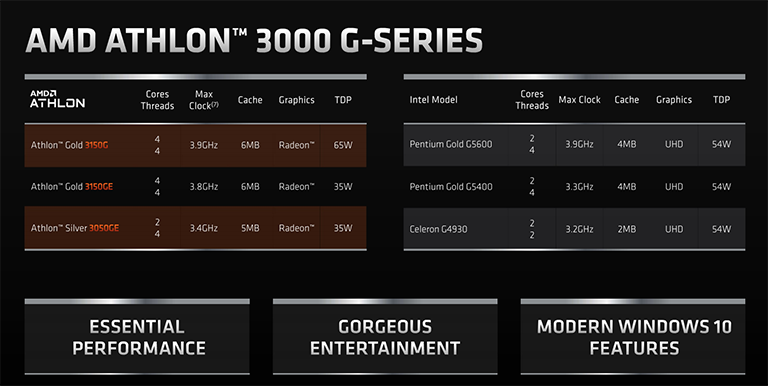 And to give OEMs the broadest possible choice for mainstream systems, AMD is also debuting Athlon 3000 G-series chips to go up against the Intel Pentium and Celerons that remain pervasive at the entry level. Built using the Zen+ architecture and now offering up to four cores, details are sketchier for these inexpensive models.

Coming to the big boys of the OEM world first, with system availability timed to tap into the needs of the growing number of people working from home for obvious reasons, we hope AMD does release the aftermarket DIY models in short order.

These are Windows laptops powered by the latest Qualcomm Snapdragon SoCs.

I don't need 12 threads I need more GPU power for a tiny build.

Give me a 4c/8t CPU with 12 Vega cores pretty please.
Posted by Hoonigan - Tue 21 Jul 2020 14:38
I've got a 3200G paired with an X570, 16GB of RAM and an NVMe SSD in my server. I've got Plex running on it and it runs great, especially when Plex is able to transcode the files on the VEGA8 GPU, but I really need some extra cores for when more than one person is using it.

The 4700GE would do me absolutely perfect. 35W TDP, 8c/16t and a VEGA8 with a little bit more performance. That could handle a couple of 2160p transcodes without issue.
Posted by DanceswithUnix - Tue 21 Jul 2020 16:21
It could be quite promising that AMD are having to hand all their chips over to the OEMs if that means they are getting good sales traction. Let's hope the resulting machines are decent.

nwmark
Only 6% improvement in 3D Mark TimeSpy for the Ryzen 5 (3400G vs 4600G) is really disappointing I was hoping for a much bigger GPU improvement.

I don't need 12 threads I need more GPU power for a tiny build.

The jump from 7 to 8 Vega cores seems to add another 13% performance. If you make the leap that it scales well, 12 Vega CUs will give another 4*13 = 52% on top of the 19% uplift already, so 71% faster than the 3400G in that benchmark. Is that really enough? I think if I cared that much about graphics then for starters I would want the extra CPU threads so you can't rob silicon from there, and frankly I would probably just go for a proper (possibly laptop) GPU added on.
Posted by nwmark - Tue 21 Jul 2020 17:38

DanceswithUnix
It could be quite promising that AMD are having to hand all their chips over to the OEMs if that means they are getting good sales traction. Let's hope the resulting machines are decent.

The jump from 7 to 8 Vega cores seems to add another 13% performance. If you make the leap that it scales well, 12 Vega CUs will give another 4*13 = 52% on top of the 19% uplift already, so 71% faster than the 3400G in that benchmark. Is that really enough? I think if I cared that much about graphics then for starters I would want the extra CPU threads so you can't rob silicon from there, and frankly I would probably just go for a proper (possibly laptop) GPU added on.

When real gaming benchmarks are released the performance benefit over the equivalent 3000 series chips (3400G vs 4600G) will be negligible which is a disappointment.
Posted by scaryjim - Tue 21 Jul 2020 18:42

nwmark
… When real gaming benchmarks are released the performance benefit over the equivalent 3000 series chips (3400G vs 4600G) will be negligible which is a disappointment.

Why? These aren't marketed as hard-core gaming chips. They're CPUs with adequate graphics to play 1080p low quality e-sports titles. They'll already match or beat an RX 550 - the previous generation managed that - so you're getting dGPU performance. If you *need* more than that, buy a dGPU.

Besides, they're still sharing dual-channel DDR4 memory - officially limited to 3200MT/s - with the CPU. The previous generation were already being partially bottlenecked by the memory interface (they got a decent boost from memory overclocks). AMD aren't stupid - they'll have done the calculations on the diminishing returns they'll get from trying to cram more GPU power through limited memory bandwidth. Why waste silicon on another CU if it's going to be memory-starved?