Announced on April 30, Intel is today letting loose a wide range of 10th Gen Core processors. Built to proliferate the mainstream market, 24 chips are available, priced between $122 and $488.

We have covered the general announcement and technology in a previous piece, but given this is the official press review - benchmark numbers and comparisons - it makes sense to retread important ground.

10th Gen Core processors, codenamed Comet Lake S, are built on 14nm process that has been steadily refined from its first outing in the Broadwell generation of 2015. That is a long time to remain on a process, no matter how much Intel has tinkered and improved it, while rival AMD has made significant strides with the brand-new Zen architecture and cutting-edge 7nm technology.

There are fundamental differences between this generation of consumer processors and the last. Extending the mainstream reach, Intel pushes the maximum core-and-thread count from 8C16T to 10C20T here - a 25 percent increase which will be most keenly felt in rendering tasks. Improvements in process efficiency enable 10th Gen CPUs to scale to higher frequencies, too, which is a boon for gaming, so there's good reason why Intel ought to be more bullish about 10th Gen prospects.

Then there's hyperthreading throughout the entire stack, meaning that all Core i3 chips operate under a 4C8T umbrella, Core i5 harness 6C12T, Core i7 uses 8C16T and Core i9 jumps on the 10C20T train. That is both sensible and much needed to stave off the burgeoning Ryzen threat.

Intel further improves thermals and headroom by using thinner silicon and thicker heatspreaders for this line, and as expected, a number of chips are also offered without baked-in graphics, denoted by the F suffix. With respect to minor improvements, Core i7 and Core i9 chips' official memory speed is increased to 2,933MHz, up from a maximum 2,666MHz on the 9th Gen models.

There's more of everything that matters. It's absolutely instructive to see how the various offering line up by bringing forth the Table.

A lot going on here, particularly with suffixes. Any chip with a K in the name is multiplier-unlocked and is able to be manually overclocked. An F is otherwise identical to the regular part but denotes a lack of UHD 630 graphics, ostensibly for those that are running with discrete graphics and require the most cost-effective solution. It makes more sense to have these products higher up in the stack, as Intel duly does. T, meanwhile, drops the power budget considerably, right down to 35W, along with commensurate reductions in frequency.

We'd previously lamented so few K-series chips. That is no longer the case as the internal boosting smarts, such as Thermal Velocity Boost (TVB) available on Core i9 and Turbo Boost Max 3.0 on Core i9 and Core i7, do a good job of pushing frequencies close to the wire. It's good to see a turbo clock in excess of 5GHz on six processors, while the mandated all-core frequency is definitely more handsome on this generation than the last.

The headline Core i9-10900K is actually able to boost up to 5.3GHz turbo and 4.9GHz all-core with TVB active, which happens if the cooling solution is robust enough to keep load temperature below 70°C. 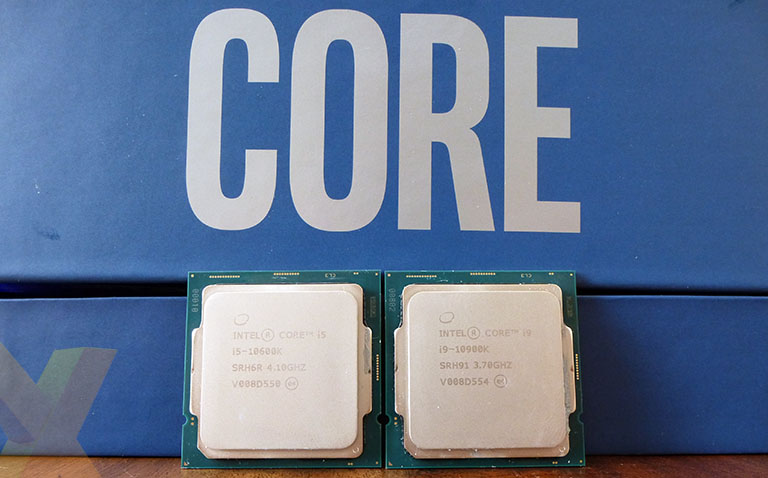 A few callouts. The Core i9-10900 is a great bet for a performance system housed in a small, quiet chassis, thanks to its meagre 65W TDP. Core i7-10700T's 35W power bodes even better for those that love quiet computing. We don't see why Intel needs so much power for the Core i5-10600K(F) processors. Given the pricing, all hyperthreading-infused Core i3 chips are, on paper, really solid bets for budget builds.

Overall, then, whilst there is no manifestly new technology here, Intel's 10th Gen CPU stack makes a lot more sense than previous families. One question is how these models compare against the latest and greatest Ryzens from AMD. We're glad you asked.

Pretty well, actually. The core-and-thread count is similar across varying price points. AMD holds the higher performance ground with Ryzen 9 3950X and, to some extent, 3900X, yet the bulk of the mainstream stack is competitive, especially as Intel typically offers higher frequencies that offset any architecture advantages AMD enjoys with Zen 2.

The one wrinkle, and it is a rather large one at that, is that enjoying 10th Gen Core on your desktop requires further investment into a 400-series chipset. Intel chooses to move to an LGA 1200 form factor for these processors, which is the same as upcoming Rocket Lake and Ice Lake architectures. This also means that present CPUs on LGA 1151v2 won't work on the new boards.

That's a big deal. One would expect Intel to up the specification ante on Z490 to match what AMD offers on X570. That's not the case, however, as other than obvious support for LGA 1200 chips, there's not a lot else that's new. About all that can be said right now is that range-topping Z490, the logical successor to Z390, offers support for Intel's Ethernet i225 controller (Foxville), baked-in Wi-Fi 6 AX201 compatibility if the motherboard manufacturer chooses to take up CNVi properties, and memory frequency at DDR4-2933 speeds for Core i7 and Core i9.

More cores, hyperthreading across the entire range, and higher frequencies mark out the key improvements of 10th Gen Core over its immediate predecessor. The stack matches up well against the Ryzen 3rd Gen offerings, at least on paper.