On Friday, Huawei held its keynote address at IFA 2018, Berlin. The Chinese technology giant announced a range of interesting smartphones, smart home devices, and a new flagship SoC – the Kirin 980. The headline claim behind the new Kirin 980 is that it is the world’s first 7nm mobile SoC, it is among the first fruit of TSMC’s 7nm process. With 6.9 billion transistors, 1.6x more than the Kirin 970, Huawei claims that the new processor combines best-in-class performance, efficiency, connectivity features, and a Dual NPU for AI processing power.

In terms of the performance increase you should expect compared to the previous gen (10nm), Huawei says that the Kirin 980 delivers 20 per cent improved SoC performance and 40 per cent improved SoC power efficiency. The CPU cores are; two super-big cores based on Cortex-A76, two big cores based on Cortex-A76, and four little cores Cortex-A55 and utilise an intelligent Flex-scheduling mechanism – a significant refinement over big.LITTLE, says Huawei.

Elsewhere in the SoC are: 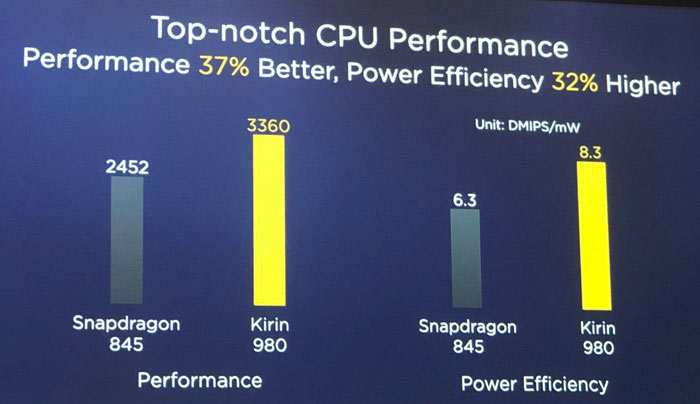 If you are interested in some comparative benchmarks featuring the Kirin 980, during its keynote Huawei showed that its new processor achieved a Geekbench 4 single-core score of 3360, compared to 2452 for the Qualcomm Snapdragon 845, but still slower than the Apple A11 which achieves 4207.

Devices powered by the Kirin 980

Huawei emailed HEXUS to announce that it was preparing to release several new devices featuring the new 7nm flagship SoC. The first such devices will be the Mate 20 series of phones, launching 16th October, 2018. Furthermore, the Honor Magic 2 will come packing the Kirin 980.

The best example for the kind of differences that you can have is latest Phoronix test Windows/Linux where Linux was faster, sometimes by a lot on the very same hardware!

So we do not know what kind of performance Kirin and Snapdragon would have under iOS.
Posted by devBunny - Mon 03 Sep 2018 12:35

The Most Powerful and Intelligent, Ever

I guess that also makes it The Most Hyped, Ever.
Posted by philehidiot - Mon 03 Sep 2018 12:41
I'll believe that 48% faster with a 178% efficiency increase when I see it measured and there isn't a magical planetary alignment of dry humping unicorns whose horoscopes have all come true.
Posted by kompukare - Mon 03 Sep 2018 12:48
6.9 billion is pretty big even if it is a full SOC.
Ryzen is around 5 billion for example.
Guess that would also mean that a straight port of Ryzen to 7nm would be under 100mm².
Posted by Usernamist - Mon 03 Sep 2018 14:10

darcotech
Well, CPU wise, we don't really know if Apple's A11 is really faster as it runs on different OS.

The best example for the kind of differences that you can have is latest Phoronix test Windows/Linux where Linux was faster, sometimes by a lot on the very same hardware!

So we do not know what kind of performance Kirin and Snapdragon would have under iOS.

Yes, for the most part, better OS = better performance, but it doesn't matter at all in this case because you can't choose your phone's OS. “Maybe the Kirin 980 would score better in iOS” is such a dumb, meaningless statement.