The visual design is predominantly black, inside and out, but with (red) illuminated accents either side of the mesh front panel. Pre-installed centre-front red LED fans fit in with the colour accents and “emphasise gaming” while keeping the costs for such eye candy down. Though these are monochrome lights, Cooler Master facilitates various effects. 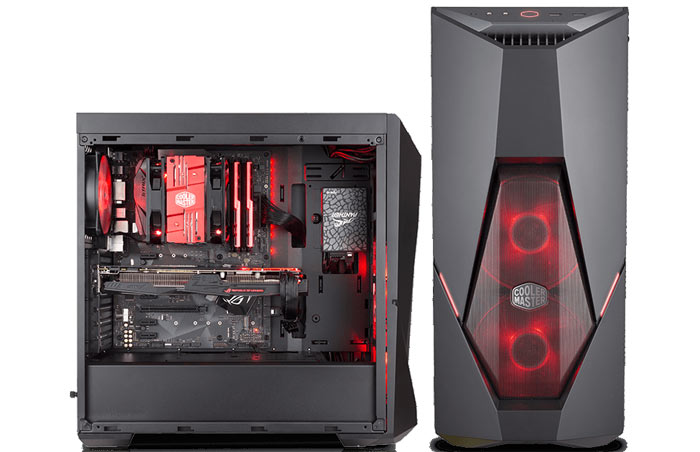 Gaming systems benefit from plenty of expansion room, considered airflow, and cooling possibilities and the MasterBox K500L, it is claimed, delivers all these attributes. The chassis measures 491 x 210 x 455mm and can fit either full sized ATX. Micro-ATX or Mini-ITX motherboards. It is possible to fit up to seven expansion cards and your GPU, for example, can be up to 400mm long. On the topic of maximum compatibility, users can fit CPU coolers up to 160mm tall, PSUs as long as 180mm, and radiators front (up to 240mm) and back (up to 120mm). Six 120mm fans are supported – with three red LED models already fitted (two front and one upper back). Overall there are plenty of air/liquid cooling options for the intended audience in addition to filtered vents back and top.

Neat cable management shouldn’t be too difficult with 19mm between the mainboard tray and right side panel. The enclosed black PSU area also helps you keep cable clutter away from admiring eyes. There is no 5.25-inch ODD bay but internal storage devices can be fitted as follows; 3.5-inch x2, 2.5-inch x6. Users have access to USB 3.0 x 2, Audio In / Out from the upper front panel, flanking the power button. 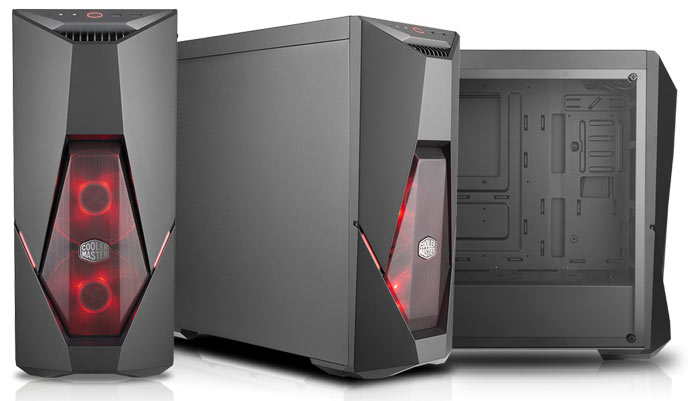 If you like the MasterBox K500L design but would be willing to pay extra for some more premium touches, Cooler Master is going to launch one more SKU at a later date. The pricier sibling will be fitted with a controller for RGB support, RGB illuminated accents, pre-installed RGB fans and power button, and a tempered glass side panel.

In an email to HEXUS, Cooler Master said the MasterBox K500L would be available imminently at an MSRP of £54.99.

Posted by Xlucine - Tue 01 May 2018 12:51
£55 for a case with 3 fans included is great value, shame that the CPU cooler clearance is a bit on the tight side. 160mm is a few mm tighter than is comfortable, this cooler master heatsink would only have 1.5mm clearance for example
Posted by azrael- - Wed 02 May 2018 06:08
As gamer cases go this isn't completely hideous. Still, it's not for me.
Posted by Korrorra - Wed 02 May 2018 07:42
Another 942 remake would be better than this ugly junk. Give it 6 HDD bays and make sure it can handle triple slot fan videocards and we are good to go.
Posted by Troopa - Wed 02 May 2018 13:03
3 fans is a nice touch, however it looks like it is priced. By that I mean 5/10 average, maybe a 6/10.
Coolermaster (like almost all other companies) didn't want to make something look better or prettier than the much more expensive alternative and designed this box with this is mind. The box looks like they chose a price-point and decided to reuse or make ultra-cheap components. Rather than try to make a top quality bang for buck product for the price point, they have deliberately made it suck relative to the much more expensive alternative and the components reflect this.