ASUS today announced the new A520 chipset motherboards for its TUF Gaming, Prime and Pro series. The AMD A520 chipset is the successor to the A320 chipset, and features PCIe® 3.0. Designed to cater to a wide range of needs, these motherboards feature a 32 MB BIOS flash ROM, and support future AMD Ryzen™ Zen 3 architecture CPUs and APUs.

ASUS A520 motherboards can be paired with an AMD APU to create a budget-friendly gaming rig or workstation, making them ideal for DIY PC users and small to medium-sized businesses.

ASUS is also pleased to announce that its R&D team broke the existing world memory frequency record, setting DDR4- 6666 on ROG Strix B550-I Gaming, using the AMD Ryzen 4700GE processor and Crucial Ballistix MAX memory.
In addition, the new BIOS updates for the complete lineup of AM4-based A520, X570 and B550 series motherboards are now available. The latest BIOS versions include the AGESA combo V2 PI 1.0.8.0 update, which is essential for future compatibility.

ASUS is committed to providing the best BIOS support, and will continue to optimise the BIOS to offer the best performance and user experience.

- Availability of new BIOS updates for A520, B550 and X570 series motherboards, essential future compatibility. 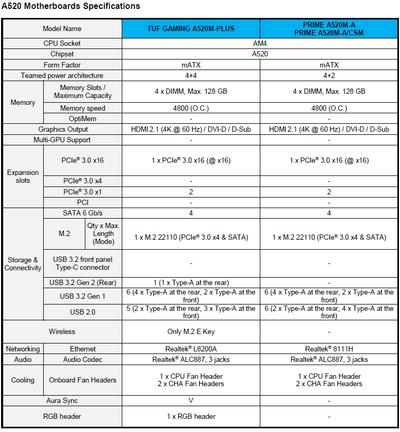