Such commentary still shouldn't take away the fact that GTX 1660 Ti is a fine GPU for PC base units costing south of a grand...

The GeForce GTX 1660 Ti is the first GPU to cleave the Turing architecture so that it doesn't feature RT and Tensor cores. Such a move is required for a couple of reasons: price and relative ineffectiveness of these forward-looking technologies on mainstream graphics cards.

Taken in isolation, GeForce GTX 1660 Ti is decent enough, offering excellent FHD performance and, more often than not, a good fist at QHD - all with the best in-game settings activated.

Yet our examination reveals a few home truths. The first is that the pace of innovation and performance uplift has slowed, evidenced by an across-the-board 40 per cent hike over GTX 1060 6GB - a GPU that's nearing its third birthday.

The numbers reveal the graphics improvement was greater between GTX 960 and GTX 1060, for all types of games, while the gap between introductions was a lot shorter. By rights, then, GTX 1660 Ti ought to have doubled the GTX 1060's performance.

The other cause for concern, and one that Nvidia can readily fix, is the GTX 1660 Ti's street price of $279 (£259), hampered further by the lack of a bundled triple-A game. Any GPU is good enough if priced correctly, so we recommend Nvidia look to hit £220 for base models, to fully differentiate them from the RTX 2060 and mostly nullify the price-reduction threat, however temporary, from AMD's RX Vega 56 and, looking further down the line, cheap-as-chips RX 580.

Such commentary still shouldn't take away the fact that GeForce GTX 1660 Ti is a fine GPU for PC base units costing south of a grand, and it offers up to 3x improvement over gaming cards released in 2015, plus the ability to run in very small systems without undue noise, power, or excess temperature.

Though not representing the handsome inter-generational performance leaps as before - a trend that will likely continue - we don't actually begrudge the GTX 1660 Ti's gaming credentials. What we would like to see, however, sooner rather than later, is Nvidia positioning it correctly with due knowledge of market conditions. Hit closer to £200 for it to become as popular as the GTX 1060 6GB, please, Nvidia, though that move would cause further segmentation headaches for the upcoming GTX 1660 and GTX 1650. 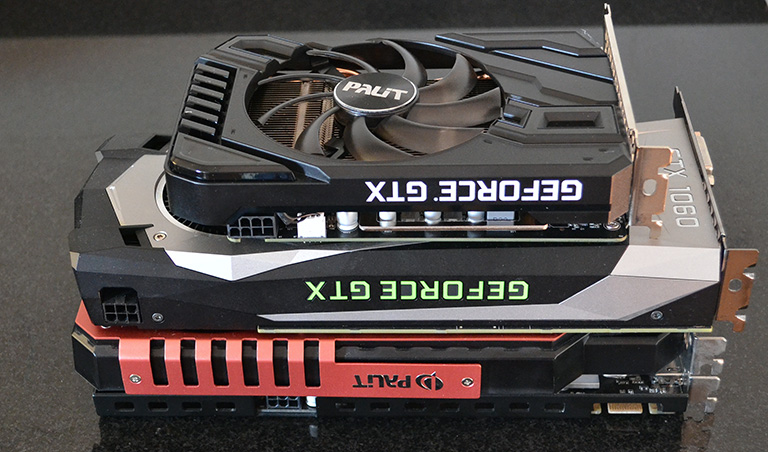 I fear fuel has been added to the flame war….

As you say, a good enough card but without good enough pricing. Given the relatively minor refinements AMD have made to their mid range cards, they'll have saved a fortune on R&D and probably have a lot more pricing flexibility than Nvidia who have just spent a fortune on their (currently disappointing for me) new tech.
Posted by DanceswithUnix - Tue 26 Feb 2019 20:54

The numbers reveal the graphics improvement was greater between GTX 960 and GTX 1060, for all types of games, while the gap between introductions was a lot shorter. By rights, then, GTX 1660 Ti ought to have doubled the GTX 1060's performance.

960 was a 28nm design, 20nm didn't happen for GPUs, we went straight to 14nm/16nm.
So 960 to 1060 was no less than two full process shrinks, and a change that we had been waiting *years* for as one 28nm product seemed to roll out after another. Now we drop to 12nm, but that's just a process tweak over 16nm and not actually a shrink at all.

So really, we can't expect the 1660 to be much faster than a 1060 unless it costs more, unless you expect the extra die size to come out of Nvidia's profits.

DanceswithUnix
I think it is a real shame that you didn't use a 4GB 960 card, other than as a warning to people thinking about buying 3GB 1060 cards that when GPUs hit a memory wall they hit it hard.

I had a GTX780 which had 3GB and it was definitely the memory which was the first limiting factor. It was a decent amount for the time but…..

I now have a Vega64 and I'm actually a little concerned that 8GB of VRAM just won't be enough in two years. And this card is budgeted for to last way more than that. I work on cost per year for things like this and so it's the cost over time that is important which means you take longevity into account. I do it with everything including motorbikes, razors and guns - realistically, how long is this going to serve my needs for and is it worth the investment? For a motorbike, an initial investment of a grand a year seems reasonable, for a razor…. well a straight edge will last longer than me and for a gun, well that depends on what range I'm shooting and so on. For some indoor ranges an air rifle works just fine and for others you need something with a little more poke but as skill increases you need something that you can take advantage of, which is where the initial investment over time comes in.

The reason I was rambling on about all that is that this article gives you an idea of how long a mid range card is going to be good for. We have a 4 year old mid range card which is simply put, NOT going to be any good in a modern system. Honestly trying to play Metro at 4K on that poor old thing was just mean. Made me feel like they were flogging a trusty old steed. So, it might be worth considering something faster that'll last longer but it might also work out a similar price over time to get a mid range card that suits your resolution and renew it in 2 years rather than 4-5. The rate of progress slowing is interesting and makes life very difficult. These days you might now expect quite a bit more life out of a mid range card as consoles slow progress and we've seen this from AMD where the mid range really doesn't get much more than a tickle and some more make up every year.

Mr Unix, sir. I think you're overthinking the situation from most purchaser's perspective. Imagine I'm a punter. Do I care about how many nanometers my transistors are or the EUV process and the (frankly utterly awesome) advancements in fabs to do this? No. I look at the performance I'm getting for the money I'm spending and if this performance isn't increasing in line with previous performance jumps whilst the price goes up, I'm going to feel screwed and concerned as to whether this performance jump is going to be enough to service future games for the life of my system…. again, remember a lot of purchasers of this kind of card buy the PC as and see the PC as a box that is binned and replaced when the box slows down (I remember when someone asked if, when I mentioned I build my own PCs, I choose the box, monitor, keyboard and mouse and put them together….).

I think there's also a difficulty in pitching these reviews. Me, you and many others on here get the technical challanges and so on because we take the interest. But Hexus is NOT an in depth technical review site. For that you need to look at Anandtech, etc (where I can read it, but it's mostly gibberish to me) and you can expect the technical challanges and details to be accounted for there. Whilst I expect that those working at Hexus do know and understand all of this stuff, I expect they also pitch their articles carefully and to go into such things might alienate a lot of their target audience. That is the tech savvy but interested more in the consumerism / performance side of a product rather than how it looks under an electron microscope.

The irony is, I probably spend more time reading about the technical details of GPUs than I do playing games whereas the 1660 is probably aimed at those people who actually play the damned games rather than reading what runs them…..

My last Nvidia card was the MSI GTX570, which cost about £300. My new one is the RTX 2080 FE which cost £750. Without looking at benchmarks I'm pretty certain I'm getting quite a bit more than a doubling of the performance, so although the price seems expensive, I'm not overly concerned. Plus when I had the 570 I was gaming at 1680x1050, now I'm gaming at 2560x1440. To me, it's a justifiable cost when I look back at what my old card could do.