Apple shared its latest set of financials yesterday evening after the bell. Investors didn't really like what they saw, and currently Apple's shares are about five per cent down in afterhours trading. However, it looks like just a short term shock - yes iPhone revenue was down by 20 per cent YoY but Apple has launched its model upgrades late this year and all the other segments of Apple's business enjoyed strong growth. Check out our coverage of the 'Hi, Speed' event from 14th October, with a discussion of the qualities and specs of the new iPhone 12 smartphones. A year earlier the iPhone 11 series was launched in early September. 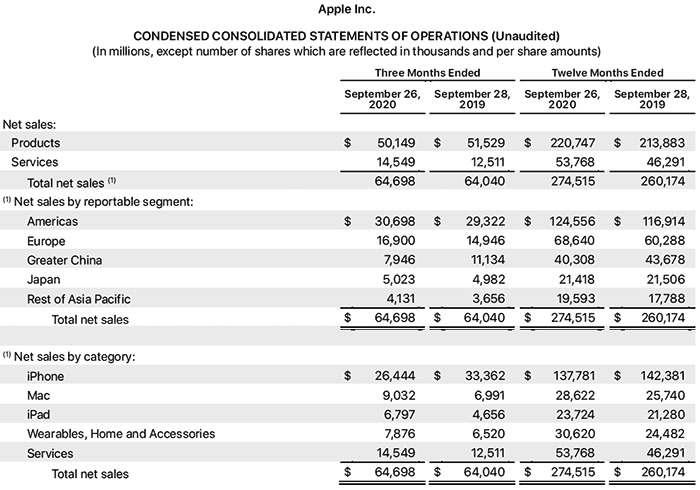 I've condensed the financial results into the chart above which shows my preferred metrics; revenue totals, revenue by region, and by business segment. Starting at the top of the table you can see that Apple's results were up overall, whether comparing the most recent quarter or year. In the lower part of the table you can see that all its operating segments bar iPhone (Mac, iPad, Wearables, and Services) enjoyed healthy growth. 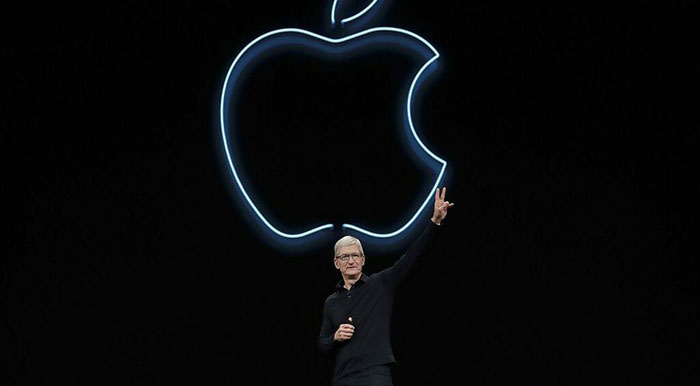 "Apple capped off a fiscal year defined by innovation in the face of adversity with a September quarter record, led by all-time records for Mac and Services," said Apple CEO, Tim Cook. Mr Cook went on to say Apple is in the middle of its "most prolific product introduction period ever," and says early response to the 5G enabled iPhone 12 lineup has been "tremendously positive". Cook couldn't resist blaming Covid-19 for malign impact upon Apple's business, but we have previously seen that the lockdowns precipitated by the pandemic have boosted WFH tech, personal tech, and tech services sales industry wide.

Going back to the financials table, in the mid-section you can see the regional revenue split. Net sales from all world regions were up in the most recent quarter, except for China where sales were sharply down. CBNC reports the China dip is very much tied to the late release of new iPhones this year. "A larger percentage of China revenue is made up of new iPhones," Mr Cook told a CNBC reporter, in explanation. Looking forward, Apple is confident that the next quarter will put its ship back on course but it is noted that Apple is 'supply constrained' - like lots of shiny new tech recently these devices just can't be made quickly enough.

Posted by nacasatu - Fri 30 Oct 2020 14:04
It's affecting delivery of Nvidia cards from China too as Apple are taking over the vast majority of commercial flights in order to get their iphones shipped around the world.
Posted by 3dcandy - Fri 30 Oct 2020 16:43

nacasatu
It's affecting delivery of Nvidia cards from China too as Apple are taking over the vast majority of commercial flights in order to get their iphones shipped around the world.

It's affecting everything… not just shiny iphones and NV overpriced cards ;)
Posted by Gentle Viking - Fri 30 Oct 2020 19:55
Services,,,,, thats not how it is spelled, it is spelled Slaves.
But at least people enlist without the need for a whip and chains,,,,,,, that come later in modern day slavery, and it only leave a mark on the wallet.
Posted by rave_alan - Sun 01 Nov 2020 20:54
I guess the latest design has something to do with it. Before it was an icon, now, just one among others with almost no differences.
Posted by 3dcandy - Mon 02 Nov 2020 07:42
Online videos showing how unrepairable the iphone 12 is. Can't change anything now because they are all locked to the phone. Can't change camera module or logic board because the phone then doesn't work properly….