Apple unveiled a trio of new smartphones at its Cupertino event on Tuesday. It is easier to understand the pecking order among the new generation devices; named the Apple iPhone 11, iPhone 11 Pro, and iPhone 11 Pro Max - and they all feature the common foundation of the new A13 Bionic chip and iOS 13. As well as the new phones, Apple took the wraps off the Watch Series 5, a new 10.2-inch iPad, and revealed more details about Apple TV+ and Apple Arcade.

The cheapest iPhone revealed on Tuesday was the iPhone 11. In brief it is built around a 6.1-inch all-screen (which has a customary wide notch) Liquid Retina display with wide colour support, True Tone, and haptic touch. It comes in six colours, and is rated IP68 for water resistance up to 2 meters for up to 30 minutes.

The iPhone 11 features a dual-camera system (wide and ultra-wide), with a new sensor which enables a useful Night Mode, Smart HDR, and Deep Fusion image processing enabled by the Neural Engine of A13 Bionic. This is in addition to the other shooting modes you already enjoy on iOS, such as the popular Portrait Mode.

On the topic of processing, the iPhone 11 (and the other Pro models launched simultaneously) feature the new A13 Bionic chip. Apple calls this SoC "the fastest chip ever in a smartphone that quickly handles the tasks that matter most to people every day". Its CPU and GPU are up to 20 per cent faster than the A12, with Neural Engine and Machine Learning Accelerators, as well as improved battery life. Check out Apple's CPU performance comparison graphs below…

Other features of the Apple iPhone 11 are the Gigabit-class LTE and Wi-Fi 6 plus dual-SIM and eSIM options, Face ID, Spatial Audio with Dolby Atmos, the Apple designed U1 speatial awareness chip.

iOS 13 includes a new Dark Mode, a private web site sign-in experience using 'Sign in with Apple', advanced camera and photos features with editing tools for both photos and videos. 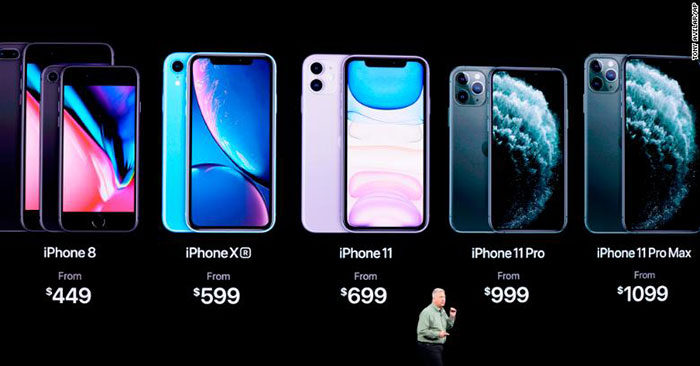 Apple takes the A13 processor and iOS 13 as used in the iPhone 11 but adds various premium features and frills to concoct the first 'Pro' level iPhones. Apple says the new pro line for iPhone "delivers advanced performance for users who want the very best smartphone". The biggest upgrades from the 'standard' are in screens, and the built-in camera systems.

With the iPhone 11 Pro/11 Pro Max you get a 5.8-/6.5-inch Super Retina XDR display. These are 'all screen' (notched) OLED panels with HDR wide colour gamut and 2m:1 typical contrast ratios. The max brightness of these screens is up to 1200nits.

Pro users get a triple camera array on the rear. Apple has selected an Ultra Wide, Wide and Telephoto camera which it says delivers "huge improvements to low-light photography," and is "far and away the best camera we've ever made," according to senior marketing VP Phil Schiller.

Construction is premium too, with textured matte glass back and polished stainless steel band, plus a choice of four colours; midnight green, space gray, silver and gold finishes. These are a bit more water-tight than the standard iPhone 11, with a rating of IP68 under IEC standard 60529 (maximum depth of 4 meters up to 30 minutes). 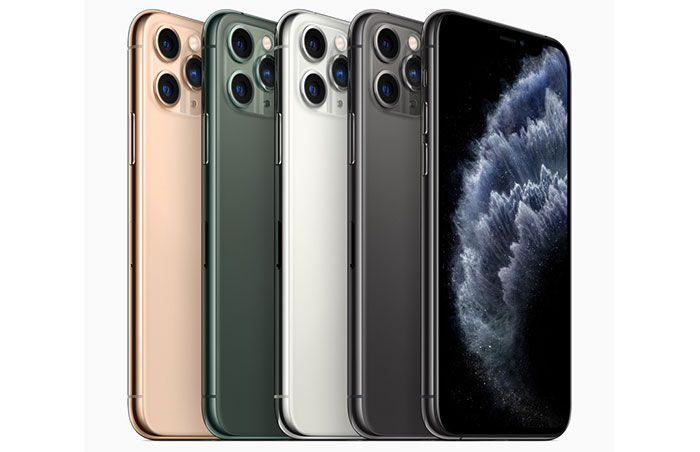 Posted by Gentle Viking - Wed 11 Sep 2019 00:36
Pass.
This brand of phones i hate 5% more than any other phone, and i am really looking forward to when i don't have to carry a phone, even when that mean my dear old mother die, cuz it is solely for her sake i carry my electronic pocket turd.

PS. when that time come i might go to a mobile internet,but i will not be talking over it, and it will probably reside in my car,,,, i am not going to be carrying it around.

See. that's truly special and unique, something a phone will never make you though Apple i am sure will claim that.
Posted by FRISH - Wed 11 Sep 2019 03:52
I really don't get why iphones are so popular. Over a grand and you still only get 64GB of storage… It's kind of a shame that windows phone flopped since android phones have also crept up, though at least you do actually have a wide variety of decent options.
Posted by rob4001 - Wed 11 Sep 2019 04:00
Iphone 8 for 449 isn't bad its a nice phone good chip in it. I have an iphone I also had android nexus phones most of my family had iphones I switched it was easier facetime and all that. I quite like my iphone expensive yes but I don't buy one every year.
Posted by Gh0sty - Wed 11 Sep 2019 06:30
OOOOH a new iphone… MEH! I though apple were supposed to be masters of phone design, wtf is that camera lens bundle on the back? It looks like the 3 heads off a philishave eletric razor have been grafted on the back. Is the phone 5G capable, no, so you launch a new phone just as new technology is out there, admittedly in its infancy, you totally missed a trick there apple. Another underwhelming product launch from Apple.
Posted by spacein_vader - Wed 11 Sep 2019 06:48

Gh0sty
OOOOH a new iphone… MEH! I though apple were supposed to be masters of phone design, wtf is that camera lens bundle on the back? It looks like the 3 heads off a philishave eletric razor have been grafted on the back. Is the phone 5G capable, no, so you launch a new phone just as new technology is out there, admittedly in its infancy, you totally missed a trick there apple. Another underwhelming product launch from Apple.

To be fair to Apple it's been some years since anyone did a phone launch that wasn't underwhelming. The phone market has been saturated and ran out of killer new features some years ago now