Last month, HEXUS reported on Xbox Cloud Gaming becoming available in the Xbox App for Windows Insiders. Now this level of service has gone mainstream, so anyone with a Windows 10 PC or newer can fire up the Xbox app and play titles from the Xbox Game Pass, from the cloud. Previously, Windows users had to access their Xbox cloud gaming fun via a browser. Additionally, if you own an Xbox you can also now play games directly from your console using your PC, the new Xbox app, and Xbox remote play. 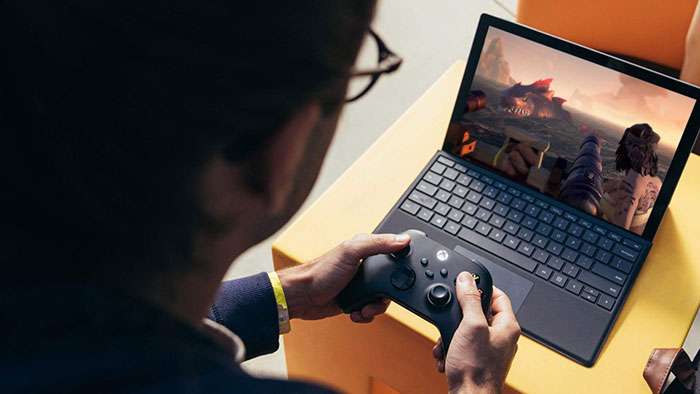 Microsoft puts forward a number of reasonable scenarios where using a PC to play Xbox games might be an appealing choice;

If the above situation(s) affect you, then using the updated Xbox App on Windows to play titles from the Xbox Game Pass library may well appeal. However, this way of gaming comes with some provisos of its own. Requirements include; an Xbox Game Pass Ultimate membership, and a compatible controller. Of course, for cloud gaming, a fast low latency internet connection is also very important. This is one of the hardest conditions to satisfy when travelling, even in this '5G era'.

With the Xbox app update for Windows, Microsoft has taken the chance to bring forward a few other improvements. With the new app you will see "easy-to-access information on controller and network status, Game Bar integration, social features to stay connected with friends, and the ability to invite people – even those also playing on cloud – to join you in a game," explains Microsoft.

The new Xbox app also enables Xbox Remote Play from Xbox Series X/ S, or any generation of Xbox One. This feature continues to work whether you are at home, or away and is essentially a console screen mirror service - thus it doesn't need a subscription of any kind either. Again, Microsoft has taken the opportunity to enhance the experience with this introduction. Specifically, it has delivered general stability updates, allows for games to stream at 1080p up to 60fps, and has added the ability to play select Xbox 360 and Xbox Original games from your library this way.

KultiVator
Hmmm… I feel a testing session coming on after work.

I was thinking of getting a series x, but if I can stream fast enough it might be worth using my PC instead. Let us know your results :)
Posted by KultiVator - Thu 16 Sep 2021 00:30

KultiVator
Hmmm… I feel a testing session coming on after work.

I was thinking of getting a series x, but if I can stream fast enough it might be worth using my PC instead. Let us know your results :)

Pretty impressed - controller rumble is now implemented (something that was lacking in the browser-based incarnations of xCloud so far) and injects more life back into the games I tested tonight.

Gears of War 5 felt fluid and looked decent on a Surface Pro 7 (which lacks the GPU grunt to play this natively). Same went for Forza Horizon 4 (which I can just about run natively on the Surface, though at terrible levels of detail and chuggy framerates).

The new AquaNauts game looked particularly good - the resolution appeared to be higher than some of the other games I tested - maybe because this is a proper next-gen title running on the new Xbox Series X blades in the Microsoft DataCentre?

All streams held up really well - with only one particularly dark tunnel sequence in Gears of War 5 exhibiting some mildly distracting compression-related blockiness for a spell. My wife was also streaming - so I can't rule that out as being a factor.

I don't believe Flight Simulator is listed at present - which is a shame - but other than that, GamePass continues to offer a large library of games and there's some real gems amongst them.

Would I want to use this as my main source of games - probably not… but great as a secondary form of gaming that you can dip into from any corner of the house where you can plonk yourself with your laptop/tablet of choice - and if it runs this well on a Surface Pro 7, it bodes well for laptops with beefier internals.

I look forward to testing this more extensively over the coming days… keen to see whether a wired Ethernet connection makes much difference.