As it teased previously, EA revealed the next Battlefield game in the franchise. Battlefield 2042 is scheduled for release on 22nd October 2021. From the name you will have deduced it is set in the near-future world, and it is 100 years before Battlefield 2142, a game which was released back in 2006. Before going on, it is worth highlighting some of the biggest news items from the reveal; there is no single player campaign, multiplayer counts have been doubled to 128, and there are character classes that contain specialists (choice of 10 at launch).

The explosive official reveal trailer above is said to use actual gameplay footage in its construction. However, a first full game play trailer is scheduled for this Sunday, 13th June, if you are eager to digest more.

Watching through the video one gets the impression that EA sees the near future WWIII as a theatre of war featuring wing suits, militarised robot dogs, and cataclysmic climate change induced weather appearing at random. Yes, there will be more traditional military vehicles too; like tanks, hovercraft, helicopters, fighter jets, and tuk tuks… And as a soldier you will get plenty of weapon choices covering submachine guns, assault rifles, LMGs, shotguns, and so on. 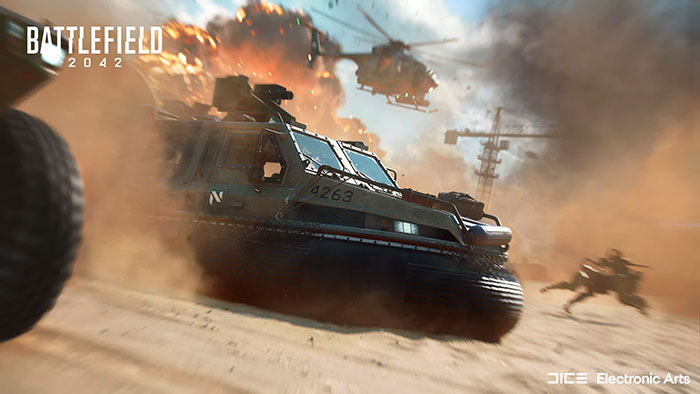 Maps will be bigger than ever and ready for the "all-out war experience of Battlefield 2042". The game launches with seven maps and each battlefield has multiple distinct combat areas in a single play space. Another big feature in Battlefield 2042 will be the dynamic world that the action takes place in. EA foresees extreme weather events and resource conflicts being big news in 2042 and the changeable environment caused by weather and the general destruction of battle will shape your combat environment.

I mentioned in the intro that there is no single-player story to play through here. There isn't a BR mode yet, either. Modes that will be available from the get go include; Conquest, Breakthrough, Hazard Zone for squad based play, and a yet to be revealed mode which will be unwrapped on 22nd July at EA Play Live.

A new specialist system will help you make character choice to suit your playstyle. Based on Battlefield's four classes, specialists have one unique speciality and trait – but the rest of the loadout is fully customisable. Battlefield 2042 launches with 10 specialists. Again, EA has chosen to only partially reveal this info, so we can only see four specialists described at this time, covering the recon, assault, support, and engineer classes.

In the wake of Sunday's gameplay trailer, the next noteworthy event on the path to launch will be a Battlefield 2042 technical test in early July, which will be available to "players identified as Battlefield veterans." Still ahead of launch, there will be Hazard Zone early access period, and an open-beta for pre-order customers. 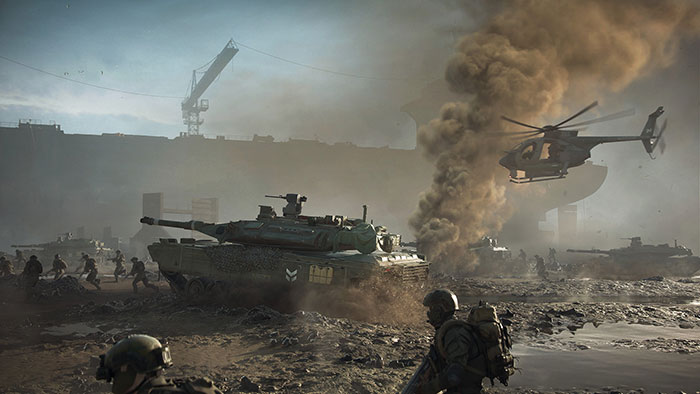 spacein_vader
Battlefield is becoming Just Cause?

What they showed in the trailer is effectively where BF starts (serious, battles, squaddies) and then owning where BF ends up which is just gamers being creative and silly.

I don't quite get where the Just Cause comparison is coming from, is it because of the Wingsuit?
Posted by KultiVator - Thu 10 Jun 2021 11:10
Looks stunning - as Dice Games always do… would love to believe the minute-to-minute gameplay doesn't suck as badly as the recent titles in this franchise.

On the back-burner for me until I've read some impartial reviews.
Posted by Gentle Viking - Thu 10 Jun 2021 11:29
Not something i would be interested in playing i am sure.

i was looking forward to BF but not for this.