It was leaked earlier this week so wasn't such a big surprise but Ubisoft officially took the wraps off Hyper Scape yesterday evening. This game is a futuristic FPS which embraces f2p and Battle Royale gameplay. Designed and developed by Ubisoft Montreal, it is hopes that Hyper Scape will be very popular with streamers and thus tight Twitch integration is built-in from the offset. In line with these aspirations, the Hyper Scape unveiling wasn't the traditional industry event but was via the medium of a streamer-driven event on Twitch and YouTube. 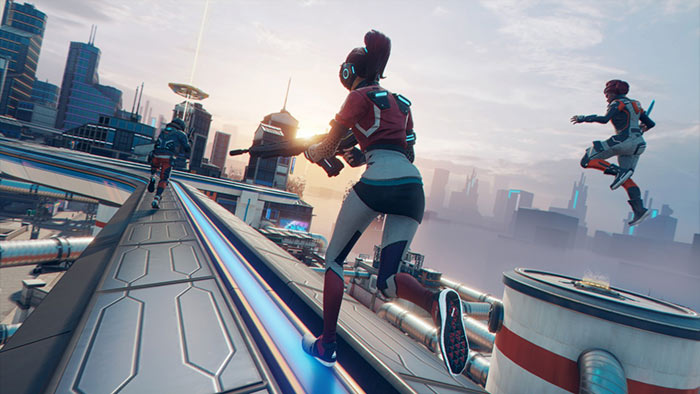 Ubisoft is just the latest games publisher to try and crack the Battle Royale FPS market with its own special sauce smothered take on the genre. It chose not to exploit an existing IP from its sizable stables but created the all-new Hyper Scape, set in the gleaming skyscraper packed city of Neo Arcadia in 2054.

Thankfully, for those who didn't tune in to the streaming-reveal, Ubisoft provides a snappy overview of Hyper Scape in the gameplay overview trailer which I've embedded below. This talks you through the premise of the game on offer, highlighting its 'fresh take' and discusses how the game will evolve.

One of the key aspects of playing in Hyper Scape is adapting to the 'verticality' of the game. I previously mentioned the city environment that is packed with skyscrapers, your character will bound great heights super-hero like, and huge jumps can be facilitated by various environmental objects and light pads that propel you into the air when you pass over them. A lot of the action in the video shows the gamer shooting at opponents while in mid-air.

You will play the 100-player challenges solo or in a squad. To start with you are deployed in a pod and you can aim your pod anywhere in the city you wish. Areas with concentrations of high level weapons will be hotly contested - but you only start with a melee weapon so you will want to gear up quick. Looting for better weapons and 'hacks' is part of the game and if you find duplicates you can combine them to upgrade to a higher-tier via 'Fusion'.

Deceased team members can stay involved by being 'echo' sprites scouting ahead for your team. When subsequently an enemy is eliminated squad members can reanimate your character at that point. Also watch out for great loot drops from those eliminated.

As play progresses the 'Blight' progressively dissolves Neo Arcadia's districts, in varied patterns, so you will have to watch out for that and keep moving. When/if you make it to the final few remaining players gameplay takes a turn in the 'Showdown' which can be tackled with all guns blazing or a more tactical approach to gaining the Hyper Scape Crown.

PC gamers who are interested in Hyper Scape can take part in some early game testing. To do so you must participate in the Hyper Scape Technical Test Twitch Drops which continue until 7th July. You will need both a Ubisoft and Twitch account to get in line for this. Any progress you make in these test versions will be carried over into the final launch game.