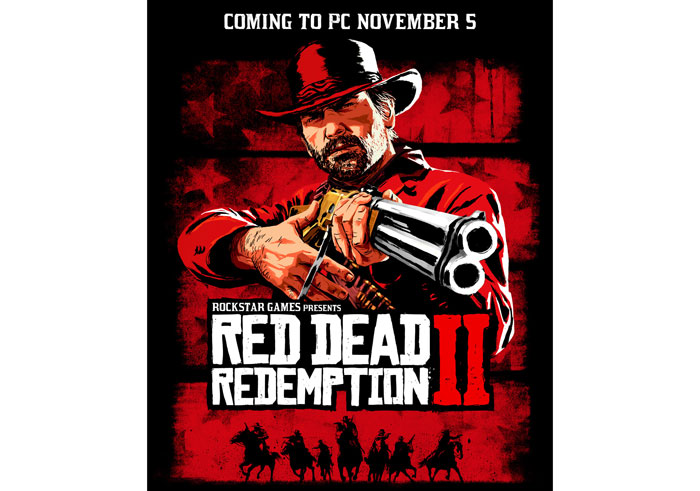 PC enhancements are being promised for the game. Rockstar says PC users will see "a range of graphical and technical enhancements for increased immersion along with new Bounty Hunting Missions, Gang Hideouts, Weapons and more". As one would expect the PC game also provides access to he shared living world of Red Dead Online featuring all previously released improvements and the latest content updates for the complete online experience. Online you can take part in frontier pursuits and more – progressing and earning rewards.

Rockstar is clearly steering PC gamers towards using its new launcher platform to purchase Red Dead Redemption 2. It is making the game available for pre-purchase via its launcher from Wednesday, 9th Oct. Furthermore, it is giving away various freebies to those willing to pony-up on the new game for the PC platform.

Other bonuses that might attract you buy via Rockstar Games Launcher are free upgrade options to the Premium Editions of Red Dead Redemption 2, with both the Special Edition and Ultimate Edition discounted by $20 each. There are further bonuses to be had like an Outlaw Survival Kit for story mode a treasure map, plus in-game currency.

RDR2 isn't exclusive to Rockstar's own launcher, it will be made available via EGS, Greenman Gaming, Humble Store, GameStop and other digital retailers for pre-order from 23rd Oct. Steam users will get their mitts on the game in December.

Lastly, RDR2 will be a launch title for Google Stadia in November. Cloud streaming platform Stadia is Linux-server based, and is powered by AMD GPUs using the Vulkan API.

Posted by Bagpuss - Mon 07 Oct 2019 11:06
What incentive is their to wait for the Steam version when launching the game from Steam will then just launch the Rockstar client as well? as is the case when now launching GTA V from Steam.

Very shady practice.
Posted by EvilCycle - Mon 07 Oct 2019 11:19
It is no different from what Ubisoft have been doing for a long time now, I agree it sucks but the incentive to wait for steam is so that you and your steam friends can join up and play together from that platform easily and use the steam overlay features (chat etc.) some people may even find it important to have your hours played logged there and to also have it added in your game library next to your other steam games. Personally I am just going to get it through the Rockstar launcher to save some background resources when playing but I can see why some people would wait for steam (especially over buying it from the epic store which I imagine would still require the Rockstar launcher too).
Posted by spacein_vader - Mon 07 Oct 2019 12:31
I'll be waiting for the Steam version. Not because I have a fixation with only having the One True Launcher to the exclusion of all others but because I have the non Steam version of GTA V ands its way more hassle to get it working under Linux than the Steam version.
Posted by mattc - Mon 07 Oct 2019 12:45
SteamLink is one of the main reasons for me.. being able to play RDR2 on the TV will be pretty cool. Family Sharing in Steam is useful when my kids want a game from my library.
Posted by Scryder - Mon 07 Oct 2019 19:14

I'll be doing the same, for the same reason, as most of my games are on Steam. And I waited this long, a while longer won't make a difference.