Ubisoft has wrapped up its E3 2019 presentation after quite a few important announcements. Probably the biggest news from the #UBIE3 2019 press conference was the announcement of the UPlay+ subscription service (PC Only). Other big news was the unveiling of Watch Dogs Legion, Ghost Recon: Breakpoint, plus announcements of Rainbow Six Quarantine, Assassin's Creed Odyssey's free story creator mode, and some free episodes are on the way for players of The Division 2. 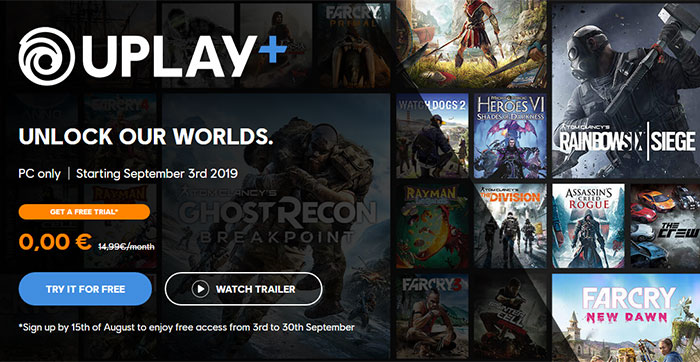 This PC only subscription service will start from 3rd September. Ubisoft's offering sounds quite similar to others in the market. You will have access to; 100+ PC games from Ubisoft's ever growing library of titles, as a subscriber you can access the premium editions with all the newest DLCs and expansions, you will be among the first to get new releases (3 days early access) and participate in beta programs.

On the sign-up page as seen from the UK the price of €14.99 seems rather steep (it costs $14.99 in the US). However, if one signs up before 15th August you can try it for free from opening day (3rd Sept) until 30th Sept. There is no fixed term commitment, with the account possible to be terminated at any time. On the other wise of the coin, Ubisoft hasn't mentioned any extended rates - such as yearlong subscriptions. 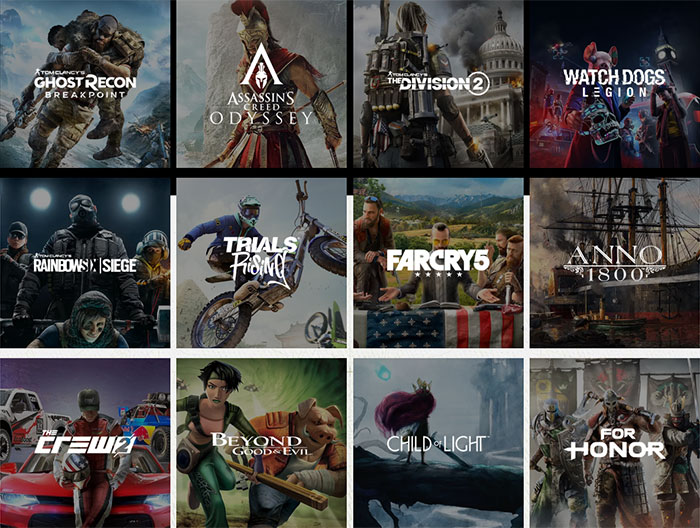 The appeal of this service greatly depends on your affinity for Ubisoft titles. The promo page highlights the above 12 titles from the 100+ that will be available to play. Though 'PC-only', Uplay+ works with Google Stadia.

Ubisoft announced some highly anticipated new games titles and plans for DLCs and expansions for some of its popular existing games. Watch Dogs: Legion is indeed set in London. The story is that a corrupt privatised military corporation called Albion imposes martial law on the civilians, gangs rule back alleys, and there's a surveillance camera for nearly every person. Hacker group DedSec sees the birth of this dystopia and steps in, aiming to free the people of London from violent oppression and subjugation. 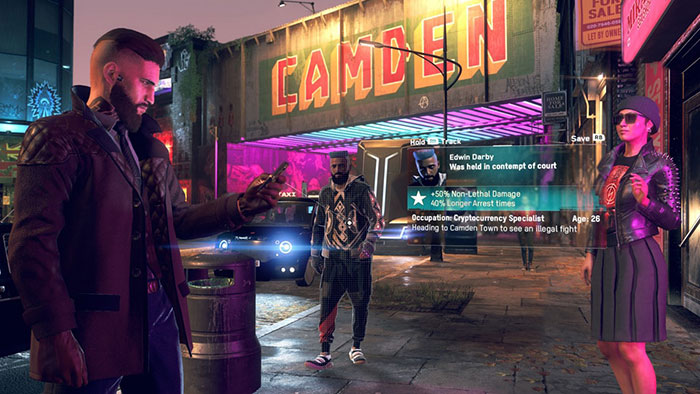 Central to the new game is that there is no main protagonist in Legion, as "every single character you encounter in the open world can be recruited to your cause and become a fully playable character". Though it is possible to assemble your team from a selection of "hacker grandmas," Ubisoft suggests you diversify your squad based on their unique traits, "which provide various boosts and nerfs to particular gameplay attributes". Furthermore, each team member will be assigned a distinct class; Enforcer, Infiltrator, or Hacker.

Other big announcements at E3 included the following:

You can see all the trailers and videos Ubisoft published during E3 via its YouTube channel.

that might work!
Posted by MonkFish - Tue 11 Jun 2019 11:24
My initial thoughts are this is too expensive. Are there still micro transactions in the subscription software? As said above a single month may be ok but I imagine they want you hooked, to sub for multiple months. This is the latest cash grab by large publishers. Coming soon will be Kickstarter style funding to remove the risk from making games (on top of the pre orders)
Posted by Moonister - Tue 11 Jun 2019 11:57

Zak33
If this turn out to be available for just single months… that's a great winter month of gaming! Sign up for 1 or 2 months and then unsub….

wishfull thinking mate…In a blood thirsty corporate world there is only one winner…and it's not you!
Posted by Spud1 - Tue 11 Jun 2019 13:09
Hmm $14.99 is just too expensive when it's a single platform imo, especially for Ubi's games. It's just as expensive (and just as over priced) as Origin Premier imo, but premier offers more games.

Microsoft are offering single platform for $9.99 a month which is about right, or $14.99 for multi platform. In practice its a lot cheaper than that due to the constant offers/deals MS are offering. I assume that as “gaming as a service” is still relatively new, we'll eventually see pricing settle based on the number of people that actually sign up to each service.

I will stick to gamepass only for now I think - I have way too many games to play as it is :)
Posted by Korrorra - Tue 11 Jun 2019 16:05
Bringing console crap subscription to PC. It's the end of the world.