Activision has announced the release date for the next Call of Duty, and provided a launch trailer and a smattering of game details. This time around Call of Duty: Black Ops 4 will ditch the single player campaign and instead focus on multiplayer. It has competitive multiplayer (including a last-player-standing battle royale mode), and a cooperative zombies mode set over three very different locations.

"Black Ops 4 doesn't have a traditional campaign, we're weaving narrative into each of the modes," said Mark Lamia, Treyarch chairman, during the staged announcement yesterday evening. The single player campaign seems to have been cut to devote resources to the greater number of multiplayer modes available.

The standout change this time is the inclusion of a last-player-standing mode called Blackout, to provide PUBG or Fortnite style gaming fun. However, players will of course be able to leverage Black Ops style combat mechanics, including air support, various CoD characters, Zombies, and maps from all four Black Ops games.

In its report on the game announcement, The Verge quotes an Activision source that indicated Call of Duty Black Ops 4 would be a side step in the series, and future outings would "return to the bombastic cinematic single-player modes players are used to". 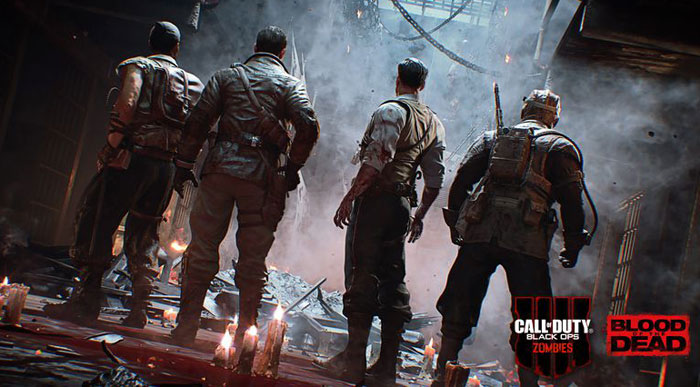 Zombie experiences are popular with players and Call of Duty Black Ops 4 will launch with three difference undead experiences. Thanks to the possibilities opened up by witchcraft you will be able to battle zombies in eras that appear to be linked to Roman Gladiator and Titanic eras…

On the PC, players will be able to enjoy features such as uncapped frame rates, and support for 4K resolution, HDR and ultrawide monitors. Weapon recoil and knockback for Black Ops 4 on PC was also designed for those playing with keyboard and mouse controls. "One of the things we’ve really wanted to focus on is PC gaming as its own unique platform, and really give PC gamers what they deserve," said Tryarch Studio Head Dan Bunting.

Call of Duty Black Ops 4 will be released worldwide on 12th October for PC, PS4 and Xbox One. Battlenet will be the exclusive distributor for Windows PC users.

Spud1
No campaign, no sale :( The multiplayer side of COD has been terrible for years - its a shame as I was enjoying the black ops storyline, and was going to buy this on PC…but not anymore.

The campaign has been awful too unless you enjoy constant prompts to follow your AI mates and holding F to pay respects.

If you want to know what the next year's COD will look like just see what the breakout hit from the previous autumn was.

The wallrunning stuff was a reaction to the perceived threat of Titanfall, last year's WW2 was to counter Battlefield 1 & now CodBlops4 is a response to plunkbat and Fortnite.
Posted by Iota - Fri 18 May 2018 17:30

spacein_vader
If you want to know what the next year's COD will look like just see what the breakout hit from the previous autumn was.

The wallrunning stuff was a reaction to the perceived threat of Titanfall, last year's WW2 was to counter Battlefield 1 & now CodBlops4 is a response to plunkbat and Fortnite.

Anyway, I haven't touched Call of Duty since MW2 dropped dedicated server support, I gave them the chance but the netcoding was attrocious. Haven't touched the series since, equally said, I'm glad they're bringing back servers but I think they're confused what “dedicated servers” actually means. Also, can this even be called “Call of Duty” without a campaign? I'll still pass. I'm not convinced they even understand the PC market anymore (where's my LEAN???)