Last week Google announced that Stadia was being prepared to launch with 12 games available to subscribers. The games streaming service would kick-off with access to just a dozen titles, with 14 more expected to be added to the roster before the end of 2019, wrote Google in a blog post.

Today, via Twitter, just a day ahead of the official launch of the service, Google VP and GM Phil Harrison, said that the launch lineup would be expanded with another 10 titles, bringing the total games streaming choice for early adoptees to 22.

All of the 'new' additions were originally scheduled to be added to the streaming service before 2019 was out, so have simply been pulled forward. There are still some big games to be added before 2020 though - Borderlands 3, Ghost Recon: Breakpoint, Dragon Ball: Xenoverse and Darksiders Genesis. Next year the following titles are already flagged for service inclusion; Doom: Eternal, WatchDogs: Legion, Gods & Monsters and Cyberpunk 2077. Keen gamers will observe that some of the titles included are months and even years old. There is just one exclusive in the form of indie title Gylt - a puzzle adventure.

To use the service from tomorrow, PC users might prefer to use their desktop Chrome browser. Those interested in playing the games from their sofa might choose a bundle of service + Chromecast Ultra + Controller that Google will be offering. Or you can buy the founder's pack of dongle and controller on their own and dip in and out of subscriptions as you wish. 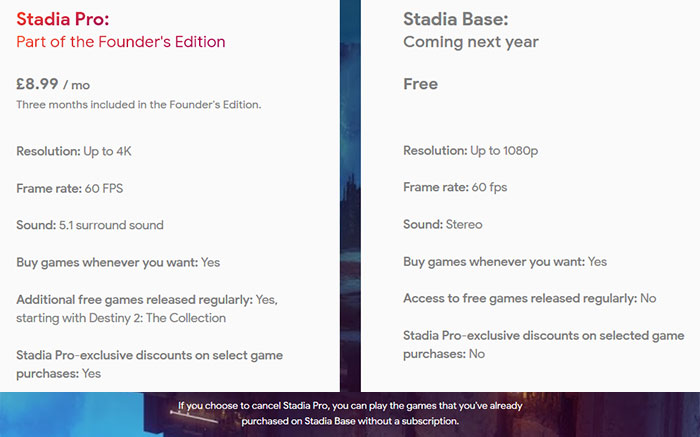 Initially some touted Stadia features - such as Family Sharing, 4K support for PC, Buddy Passes or achievements - will be absent from the offering.

So buyer beware that many of the launch titles are of the slower-paced variety and may be hiding some of the limitations of the tech.
Posted by Cypher0 - Mon 18 Nov 2019 12:27
Still not sure who Google is even aiming this at. Hardcore gamers will already have their PC/Console, plus have played the games already and aren't going to spend full price to buy them again. Casual gamers are going to look at the $70 pad + $10 a month then have to purchase all the games as a major cost issue. Either google need to make the service entirely free with you just purchasing what you want to play or pay single monthly fee to get access to a LARGE catalogue of games (a la Xbox GamePass).
Posted by Spud1 - Mon 18 Nov 2019 12:53
and…. nobody cares :)

Google just got this wrong - its expensive, beta testers have shown that the quality is highly variable (particularly with fast moving games) and they totally ignored the subscription/gaming as a service type approach that could have made them a fortune.

The intention is good, and someone is going to making game streaming work as a business model - but I don't think Stadia is the product to do it.

All of that said, very much like with Chromebooks/Chrome OS (which are damn near pointless products in a world where we have iOS, MacOS, Windows & Android) I think Google are playing the long game here. The money for Google isn't in providing the Stadia hwardware, or in margins on very over priced game licences…it's in providing the infrastructure and tooling for someone else to make it work in the future.

If they can sell the idea and the platform, and then you get say EA jumping into it and starting to resell on the subscription side of things (e.g. moving Origin Premier to support streaming)…they could make a fortune.

Dangerous move though, they really do risk alienating the gaming public through a poor quality service, just as OnLive did in the mid 2000s, and killing off the tech for another 5 years. I guess we'll see.
Posted by Skyflier - Mon 18 Nov 2019 13:19
This will be interesting to see how it goes. Although i think Google overestimate the quality of peoples internet connections and i think the hardware industry will have something to say in unlikey event it should take off.
Posted by Hoonigan - Mon 18 Nov 2019 13:27

You're wrong there. I care. I think this is really interesting and can't wait to see where it goes.