HEXUS reported upon the unveiling of the PlayStation Classic mini console last month. However this latest entrant to the retro mini console fray wasn't fully revealed and a particular query on many people's minds concerned what titles would be included in the full lineup of 20 games re-installed. Only five were revealed in the launch publicity; Final Fantasy VII, Jumping Flash, Ridge Racer Type 4, Tekken 3, and Wild Arms. 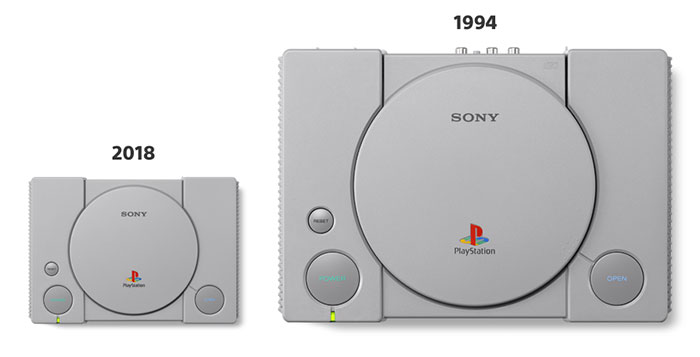 Below you will find the full alphabetical list of 20 games that will be pre-loaded, as shared today by the official US PlayStation Blog. I've put an asterisk next to the five pre-announced titles for your convenience. 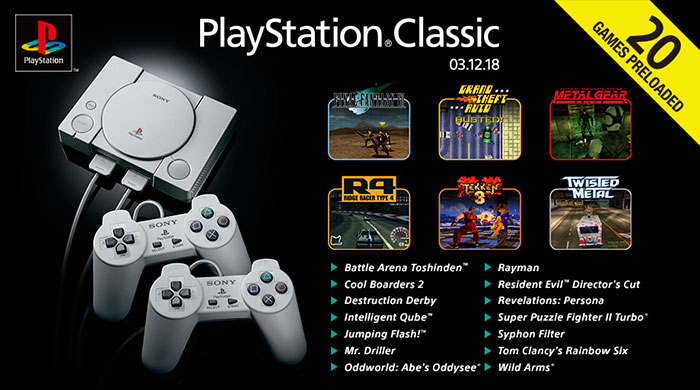 There are indeed some additional quality titles amongst the newly revealed full list. Metal Gear Solid has been long revered, and other highlights might be the original GTA, Resident Evil Director's Cut, and Super Puzzle Fighter II Turbo, depending upon your taste. For me, the earlier versions of Ridge Racer were my favourites and Wipe Out with the original soundtrack, plus Die Hard Trilogy would have made the console more interesting.

As a reminder, the PlayStation Classic will be released in plenty of time for Xmas, on 3rd Dec. Regional pricing is $99.99 USD / $129.99 CAN / €99.99 EUR / £89.99 GBP. It includes two original style wired controllers with USB connectors for local multiplay, an HDMI cable and a USB cable. We still don't know if extra games can be added somehow.

looks like these will be popular with those 20 games preloaded.
Posted by EvilCycle - Mon 29 Oct 2018 18:06
A good and solid mix of varied games to appeal to most there I think! The problem we have is that the ps1 was so damn good at its time, with sooooo many memorable classics, that a mini version with a select few games is never going to completely scratch the itch for everyone. This would need larger storage, tonnes of licensing and a higher price tag to cover everything the ps1 had to offer.

Great present for someone this for sure, because that's what it's all about really isn't it!
Posted by Tabbykatze - Mon 29 Oct 2018 19:41

Mapester
Quoting from the above article the asterisks mean “Only five were revealed in the launch publicity;”

looks like these will be popular with those 20 games preloaded.

That makes a lot of sense! (I has the dumb)

The big question as mentioned in the article is can more games be loaded onto it as time wears on or is this a static console with 20 games. It has a USB port in the back, maybe that's for a USB stick you can load with games as well as for saves.