Samsung launched the Galaxy Z Flip last night alongside its flagship Galaxy S20 smartphones. While it is likely that Samsung will sell and make much more money on the latter, it seems to be more heavily promoting the foldable. By at least one promo metric - the number of official videos - the Z Flip scores five, versus just two for the new Galaxy S family of mobiles. Anyway, we all know a lot about the Samsung Galaxy Z Flip already, but it is good to see all the official details, specs and pricing rolled out. 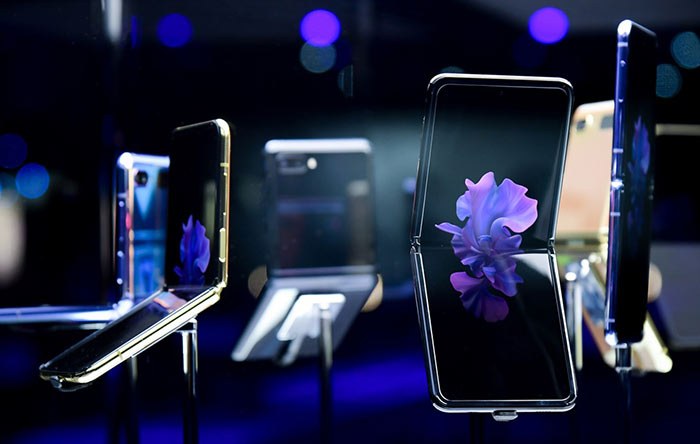 Samsung already released a foldable but in some ways it is talking up the Galaxy Z Flip as if the Galaxy Fold never happened. The proposition is strikingly different though; while the Fold transformed from smartphone to tablet, the Z Flip transforms from compact to phone. Its "stylish and compact form factor that fits in the palm of your hand," will appeal to many as the average slab smartphone nowadays is probably 6-inches or so. Furthermore, Samsung is now on its 3rd gen hinge and uses a whole new tech for the foldable screen.

The hinge mechanism and action is key to this mobile's success. Samsung has worked carefully on how the folding mechanism works - for example; it can be opened and closed with a single hand, it can stay open at multiple angles, inside it integrates Samsung's new sweeper technology to repel dirt and dust, and it uses a proprietary bendable Ultra Thin Glass (UTG) display. 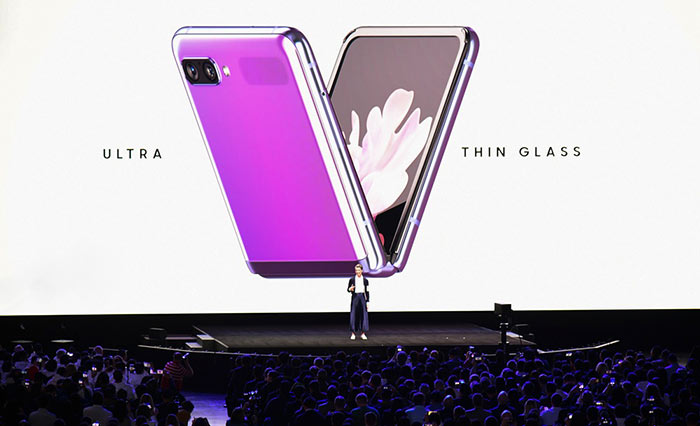 Inside Samsung has installed a 7nm 64-bit Octa-Core processor which runs at up to 2.95GHz (the UK version sports the Snapdragon 855+ SoC). There is 8GB RAM and 256GB of storage as standard. A battery of 3,300mAh is installed and is compatible with wired and wireless fast charging and Wireless PowerShare.

This device isn't 5G but offers LTE with up to 1.0Gbps download and up to 150Mbps upload. Other communications support is via Wi-Fi 802.11ac 2.4/5GHz, Bluetooth 5.0, USB-C, NFC, and there are location services via GPS, Galileo, Glonass, BeiDou. There is One eSIM and one Nano SIM, but no microSD. 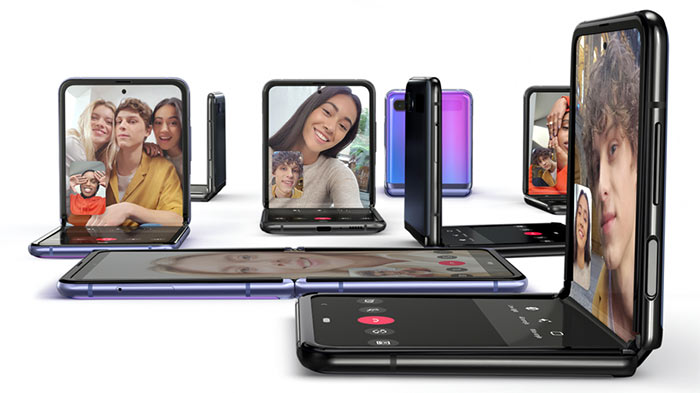 When you open the device you will likely use face recognition or the fingerprint sensor on the side to unlock - but pattern, PIN, and passwords are acceptable too. A mono speaker is installed with Surround sound for Bluetooth and earphones with Dolby Atmos technology.

Something significant Samsung Galaxy Z Flip users will notice is how the OS/software behaves as the device is flexed. This Android 10 device offers 'flex mode' thanks to close collaboration with Samsung and Google. When flexed but not fully open the device "automatically splits into two 4-inch screens so you can easily view images, contents or videos on the top half of the display, and control them on the bottom half," says Samsung.

Other screen niceties in any mode are multi-active windows support for multitasking, and the way the phone can support itself very stably at various angles for hands-free image capture and video recording. Meanwhile the dinky external AMOLED screen provides essential info like real-time notifications plus the date, time and battery status - at a glance.

Samsung says that the Galaxy Z Flip will become available in select markets including the U.S. and Korea on 14 February 2020 in Mirror Purple and Mirror Black, with a Mirror Gold option on its way. There is a Galaxy Z Flip Thom Browne Edition available from Valentine's Day too (see image of gift box directly above, right).

I've received emails from several UK mobile operators which are selling the device on contract or SIM free. Currys PC World and CPW told me they will be selling the new foldable for £1,299 with 12 months interest free credit. Alternatively, there will be contracts available from £79.99 upfront, at £75.00 per month, with unlimited data. You can trade in an older device for up to £350 too.