Samsung has announced four Galaxy S10 premium smartphones. Three of them, the Galaxy S10e, S10, and S10+ will be available from 8th March, and we have the prices for them. However, the largest 5G-packing variant, the Galaxy S10 5G has yet to be priced, and won't be available until this summer.

With these 10th anniversary devices there isn't any particular new quality that stands out - but together Samsung claims that they "raise the bar with more screen, cameras and choices". DJ Koh, President and CEO of IT & Mobile Communications Division, Samsung Electronics puts it another way - by saying the four new premium devices are "each built for a unique consumer in mind," and that they push ahead "with breakthrough display, camera, and performance innovations". 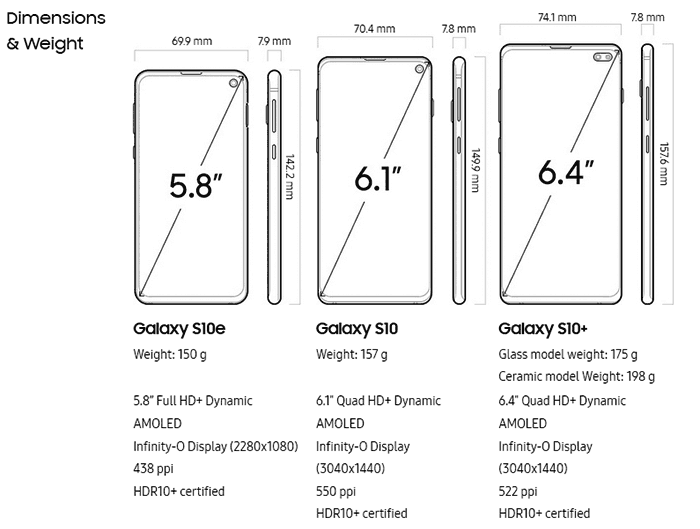 The new screens are said to be the best ever and are built using Dynamic AMOLED technology. Samsung claims that these screens are exceptionally accurate, even in bright sunlight, and can keep your eyes comfortable in lower light conditions via reduced blue light without compromising picture quality. You can see from the images that the three soon to be available devices come with Samsung's Infinity-O Displays, with an array of sensors and camera technology crammed into a hole cut-out in the top right of the screen. Behind these screens is an embedded Ultrasonic Fingerprint Scanner that reads the 3D contours of your physical thumbprint for improved security (except in the S10e, which uses a side-fingerprint scanner) .

Above you can see an overview of the Samsung Galaxy S10e, S10, and S10+ from left to right, with the screen sizes and other specs incrementing. If you don't like the edge screen, the new S10e might appeal but its cameras and other specs are somewhat reduced - but so is its pricing. 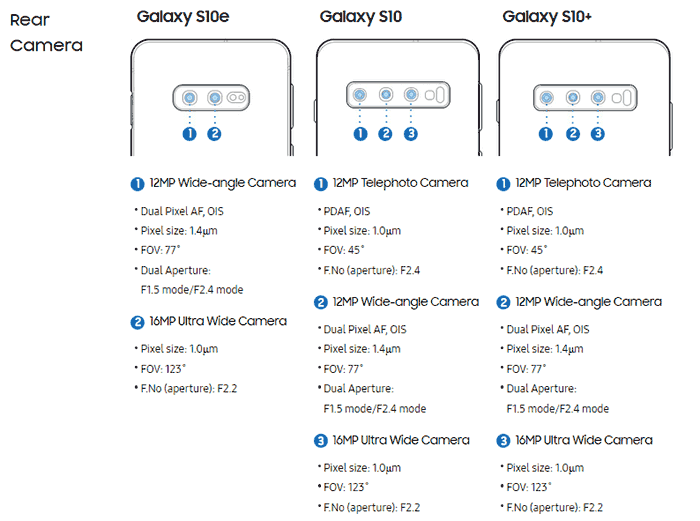 Camera functionality varies throughout the range but all are based upon Samsung's Dual Pixel and Dual Aperture tech. A new ultra-wide lens features in the rear camera array with a 123-degree FOV but depending upon model you will have 2, 3, or even 4 rear cameras. Meanwhile all the phones have OIS on the rear camera systems. Selfie cameras vary too, from a single 10MP Dual Pixel AF, F1.9 (80°) to the same camera combined with a 3D Depth: hQVGA camera. Whichever model you choose, Samsung has backed up its optics with smart features powered by a Neural Processing Unit (NPU) - giving rise to enhanced functions such as Scene Optimizer, and Shot Suggestion.

Samsung hasn't released a dedicated gaming smartphone so far, as it thinks its S series covers this functionality with aplomb. In the case of the new S10, it says that the "advanced hardware like the vapour chamber cooling system, AI-based performance improvements, and a GPU optimized to ensure smooth gameplay," will help you "crush your high score" and the Infinity-O Display and Dolby enhanced game mode come together for a great experience. 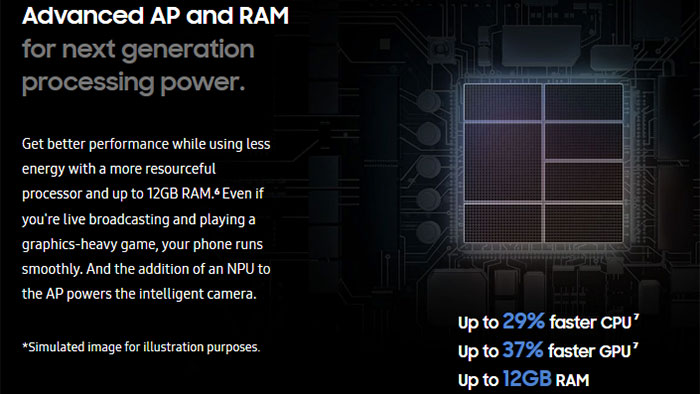 Other features of the new Galaxy S10 range worth mentioning are the up to 12GB of RAM, up to 1TB of storage (plus SD card up to 512GB), up to a 7nm 64-bit Octa-core processor, up to dual-hybrid SIM, fast charging and wireless powershare functions, plus Android 9.0 Pie comes pre-installed. Samsung services like Bixby, Samsung Health, Samsung Pay and Samsung DeX are all present.

Samsung will release the Galaxy S10e, S10, and S10+ from 8th March onwards in select markets with pricing from $750, $900, and $1000 respectively. Pre-orders are open now and I've had various emails from the PR departments at Carphone Warehouse and Sky Mobile about availability and pricing in the UK. There are plenty of colour options available, as you can see here, which vary depending upon model / region. In select markets, consumers who pre-order a Galaxy S10 or Galaxy S10+ will receive a pair of Galaxy Buds ($129.99 value) for free. As mentioned in the intro, we don't know about pricing and availability for the 6.7-inch Galaxy S10 5G as yet.

I'll stick with my S9 for another year until this hole in screen madness is over.
Posted by cruiser - Fri 22 Feb 2019 04:00
Expensive new phones with just a little upgrade from the previous model. I'll stick too with my current phone.