Samsung has sent out invites for its Galaxy S9 and S9 Plus launch event. The Samsung Galaxy Unpacked 2018 event will be held on 25th Feb, a day before the start of MWC 2018. For those who can’t be at the event it will be streamed live on Samsung.com. 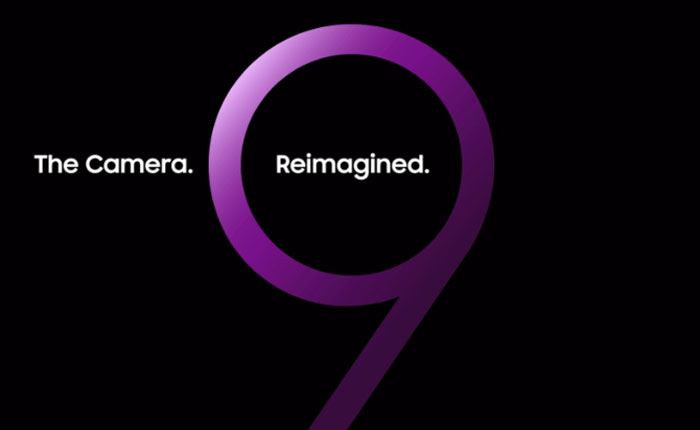 The official Samsung news site includes an animated version of the invite but little in the way of further information. However, the animation is definitely a teaser, and knowingly Samsung writes “a picture is worth a thousand words,” directly below it. In the short looped animation, we can see someone slowly and smoothly draw out the number 9. Some text appears over the finished character – “The camera, reimagined”. Within the accompanying blurb there is one further sign of intent, Samsung says that the new camera will “redefine the way you share your moments”.

In our most recent previous Galaxy S9 news article, the purported packaging for the upcoming Samsung flagship smartphone release was revealed. From this we could see the camera would be a standout feature of the new device. As a reminder, the back of the Galaxy S9’s product packaging contains the following spec:

A recent article on XDA reckons that the S9 and S9 Plus will utilise “some variant of the ISOCELL Dual”. This is a new sensor sketched out, alongside the ISOCELL Slim, ISOCELL Fast and ISOCELL Bright, on Samsung Semiconductor’s mobile imaging pages. As well as excellent photographic qualities the sensor is capable of ‘super slow-mo’ video capture. It is possible that the ISOCELL Dual, which can mix and match various sensors, could include the headline feature of the ISOCELL Fast which record 1080p video at 480fps. A version of the Samsung ISOCELL Dual features in the Galaxy Note 8.

Posted by CAT-THE-FIFTH - Thu 25 Jan 2018 11:06
All indications are this is a tweaked S8. So another sub £30 camera in a £600+ phone,which means other parts will cost more but the camera will be advertised the most despite its very low cost,and all the fans will defend it to the ends of the earth.

No wonder that in the real world the S8,iPhone 8 and iPhone X sales were less than expected and more and more people are keeping their phones longer.Another bean counter led by the numbers phone raiding the parts bin with more PR bumpf. Samsung has been accused by Italian regulators of actively gimping battery life so to force people to upgrade quicker, which is no wonder as research is indicating the lack of true innovation is dampening people's excitement on spending another £600+ on these phones. More people seem to upgrade if the phone goes kaput and more people are buying cheaper phones.
Posted by mers - Thu 25 Jan 2018 12:46
Can never understand peeps spending so much money on phones , can buy a whole computer for less than some of these damn things.
I have to have a phone for work and the camera comes in handy occasionally on jobs for reference. My phone is for phone calls and a few texts if really necessary , it's not a poser / bling must have.I have 3 cameras for proper photography , 2 computers and 2 laptops for work and internet. Tablets ? , well I have paracetomol.Lol. Another thing that bugs me is , I go into various computer sites / forums
and half the damn place is full of mobile phone articles , sorry , I'll hang up now.
Posted by 3dcandy - Thu 25 Jan 2018 12:57
2 answer you both…. because this is a hardware site most of the people here are not like the average Jo or Joanne. Most people I know who aren't hardware geeks buy a phone because that is all they will have. No cameras, no laptop - maybe a tablet. Almost certainly not a big box pc any more (or at least one they use). If they use a laptop or pc it's at work…and work only
This is why people will spend this much on a phone, and this is why people are not fussed about spending this much. And us hardware geeks, in general, are in a small minority these days
Posted by LeetyMcLeet - Fri 26 Jan 2018 08:56
And here's me still happy with my Nexus 5 :p
Posted by cptwhite_uk - Mon 29 Jan 2018 11:00
Nexus 5, best phone I've ever owned.