A clear packaging shot, claimed to be of the back of a Samsung Galaxy S9 box, has confirmed many of the device's key specs. In addition there are some more recent device photos and insights to Samsung's upcoming flagship Galaxy S9 to share since our last story a month ago. 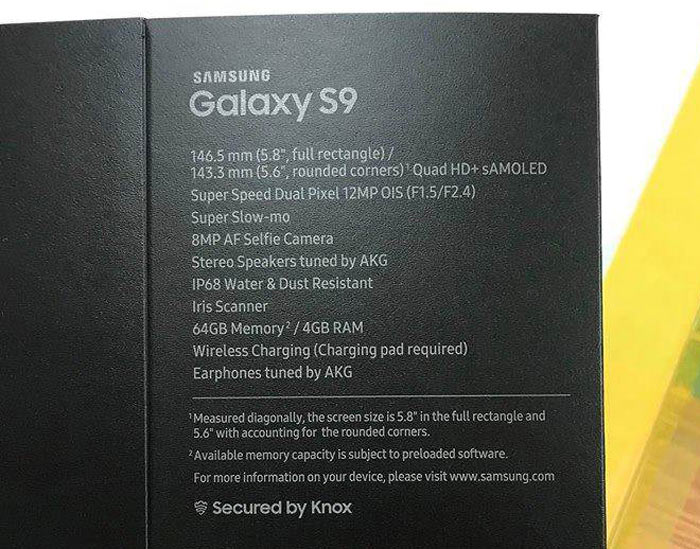 Above you can see the back of the Samsung Galaxy S9 packaging, as headlined. The specs begin with a breakdown of the device size rather than the screen size but it is confirmed that the 5.6-inch screen offers a Quad HD resolution (1440 x 2960 pixels, 18:9) and is of the Super AMOLED type.

Picking through the rest of the specs perhaps the most interesting things is the main camera. As explained by Digital Photography Review, the camera likely comes with the same stabilized variable aperture 12MP camera as the China-only W2018 flip-phone. In this case the camera "switches between F1.5 and F2.4 when it senses there's enough light around in an attempt to capture the background as much in focus as possible". An f/1.5 aperture is faster than any current smartphone and, with OIS too, will appeal to those who take many of their images in low-light.

Imaging improvements aren't limited to stills. Samsung has bumped up video fps recording speeds to enable 'super slow-mo' shooting. That's an interesting feature for creative video uses and there are even YouTube channels dedicated to this type of video.

In other specs we expect there to be versions of the Galaxy S9 powered by the Exynos 9 Series 9810 and by the Qualcomm Snapdragon 845. Base versions will come packing 4GB of RAM and 64GB of storage. It is expected that the Plus versions will come as standard with 6GB of RAM, and will differentiate further with a dual-lens rear camera system. 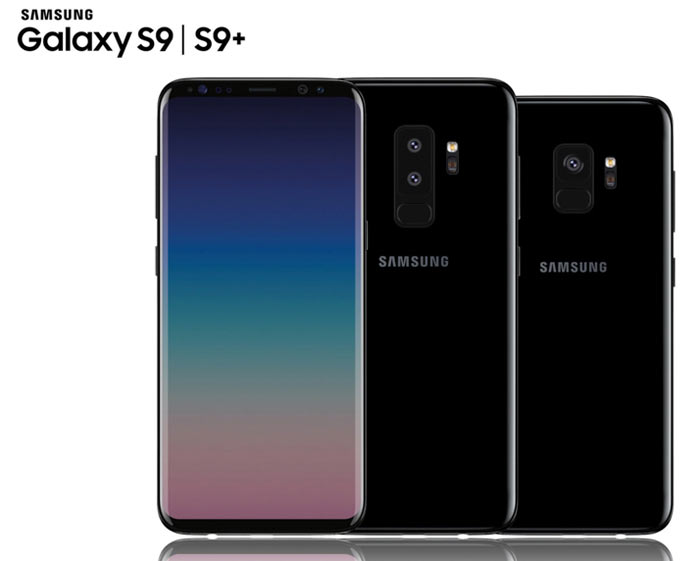 Last week Samsung Mobile boss DJ Koh confirmed that the Galaxy S9 will launch at Mobile World Congress in February. Device availability, and hopefully the pricing, will be revealed at that event. The Galaxy S9 (SM-G960U) and S9 Plus (SM-965U) have recently appeared on the FCC website.

Posted by Spud1 - Mon 15 Jan 2018 13:25
In one way it's a shame that the S9 is very much a boring iteration on the S8 - better speakers, better camera, slightly faster CPU and perhaps the most important thing..fixing the finger print scanner location.

In another, its great news for me :) Firstly it shows that Samsung have listened to those that critcised the S8. Stereo speakers and relocation of the finger print scanner are two very welcome improvements! The fact its a rather boring incremental update is also nice as it means i'll be happy waiting a generation before buying a new phone…if they had gone with their earlier bezeless (and notch-less!) design i'd have been more temtped to splash the cash…

Also gives their competitors time to come up with something better. I'm by no means wedded to Samsung phones but in my view they made the best phone of 2017 - anything could happen in the next 12 months.
Posted by Blaineoliver - Mon 15 Jan 2018 16:36
I wouldn't really say you can call an F1.5 aperture faster, granted by letting in more light you would be able to take a decent photo faster. But its giving the wrong impression of how apertures work.
Posted by 3dcandy - Mon 15 Jan 2018 18:02
It's faster in common talk though… a lower aperture lens is nearly always referred to as being faster than a higher aperture lens
Posted by peterb - Mon 15 Jan 2018 18:47

Blaineoliver
I wouldn't really say you can call an F1.5 aperture faster, granted by letting in more light you would be able to take a decent photo faster. But its giving the wrong impression of how apertures work.

A larger aperture (smaller f number) lets more light in, so in conventional photography you can use a faster shutter speed. Hence a lens with a large aperture is referred to as a fast lens. Nothing to do with processing speed! :)