Amazon and Newegg have separately shared lots of info and images of new Nvidia Android set top boxes. At last we get to see the widely expected update to the Nvidia Shield TV - but there are two of them, a compact regular model and a Pro version. The former appears to be an HDMI Stick device in a tubular form (similar in size to a bicycle handlebar grip, and the latter looks a lot like the Shield TV of old, as reviewed by HEXUS back in 2015. Unfortunately both the Amazon and Newegg listings have been taken down overnight - but not before a multitude of tech sites had copied the texts and images.

As mentioned briefly above, the new Nvidia Shield TV comes in the form of a compact tubular HDMI connected gadget. At its ends there are; an HDMI port and a microSD card reader on one end, with an Ethernet port on the other. It must be mentioned that there is no USB port of any kind present here, but on the positive side this device has the microSD slot that its Pro brother lacks. Other key tech specs, and a new remote design, are shared with the Pro model, bullet pointed below. 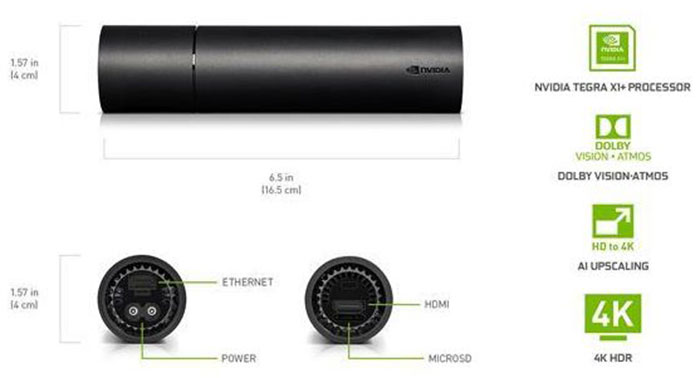 Nvidia's compact Shield TV was listed on Newegg Canada at a price equivalent to US$150.

The main new feature of these Android TV set top boxes is the upgrade to the processor. It is claimed to offer a 25 per cent performance improvement. Not much else has changed except for that and the upgrade to Bluetooth 5, and Dolby Vision HDR compatibility. So it will still be a capable 4K video streamer, Android gaming box, and Nvidia GeForce Now games streamer. Amazon listed this at US$200, with availability from 28th October. 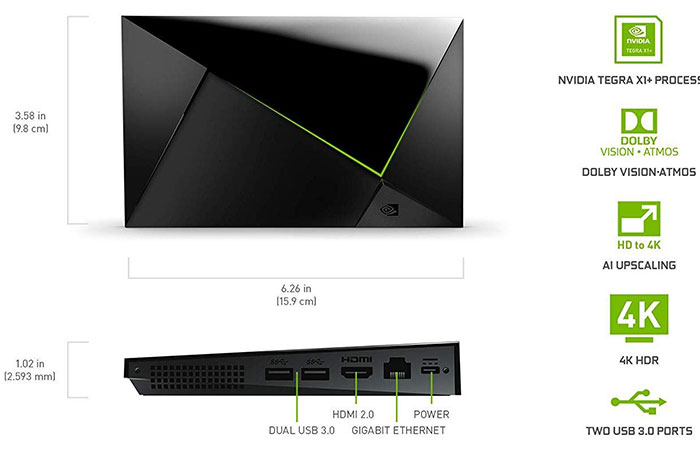 Both new Android TV STBs come with Nvidia's new remote (w/Bluetooth, IR, and voice). You can use the voice capability for Google Assistant and there is a new dedicated button for launching Netflix, as you can see. The remote uses standard 2x AA batteries (included), rather than coin cells. 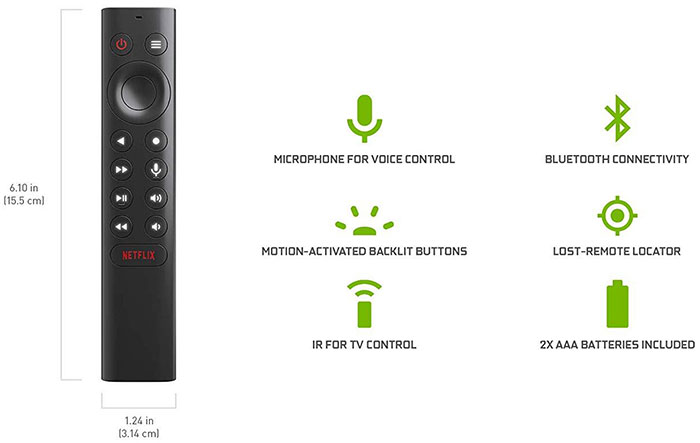 daddacool
£100/$100 saving on the Pro sees you gain a better remote (by the look of it) but lose 484GB of onboard storage. Not convinced.

Yes… one of the draws of the current Shield TV is the option of buying it with an internal HDD… really hope this is still the case, or that the unit has a user-accessible SATA or M.2 interface to offer some DIY storage upgrades (without hogging the USB sockets).
Posted by Millennium - Fri 18 Oct 2019 11:10
You need real world product shots with this kind of thing Hexus!
Posted by ValkyrieTsukiko - Fri 18 Oct 2019 11:18
sooooo, basically it's the shield equivalent of the nintendo switch tegra upgrade (lower fab)?
Posted by DanceswithUnix - Fri 18 Oct 2019 11:23
In terms of hardware specs that seems to be poor compared to a Raspberry Pi 4. I think the X1 is showing its age, even with a + on the end.