Facebook announced the Oculus Rift S PC VR headset back at GDC in March. At the time highlights were shown of this refined Oculus Rift successor, which will offer higher resolution screens, inside-out tracking and more. Now Facebook has published finalised product pages and opened pre-orders for the Oculus Rift S, with shipments expected to start from 21st May.

Naturally, the Oculus Rift S will allow users to tap into the full existing Oculus Rift library of games and experiences. Oculus says that with "improved optics and a higher resolution display, Rift has never looked so good". As well as improving the experience on offer the Rift S is said to be more comfortable, and includes Passthrough+, a true stereo-correct visual passthrough feature which will facilitate both HMD-on real world interaction and mixed reality experiences. 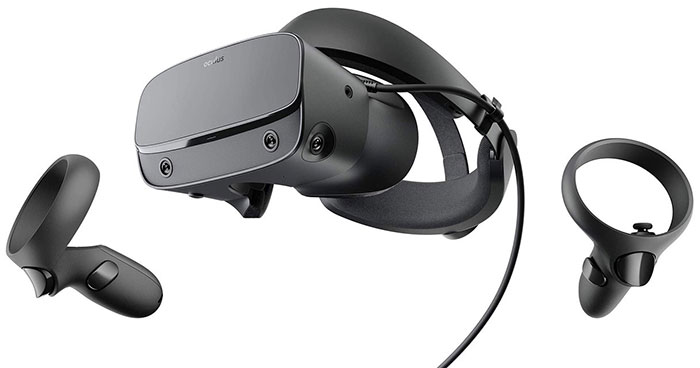 A recommended VR-ready PC will come packing an Intel i5-4590/AMD Ryzen 5 1500X or greater, an Nvidia GTX 1060/AMD Radeon RX 480 or greater, 8GB of RAM or more, DisplayPort 1.2 and USB 3.0 connectivity. You can get away with lower specs and Oculus has a testing tool available if you are in any doubt whether your PC makes the grade.

Unlike the Valve Index, in the news earlier today, the Oculus Rift S seems relatively affordable and it is available in a single £399 / $499 ready to go pack. For this flat fee you get the VR headset, a pair of Touch Controllers, 5-metre headset cable, and a Mini DisplayPort to DisplayPort Adapter. With its inside-out tracking you will be ready to go (without any base stations being required), as long as your PC is up to snuff.

The Oculus Quest is a wireless standalone HMD - it doesn't need tethering to an accompanying PC, or any cabling except to charge up from the provided adaptor. The processing power for VR experiences comes from a familiar mobile SoC, the Qualcomm Snapdragon 835 processor with Adreno 540 graphics. Alongside the processor there is 4GB of RAM and 64GB, or 128GB of storage.

As a VR HMD, the Oculus Quest comes with twin 1600 x 1440 pixel IPD adjustable screens which refresh at 72Hz maximum. Four cameras mounted on the HMD provide inside-out tracking and mixed reality possibilities. The controllers look to be the same as with the Rift S, offering six-degrees-of-freedom.

Facebook is launching the Oculus Quest with more than 50 games and apps certified for use with the system and while it seems to be a big step up from the Oculus Go, it is quite a bit more expensive and a purchase that is well beyond an impulse buy for most. Five preview titles come pre-loaded. The Oculus Quest costs £399 / $399 for the 64GB version and £499 / $499 for the 128GB version.

Posted by akingcool - Wed 01 May 2019 14:20
might finally plunge for some VR fun at these prices!
Posted by Darkedge - Thu 02 May 2019 12:31
Nice! I'd like a peek at the new HP WMR headset too saying that the Rift S seems excellent
Posted by Ttaskmaster - Thu 02 May 2019 17:28
VR gaming getting a little more affordable - Can only be a good thing, as lower prices mean more buyers, and the bigger audience should mean more thought into developing better control mechanics for the games.

Of course, the proof will be in the highly subjective user experience, so I'll have to try them all and see which is best… and then start worrying about if/when I'll ever be able to afford it!! :D
Posted by gordon861 - Fri 03 May 2019 12:16
The main thing stopping me from buying a headset at these prices is that it would render my HOTAS, wheel and keyboard useless, meaning what's the point of a PC for gaming?

These things need a facility to allow you to ‘see through’ the headset at the world around you. This could probably be facilitated fairly easily with a couple of cameras and an app that would allow you to define parts of the sphere you are sitting in transparent.

edit - it looks like there is some form of passthrough but it seems like it's all or nothing which doesn't really solve the problem.
Posted by Ttaskmaster - Fri 03 May 2019 12:27

gordon861
The main thing stopping me from buying a headset at these prices is that it would render my HOTAS, wheel and keyboard useless, meaning what's the point of a PC for gaming?

Most users become sufficiently familiar with their chosen HOTAS layout that they no longer need to look down at it… Same for WASD in KB&M controls.
Certainly I found VR no problem flying in Elite without needing to look down at the stick. I don't know of anyone who did have a problem, really.

However, for games that play standing/moving in full roomscale, the headsets do have a number of options that let you ‘see through’ and can also be set to trigger only when you get close to custom-defined boundaries. There's a pic-in-pic video image from an external camera, as well as a variety of wireframe overlays and imaging, including one that looks more like digital IR nightvision. It's weird seeing that, but still being able to recognise people's faces!