Intel has announced that it has hired Anton Kaplanyan as its new VP of Graphics Research. The name might not be familiar, but projects Kaplanyan has worked on will be well known to anyone with a passing interest in PCs, gaming, or even animated films.

Kaplanyan's tech career gained direction in the early 2000s when he coded a light path tracer which ran on a Celeron processor. By 2004 he moved into games development, ending up working with Crytek from 2009 to 2011 on 3D engine advancements including CryEngine 3. This work would inspire him to switch back to academia (KIT in Germany) and indulge in research to complete a PhD in physically based light transport simulation. The technology outlined in the doctorate was subsequently used in Pixar's RenderMan Engine, and into its well regarded animated films. 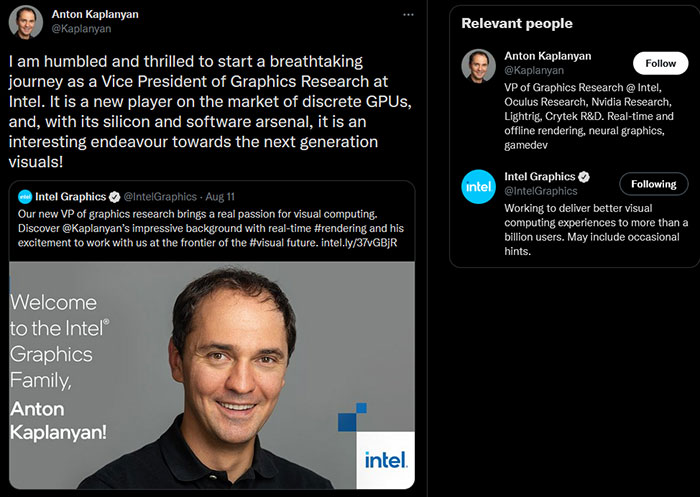 The next move for Kaplanyan, in the mid 2010s, was to Nvidia to work on the (back then) next-generation RTX hardware design for real-time ray tracing. He worked on RTX ray tracing hardware design and simulation, and applied ML to real-time graphics for technologies like DLSS. By June 2017 Kaplanyan's work and experimentation in VR lead him to take up a position with Oculus, now owned by Facebook. He helped establish a new research lab and evolve graphics for this new medium.

Now, Kaplanyan hopes to make an impact that will be felt by Intel and its customers. In the Intel news blog, he says that we are still at an exciting stage in the development of computer graphics, "at the edge of a new era". In the near future the new Intel VP predicts we will see "an era where visual computing will become more distributed, more heterogeneous, more power-efficient, more accessible, and more intelligent". Of course, Kaplanyan reckons Intel is perfectly, if not uniquely placed, to make good on this potential as it "has all the technology building blocks in compute architecture, memory, packaging, and interconnect for advanced hardware architectures."

The big takeaway from Kaplanyan's hiring by Intel, according to the man himself, is that Intel's upcoming advancements in CPUs and GPUs mean it is poised to become the "favourite choice" of both gamers and professional content creators. Let us hope that Intel can live up to the optimism of its newest VP.

CAT-THE-FIFTH
Intel might be more serious about the GPU market than we thought! :eek: