Earlier this month we read reports that LG was preparing a roll-up TV for 2019. Bloomberg sources indicated that the innovative minimal TV designs were on their way and they were backed up by prototype images, and a video, already shared by LG Display. The images showed a central rectangular base from which a TV screen would unroll vertically to provide a 65-inch diagonal OLED display. We hope to see it at the CES 2019 in Las Vegas next week.

LG and Samsung have often been seen to be neck-and-neck in the screen technology race and again that is the case here, it seems. LetsGoDigital has unearthed a recently published Samsung US patent (PDF file, published on Xmas Day), which describes a rollable display TV and shares images of this concept / prototype device. 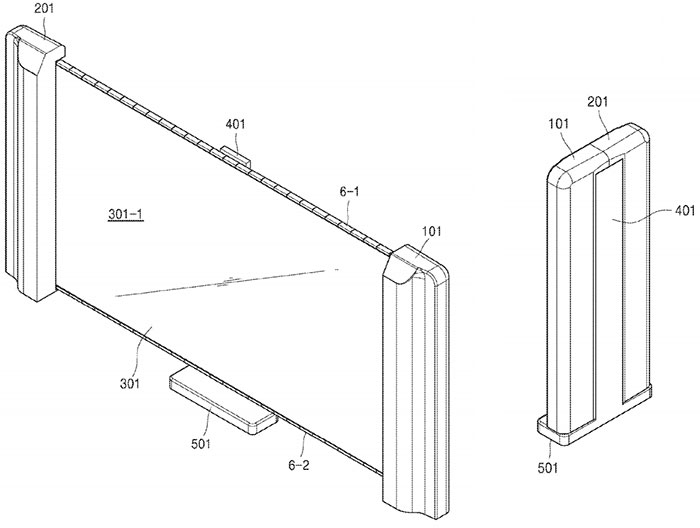 In Samsung's design you can see that the display rolls out left and right, from being stored in a central column. It should end up being equally minimal to LG's long rectangle with a horizontal orientation once it is all retracted. The chunky looking side sections could provide room for sizable speakers but the overall look once deployed isn't as minimal or futuristic as LG's design. I also envisage some wobble if the base isn't wide/weighted sufficiently.

One obvious advantage of the Samsung design is that it should have greater vertical rigidity thanks to the trio of columns that run in this orientation. That would help prevent any slight display curves that could lead to image distortion. Avoiding image distortion due to its support structure is one of the central background propositions in Samsung's explanation of its patent (page 43 of PDF). 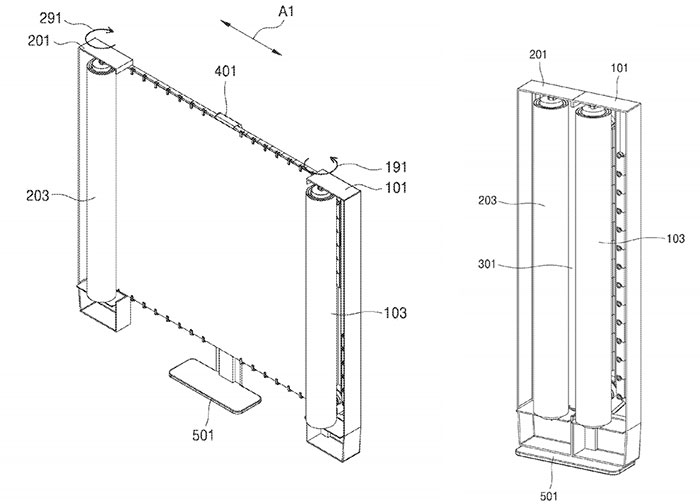 If you want to read more about how Samsung's roll-up screen technology works there are extensive diagrams within the previously linked PDF. With the patent only just published it looks like there is only an outside chance that Samsung will have related products available at the upcoming CES 2019.

Posted by skubi2808 - Mon 31 Dec 2018 16:07
Hi, in my opinion will be better from top to bottom whole tv should be installed on the celing like a projector screen will be nice just press the power on, on remote control and screen is open ;)
Regards,
ADAM
Posted by LSG501 - Mon 31 Dec 2018 19:52
Yeah don't see the ‘logic’ in doing a TV this way, it will still up just as much space as a normal tv. I can see it working on a hand held device though (we were knocking out concepts like this 20-30 years ago)….

A TV needs to unroll vertically like the LG one does so it can be mounted in the ceiling or take up a small amount of space on a sideboard and allow it to roll up in front of a picture on the wall or something.
Posted by Saracen999 - Mon 31 Dec 2018 21:03
I can see the appeal of a roll-away TV, though I agree with the other “ceiling down” comments. But …. does it compromise screen quality, or reliability/longevity, and what does it do to price?

If it can pass those tests, then it may well be the way TVs will all be in x-years time, but personally it isn't something that would make me go out and buy a new TV. When my existing set packs up, and I'm buying anyway, then subject to the above, it might be a determining factor

I do, generally, like the idea of a hidden TV that is there when you want it, and doesn't burden the room with a huge black lump of glass when I don't want it.

It could be a sign of things to come possibly even roll-out horizontally, which overcomes the need for mounting frames, running leads snd power, etc, in the ceiling. IF they csn overcome those reservations.
Posted by aidanjt - Wed 02 Jan 2019 12:35
'Wallpaper' TVs like LG's makes more sense to me than this. The market need for a roll-up TV is going to be very very limited.
Posted by Zatoichi - Wed 02 Jan 2019 22:14
item 401 and distance A1
Rolled up it works as a phone. Going to need a notional screen on it.
pulling it open and it snapping rigid, that's going to be the winner.