Ofcom has just published its latest 2020 survey comparing customer service and satisfaction levels across the home broadband, mobile, and landline telephone markets. This isn't just a popularity chart for each service, Ofcom has added some meaningful stats to help indicate why consumers may or may not have a good relationship with their telecoms provider and their opinions of its offerings. Things like complaint levels, fault levels, complaints handling, new service installation, and average call wait times to speak to a rep are considered too. 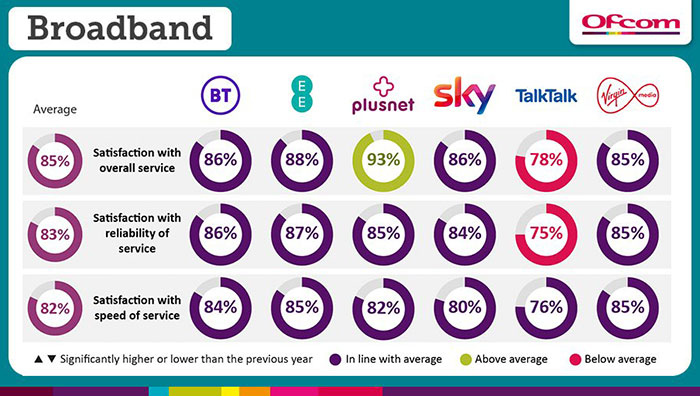 Ofcom found that Plusnet was the best rated ISP by consumers overall by quite some margin. However its reliability and speed satisfaction ratings weren't the best. Reading further into the report, the average call waiting time for Plusnet customers was rather bad too at 3mins 48s, second only to Virgin Media customers (4mins 26s) but much longer than the likes of BT (55s), EE (26s), Post Office (1min 12s), and the worst rated overall ISP TalkTalk (39s). 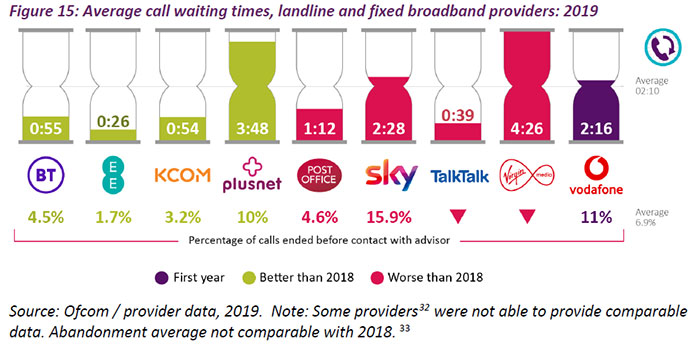 TalkTalk got the worst overall rating by quite some margin. A lot of its customers were unsatisfied with reliability and speeds but as noted above it was at least pretty quick to pick up a customer service call. Interestingly, it received 87 Ofcom complaints per 100k subscribers, which was better than first placed Plusnet (100). It looks like TalkTalk's weakness might be partly down to satisfaction with complaints handling, which was the lowest at 44 per cent (again, for comparison, Plusnet had 52 per cent complaints handling satisfaction). 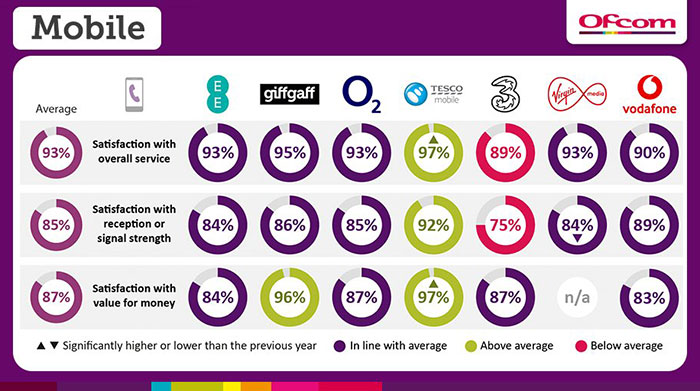 Overall satisfaction with mobile services looks high on average with Tesco Mobile doing extremely well at 97 per cent. The lowest rating was given to Three (89 per cent), and that seems to be impacted heavily by perceived reception issues (the lowest satisfaction level in this metric) but moderated by value for money. 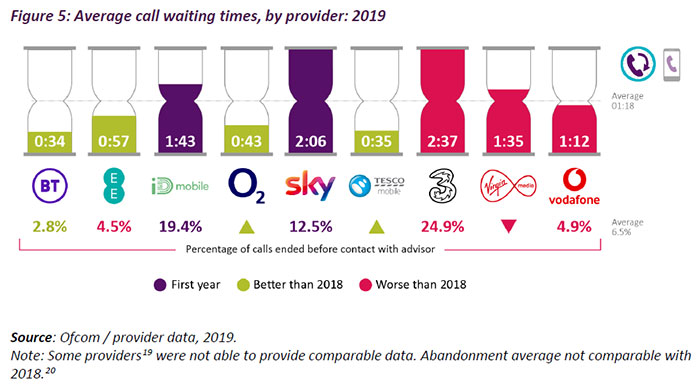 Interestingly, Ofcom notes that networks like Tesco Mobile are MVNOs (using O2, alongside GiffGaff, in this case) but the customer satisfaction with reception or signal strength will vary compared to the network they piggyback on. For example, both Tesco Mobile and GiffGaff had better perceived reception and signal strength than O2... Ofcom reckons differences in satisfaction with network performance compared to these networks may be due to a different geographic distribution of customers, or potentially a 'halo effect'. 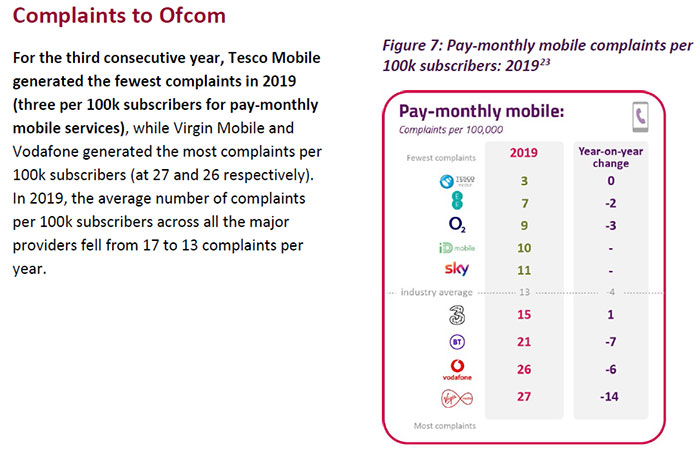 BT, Tesco Mobile, and O2 were the best at answering calls from customers, with outliers at the tedious end of things being Sky and Three. The average complaint levels observed for mobile networks were 3 per cent, with O2 at the good end (1 per cent) and Three causing consternation with 6 per cent of customers. However, the likes of Virgin Mobile, Vodafone and BT saw more complaints per 100k users to Ofcom than Three did. Virgin Mobile and Vodafone got further red marks for complaints handling performance.

I've not gone into the landline results above specifically, but they are readily available in the full PDF with a similar range of charts and service metrics looked at as per the ISPs and mobile providers. It would have been good to see some data on 'mobile broadband' service too.

Posted by ik9000 - Fri 21 Aug 2020 18:01
Could this be skewed by users using Tesco and plusnet will presumably have lower expectations/less onerous use cases so won't report being disatisfied/notice problems in the same way. By contrast users with high demand will go for better spec offerings like fast cable etc, notice when things aren't 100%, and be more vocal about difficulties they encounter with them?
Posted by kalniel - Fri 21 Aug 2020 18:14
Partly, but it's also nice that when you do have to talk to someone (plusnet in my case in the past) you tend to get through to someone who is really helpful from the off rather than having a reduced call pick up time but then having to jump through hoops and tiers of support to maybe get help or not. I've also liked the reduced amount of having to fight against annual/end of offer period big price increases.
Posted by rave_alan - Sat 22 Aug 2020 14:46
I wonder if this report affects companies prices..