Valve continues to enjoy great success with its Steam games platform, even in the face of the strongest competition it has had for years, if not ever. According to SteamDB, the platform has just broken a two-year record for concurrent users - 18,801,944 on Sunday 2nd Feb 2020. The previous record was 18,537,490 - from 14th January 2018. 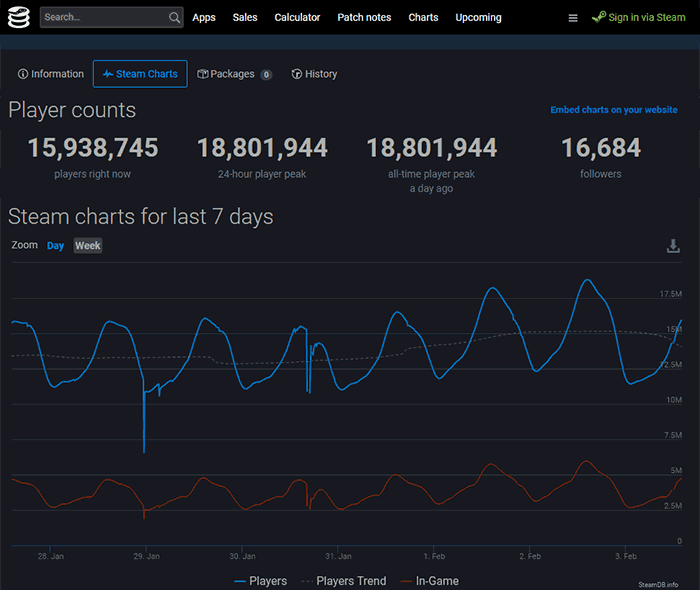 While the headline figure is up, interestingly there were fewer players actually active in-game during the record breaking period - about 5.8m vs about 7m two years ago. This metric is thought to be out of kilter as "a ton of those accounts are bots," explained @SteamDB in a follow-up Tweet. Meanwhile other concurrent users might be simply doing something else while Steam is running with a game open in the background.

As we edge into Feb, the Steam Hardware & Software Survey for January has been published. Often we look at this for significant trend changes in CPU and GPU markets. This time around there are, of course, some changes in these metrics - but nothing to alarm or delight any faction.

The biggest newsworthy observations is with regard to the OS versions in use by Steam gamers. It isn't surprising to see in some ways - as Windows 7 just hit the hardest of deadlines - End of Support. On the other hand, huge herds display powerful inertia, so a change of minus 7.58 per cent in Windows 7 users in favour of Windows 10 to the exact same but positive percentage is significant.

Moving into Feb, one might expect the remaining 14.24 per cent of Steam users using Windows 7 to fall strongly, before levelling off to represent the hard-core Windows 7 diehard gaming folk.

Other slightly notable things are that it is good to see octa-core CPUs comfortably pass the 5 per cent of user threshold, up nearly a full percentage point last month. The GTX 1660 is quite rapidly losing ground as the most popular GPU but with nothing in particular looking like a good contender to replace it right now. Last but not least the red wedge of Valve Index HMD users is looking encouraging for Valve, as long as it can step up supplies - it seems people are really keen to play Half-Life: Alyx using this premium PC-tethered VR solution.

Gentle Viking;4172729
well i am willing to bet, that all those gamers or most of them at least, are only there as they are forced to.

What?
Posted by Gentle Viking - Mon 03 Feb 2020 20:02
Well i have steam, cuz the one game i have required that to play though it are not even multiplayer.
If i could have installed the game and played it without steam ( and gotten my updates to the game the hard way by looking at the game makers home page )
Well then i would have chosen that as steam are just another thing i don't really need, and i cant see why games need it either as they worked just fine before steam.

I see steam as just another link in the chain, of people wanting to milk & mine you for all you are worth.
Posted by Hoonigan - Mon 03 Feb 2020 20:06
That doesn't mean that all, or most, of the people using Steam wouldn't if they had a choice.
I'd be willing to bet against you on that one.