Apple is in the late stages of preparing a new video streaming service for its device owners. The way that the service is described in a recent report shared by CNBC, makes the streaming service sound similar to Amazon Prime Video. However, Apple will have some free content available to its device owners (at least initially), as well as paid-for bolt-on channels in the app. With the new platform, Apple says that the video watching app will be unified for consumer convenience - and Apple will take quite a large cut of the fee anyone pays for an over-the-top video service - kerching…

A multitude of Hollywood stars have been invited to a glitzy launch for Apple's new video streaming service, reports Bloomberg. At an event on 25th March the iPhone maker will host an event to unveil both video streaming and news subscription services. It is claimed that "has created dozens of original programs so far," and will buy in other TV shows and movies. Initially the content will be free, with paid plans being structured for the summer, reckons Bloomberg.

How it works will likely be something like this: new content will be integrated into the Apple TV app, here you will be able to subscribe to Apple's original and bought streaming content and bolt-on channels like Starz, Hulu, and CBS/Showtime. At the moment Apple takes a 15 percent cut on revenue from customers that sign up to HBO Now, Netflix, and other streaming apps through the App Store, but it will be seeking a 30 per cent cut for space within its TV app, according to CNBC sources. 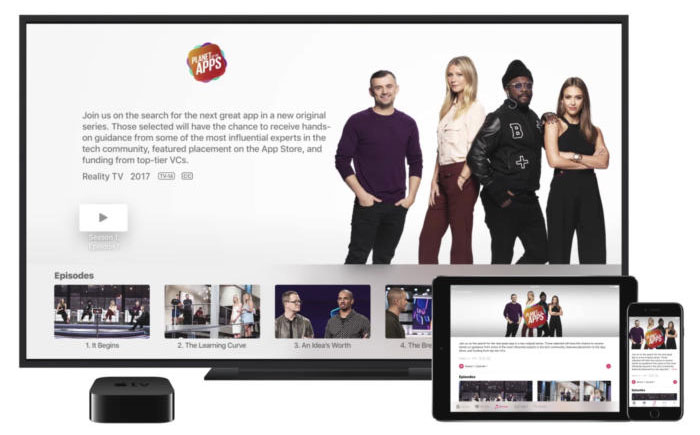 At the time of writing, the popular Netflix TV and movies streaming service seems to be resisting the lure of the Apple TV app, and there are signs that HBO isn't going to be ready for launch either. CNBC sources indicate that Apple has offered different terms to HBO than Amazon did for its inclusion in the channels list.

Only time will tell if Apple makes a winner out of this initiative. It is thought that Apple has already spent $1bn on content in the past year (however, that's quite small compared to the $8bn Netflix shows and movies budget), so it will be hoping to make a splash and significant market grab in 2019.

Although it's a pain, I'll probably stlll subscribe though. Apple, Netflix and Amazon together are cheaper than Sky, AND I never have to see another ad again ever….. subject to decent content of course. Netflix alone is pumping out at least enough to keep me entertained for the immediate future.
Posted by rabidmunkee - Fri 15 Feb 2019 16:35
I think this is the earliest april fools i've seen so far.
Posted by AGTDenton - Sun 17 Feb 2019 12:03
Bing Streaming for next year then?
Are Apple going to restrict this to the App store? Or something to add for iTunes later?
Posted by sinhaomar - Mon 18 Feb 2019 11:46
Not sure everybody will be happy to see Apple on this market.
Posted by Spud1 - Mon 18 Feb 2019 19:01

Although it's a pain, I'll probably stlll subscribe though. Apple, Netflix and Amazon together are cheaper than Sky, AND I never have to see another ad again ever….. subject to decent content of course. Netflix alone is pumping out at least enough to keep me entertained for the immediate future.

Are they really though? Sky's streaming only service (Now TV) is £17.98 for the entertainment & cinema pass, which seems cheaper to me. Its not difficult to get it for less too albeit on a time limited basis (e.g. for 3, 6, 12 months etc). Netflix starts at £7.99, Amazon is £7.99 too, and you can get that Apple's will be in that ballpark…probably higher but lets assume the same for a fair comparison. Thats all sticking with 1080p content of course, Netflix costs more for 4k (unknown with Apple yet!) but then NowTV doesn't offer 4k yet I don't think, so doesn't really matter.

Comparing it to “full fat” Sky TV isn't really a fair comparison, but even then a bit of haggling will bring that price right down to similar levels, unless you are after the premium boxes/services like Sky Q. You also need to buy some expensive hardware if you want this Apple service.