Earlier this month the story broke that AMD was in advanced talks to buy Xilinx. San-Jose headquartered Xilinx was the inventor of FPGAs and its products and tech are used in a diverse range of industries. Its particular strengths are in serving automotive, 5G, medical, aerospace and defence business - as well as creating data centre tech for accelerated machine learning, video, data analytics and genomics processing.

Today AMD has officially announced that it will acquire Xilinx, "creating the industry's high performance computing leader". Both are NASDAQ listed companies. The announcement contains some financial details of the deal. In brief, AMD is buying out Xilinx in an all-stock transaction valued at $35 billion.

AMD stock is rather buoyant and has climbed nicely in value over the last year - it is 2.4x the price it was at 12 months ago. AMD shares are sitting at $82.23 at the time of writing and there have been no significant price moves afterhours, since this news broke, suggesting investors had either priced it in, or think the buyout is a reasonable move which will have little impact over the short term. 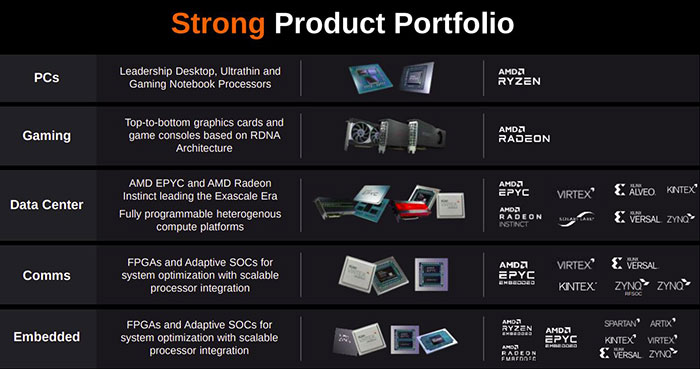 In its press release AMD outlines its reasons for its biggest acquisition ever. "The combination will create the industry’s leading high performance computing company, significantly expanding the breadth of AMD's product portfolio and customer set across diverse growth markets where Xilinx is an established leader," writes AMD. "The transaction is expected to be immediately accretive to AMD margins, EPS and free cash flow generation and deliver industry-leading growth."

With the acquisition done and dusted the two industry leaders will have a strong portfolio featuring high performance CPU and GPU technologies plus FPGAs, Adaptive SoCs and all the associated software expertise for crafting computing platforms for cloud, edge, and end devices.

AMD has worked extensively with Xilinx on sizable and complex projects over the years, and with this deep knowledge of the company AMD CEO Dr Lisa Su was "thrilled to welcome them to the AMD family". Xilinx president and CEO, Victor Peng, echoed Su's comments, highlighting the "shared cultures of innovation, excellence and collaboration".

AMD expects to see operational efficiencies, thanks to synergies, of approximately $300 million within 18 months of closing the transaction. The AMD and Xilinx boards of directors have unanimously approved the deal. However, the acquisition is still subject to approval by AMD and Xilinx shareholders, certain regulatory approvals, and other customary closing conditions. It is expected that the transaction will complete before 2021 is out.

Tabbykatze
Wow, almost as much as Nvidias ARM acquisition.

Although, which one will benefit the other more?

Both good but in different ways, either way AMD is now back at the big table again
Posted by mtyson - Tue 27 Oct 2020 13:02
Story updated with the investor presentation slides just out
Posted by QuorTek - Tue 27 Oct 2020 16:30
AMD is a big guy out there, with huge experience in all fields, it is amazing the comeback it had against Intel, and now chewing on Nvidia as well.

To me it does not matter who has the best of the best though or which brand I support or not, to me the competetion matters, for better prices and I would prefer most of all to roll a 1d2 to if getting whatever brand hardware, however.

Currently CPU wise, AMD will be an all time winner due to if buying a mobo, it would last 3-4 generations of CPU's, that is a bit thing on my end that make me sway away from chosing Intel again, the price you pay for a new socket all the time.