AMD is closing in on a deal to acquire FPGA specialist Xilinx. According to the Wall Street Journal, which was tipped off by people familiar with the matter, the deal could be worth >$30bn. Moreover, the deal is in advanced stages and it is possible it will be officially announced as early as next week.

HEXUS readers are more than familiar with AMD. However, some might not know that it has been a rousing success on the stock market this past year, with its shares up nearly 90 per cent and its value topping $100bn. This makes acquisitions using its stock as currency particularly attractive for AMD. Xilinx's year has been more sedate with shares up a modest 9 per cent over the last year, a bit better than the S&P 500 average. San Jose based Xilinx has a market cap of approx $26bn. A typical takeover premium would mean a potential buyer would be successful with an offer of approx $30bn or so.

As mentioned in the intro, Xilinx is an FPGA specialist, creating these reprogrammable processors for many customers but with a particular synergy with 5G telecommunications businesses at this time. Xilinx isn't in the HEXUS headlines very often but is often mentioned in semiconductor industry articles. The last time it headlined on the site was two years ago when its close collaboration with AMD created a system, combining AMD Epyc CPUs and Xilinx FPGAs, that achieved a new world record for AI inference (represented by image below). A year before we covered the news of the launch of the BrainChip neuromorphic accelerator PCIe card, which was based upon a Xilinx Kintex Ultrascale field-programmable gate array (FPGA) with six BrainChip Accelerator cores. 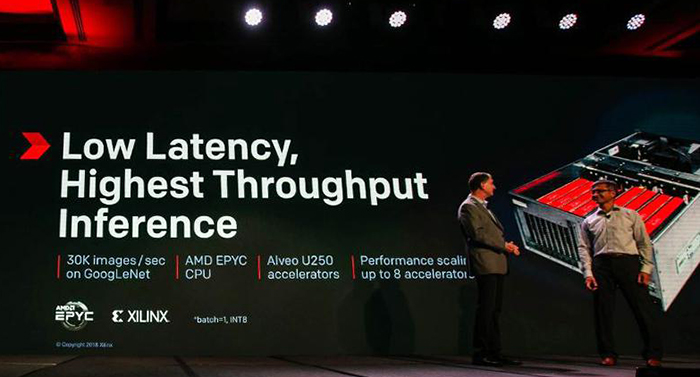 On the topic of synergies between AMD and Xilinx, Kevin Krewell, Principal Analyst, Tirias Research summed up that "AMD gets deeper entry into telecom, automotive, broadcast, and a much improved AI offering. Xilinx gets a data center partner. Not much overlap." Those interested in probing deeper into Xilinx and its background should take a look at its informative website with product showcases, blogs, and so on.

Intel got a strong foothold in the FPGA market back in 2015 when it acquired Altera Corp in a $16.7bn deal. At the time Intel's purchase was seen as a way to strengthen its position in server systems, data centres and the emerging market of the Internet of Things (IoT). Now Intel has quite a wide range of offerings in the FPGA market under its Agilex, Stratix, Arria, Cyclone, and Max subbrands.

Posted by DanceswithUnix - Fri 09 Oct 2020 11:08
Interesting deal. On the surface it doesn't make much sense beyond diversifying AMDs product line to give them better income predictability, but perhaps they have some Global Foundry wafer allocation they can pass over to FPGA use.
Posted by Zhaoman - Fri 09 Oct 2020 11:26
I remember the last time they had a successful lead over Intel and decided to acquire ATi with their flush cash… They got too complacent, lost direction, almost went bankrupt with debt and ended up in the doldrums for 10 years before they could have another competitive product…
Posted by Terbinator - Fri 09 Oct 2020 11:34
TBF the idea behind ATI acquisition wasn't the problem, was it?

More the execution to absorb them in a proper way that didn't bleed them dry? Obviously Intel also got their stuff together for Core too and wiped them out in the consumer space top to bottom.
Posted by Zhaoman - Fri 09 Oct 2020 11:47

Terbinator
TBF the idea behind ATI acquisition wasn't the problem, was it?

More the execution to absorb them in a proper way that didn't bleed them dry? Obviously Intel also got their stuff together for Core too and wiped them out in the consumer space top to bottom.

Yeah you can see the good idea behind it. Also tbf I was a teenager at the time and knew nothing about it other than it was apparent pretty soon after that they are cocking it up!
Posted by LSG501 - Fri 09 Oct 2020 11:48
Actually this ‘kind of’ makes sense to me as an acquisition.

When you consider that ‘everyone’ seems to be jumping on the AI bandwagon it would make sense for AMD to have their own AI too. They've already worked with Xilinx so they know they can work together well.

Just think if AMD were to start adding custom accelerators into their gpu/cpu's for certain tasks, similar to how they're adding custom bits to ARM cpu's these days to speed up key areas.

As long as AMD can keep driver support as a high priority that could really serve them well in servers and even on workstations, especially if they could come up with a real competitor to cuda.