Nvidia has released its latest set of quarterly financials. Its Second Quarter Fiscal 2020 covers the quarterly calendar period ending 28th July 2019. Looking at the headline figures, the green team raised $2.58 billion in revenue (earnings of $1.24 per share), compared to $2.22 billion in the previous quarter. However, a year ago it earned $3.12 during the same period - spurred by the massive demand for GPUs to mine cryptocurrencies.

The results beat analyst expectations. Wall Street was looking for 1.14 per share on revenue of $2.54 billion. Nvidia CEO Jensen Huang was very pleased with the results, which showed sequential growth in all Nvidia's businesses. PC gaming graphics remains the biggest earner for Nvidia - gaming generated 50.3 per cent of total revenue, and GPUs 81 per cent of revenues.

In a statement accompanying the results the CEO claimed that real-time ray tracing hardware adoption was about to take off. "Real-time ray tracing is the most important graphics innovation in a decade. Adoption has reached a tipping point, with Nvidia RTX leading the way," Huang told investors. 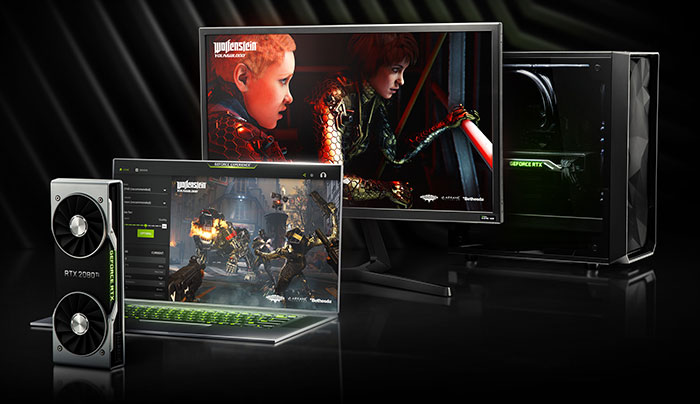 Laptops were instrumental in Nvidia's good fortune in the latest quarter. It announced 25 more Turing GPU packing gaming laptops and 27 premium laptops as part of the RTX Studio line, powered by GeForce RTX and Quadro RTX GPUs. Desktop gaming GPUs were actually down in the most recent quarter - but figures were offset by growth in gaming laptops.

Another business that the Nvidia CEO was pleased to highlight was its work with AI. Interestingly, AI tech spans several of Nvidia's business segments; Data Centre, Automotive, and to a lesser extent - Gaming. "Nvidia accelerated computing momentum continues to build as the industry races to enable the next frontier in artificial intelligence, conversational AI, as well as autonomous systems like self-driving vehicles and delivery robots," said the CEO. Automotive was a particularly perky segment, up 30 per cent from a year earlier and up 26 per cent sequentially. It is easy to see that AI in vehicles still has plenty of growth potential.

For its third quarter Nvidia is expecting revenue of $2.90 billion, plus or minus 2 per cent.

cptwhite_uk
Lol, no. How many games are using RTX again?

I think I can still count them on one hand, a year later.
Posted by Tabbykatze - Fri 16 Aug 2019 11:54
Almost certainly is not because of Real Time Ray Tracing but is because of their excellent highly paid marketing teams.
Posted by KultiVator - Fri 16 Aug 2019 12:00
This generation of cards has been disappointing from an enthusiast's point of view - still hoping that the upcoming higher spec AMD Navi cards (those that will sit above the 5700XT) will shake up the high end of the GPU market in the not too distant future.

A Navi-based card capable of running most games in the 4k 60hz ballpark and undercutting the stupid RTX 2080ti pricing by some margin is what the market is crying out for.
Posted by Ttaskmaster - Fri 16 Aug 2019 14:18

Hoonigan
I think I can still count them on one hand, a year later.

Having subbed to the Nvidia YT channel at some point, for some reason, my inbox is forever telling me about new videos with this game or that game now in RTX.
There's been a good dozen or so in just the last couple of months.