PC enthusiasts are eagerly anticipating AMD's 3rd gen Ryzen processors becoming available, alongside a tasty crop of PCIe 4.0 equipped X570 motherboards. We know that these new processors and motherboards are just over a fortnight away from becoming commercially available (on 7/7).

With the official and leaked performance indications we have seen thus far, Intel is understandably nervous about the possible impact that will be felt by its own consumer CPUs targeting the same user-base. Now, indications have started to be seen that Intel will adjust its pricing in an attempt to reduce the threat to its last and current gen processor sales.

According to a report published by DigiTimes today, Intel will "slash desktop processor prices by up to 15 per cent" in response to the competition. Sources in the Taiwanese motherboard market indicated that the pricing structure applied to Intel's 8th and 9th Gen processor will be adjusted down by between 10 and 15 per cent. Thus Intel processor prices could drop by as much as $75 at the higher end.

Looking at the Intel / AMD competitive history since the first Ryzen processors arrived this is the first time it has reacted in this manner - adjusting pricing of existing processor ranges. Previously you might see a reaction as it introduced a newer generation of processors at keener pricing. 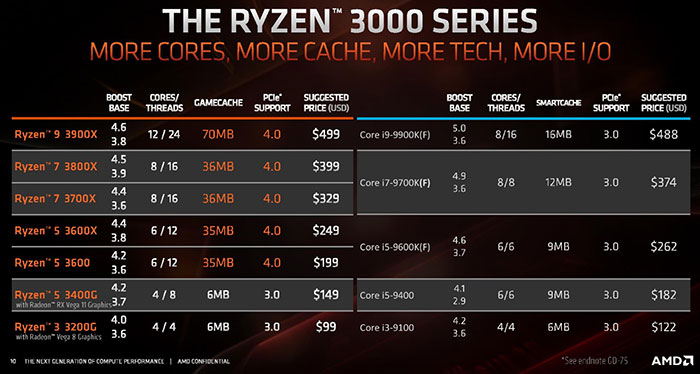 At a recent Investor Day, Intel announced that it was lowering its gross margins below 60 per cent due to 'competitive pressure' and costs involved in getting its 10nm and 7nm processes online. Thus there were signs of this price war, even before it started.

Tabbykatze
Unless the supply constraints are fixed, will this even matter?

Intel claimed that they were fixed. Did they lie to us? Say it isn't so! :)