July 7, 2019 will see five Zen 2-based CPUs go on sale, plus a couple of G-series chips based on Zen+ technology. There is another chip, the Ryzen 9 3950X, sporting a full complement of 16 cores and 32 threads, discussed here, which will be available in September. On this page, we go with the July 7 processors. 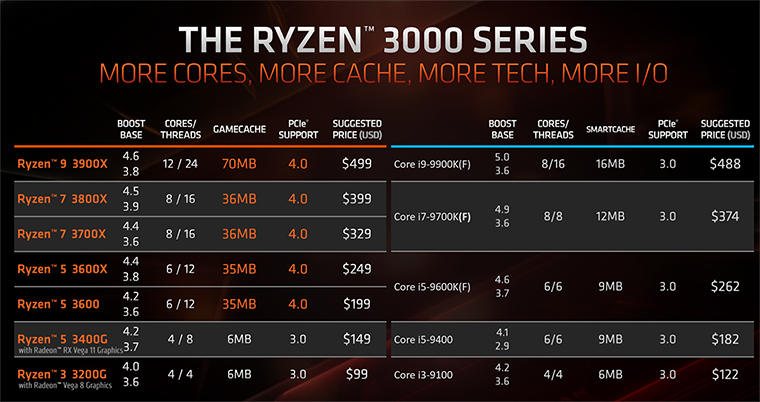 This at-a-glance picture shows how the new Ryzens line-up, currently, against their price-comparable competition from Intel. Of course, Intel may well change its pricing stack in the wake of AMD's new threat, but there isn't going to be any new desktop architecture for some time; this is what the blue team has in 2019. Intel's next-generation desktop architecture, based on the Sunny Cove architecture, is likely to see the light of day next year.

A few things to note. As described on the previous page, AMD amalgamates the L2+L3 cache and calls it GameCache. The 1MB difference between, say, the Ryzen 7 and Ryzen 5 CPUs is down to the latter having two fewer cores and consequently loses 2x512KB of L2 cache. Compared to Intel, and to mitigate any undue latency from the chiplet design, AMD invests in cache way more than Intel.

These new Ryzens also increase the officially supported memory clock to DDR4-3200. AMD says that the new controllers go much faster than previous generations, routinely hitting well over 4,000MHz, and given that the memory controller is located in the I/O chiplet, this speed ought to be available on older chipsets, too.

Interestingly, AMD has worked with Microsoft and is rolling in a bunch of performance enhancements for the May 2019 Windows Update. Specific to Ryzen, these enable better thread scheduling on CCDs for enhanced performance. More on this when we test. For now, here is how AMD reckons its latest chips line up.

First off, all of the following numbers are provided by AMD. The improvements in the IPC, higher memory speed, and having oodles of cache, the company says, makes the 12C24T Ryzen 9 3900X about as fast as Intel's mainstream champ in gaming. That's a bold claim because Intel has historically held a solid lead in 1080p throughput, availed by its better IPC metric. If true, and we'll judge it ourselves at the nearest opportunity, Zen 2 ought to offer a near-identical gaming experience. 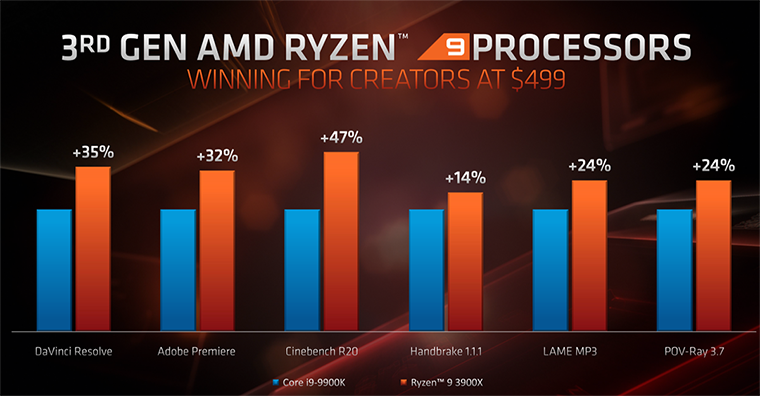 Having more cores and threads at your disposal, for the same price, gives the 3900X a solid lead in multi-threaded benchmarks. AMD reckons its chip, rated at 105W, also uses about 15 per cent less overall system power when adjudged at the wall. That's impressive. 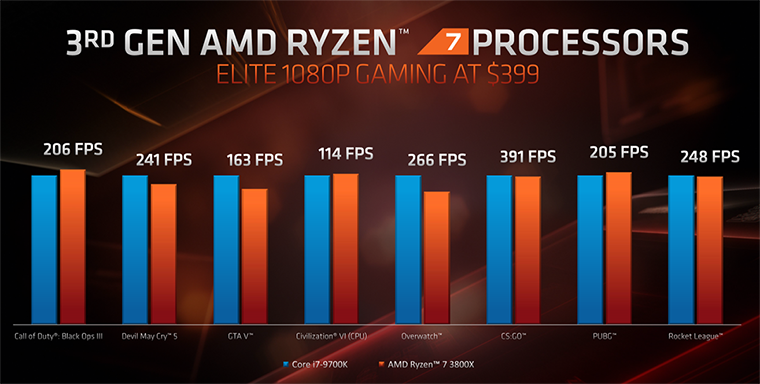 In similar fashion, AMD believes the 3800X is also about the same speed as the price-comparable Core i7-9700K in gaming, though it has double the number of threads as its competitor. 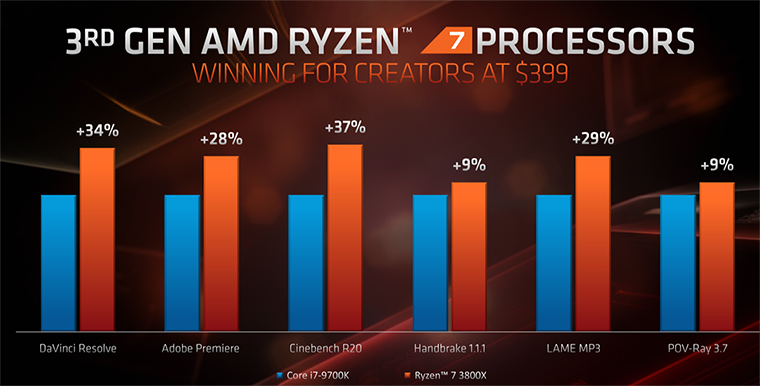 The multi-threaded story, as you would imagine, is quite different, though we did expect the gap to be wider given that, as we have said, AMD's chip has twice the number of threads. Considering its greater thread footprint, AMD concedes that its chip does draw a little extra power. 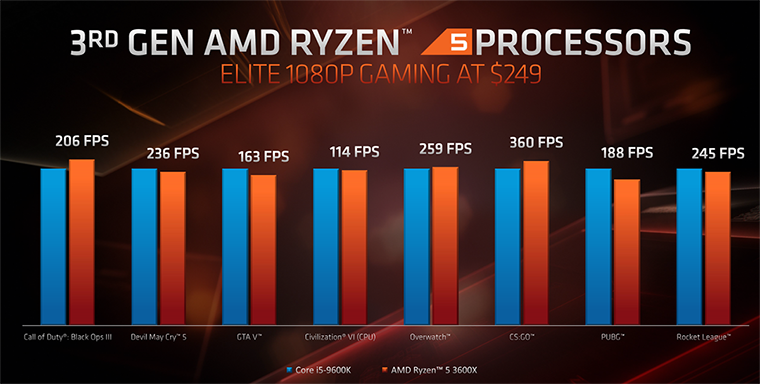 You get the drill by now. Roughly equal at 1080p gaming but much faster at content creation and full-on load. As above, the Ryzen chip, based on 7nm technology, is said to use more power. 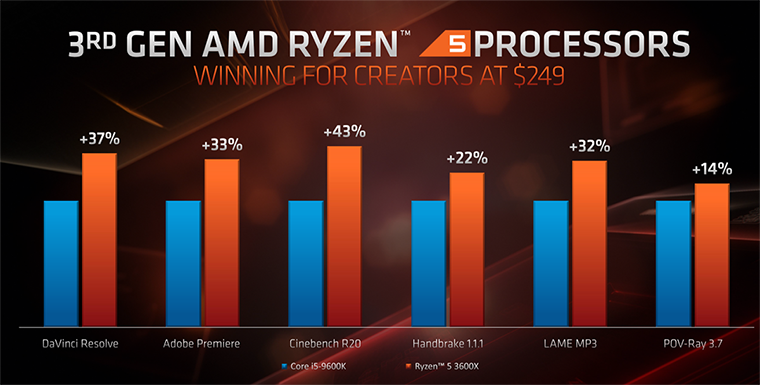 We'll know a lot more when the chips are in our hands. Full benchmark reviews are scheduled for that July 7 date, so stay tuned for our in-depth analysis. What we can say is that, from the various presentations during tech day, AMD reckons with Zen 2 it has closed the single-threaded gap to Intel's 9th Gen Core technology whilst widening the multi-threaded lead. Those are bold claim to make, all things considered, and there's always a feeling at these types of events that it's too good to be true - cherry-picked results that highlight a best-case scenario.

There's a lot to take in, but what do you think? Is Zen 2-based Ryzen likely to be your next go-to CPU? We'd love to hear your thoughts.


Intel, Price cuts? Haha!! hell will freeze over before they'd stoop so low as to price cut because of anything AMD comes up with.

Their corporate culture will simply not allow it. They'd rather take the market share hit until they're ready next year with a response.
Posted by DanceswithUnix - Tue 11 Jun 2019 08:04

Bagpuss
Their corporate culture will simply not allow it. They'd rather take the market share hit until they're ready next year with a response.

Whilst I don't think they will have a response as early as next year (10nm sucks for clock speeds so they are stuck with enhanced 14nm until their 7nm comes out) I agree they probably won't budge on price. After all, people kept buying the Pentium 4 and that was a piece of junk whereas what Intel are selling now is OK silicon, just might not be as good as AMDs in some circumstances. So corporate types will keep buying Intel chips in huge quantity.

What I will watch with interest is how the Dell product mix changes. They got labelled “the best friends money can buy” in past litigation, I can't imagine they want that label plastered on them again but just how much cash will Intel offer to keep them selling key products as Intel only.