...it's a match for the latest slew of PCIe 4.0 drives in everyday tasks, too.

Kingston has forged a strong relationship with controller manufacturer SMI and has used it to create a range of solid NVMe drives that offer well-rounded performance from a well-respected manufacturer.

The KC2500 builds on the KC2000 by upping the speed ante through tweaking of the base specification. There's a healthy dollop of extra performance that drives the KC2500 to premium status.

Other than the expected sequential speed deficit, it's a match for the latest slew of PCIe 4.0 drives in everyday tasks, too, so there's plenty to like if you want a solid M.2 offering on either Intel or AMD platforms.

In our opinion, Kingston can just about warrant the £170 pricing based on performance and a robust security suite, though there's little financial differentiation between it and PCIe 4.0 drives. Even so, it's a welcome addition to the high-performance M.2 NVMe SSD firmament. 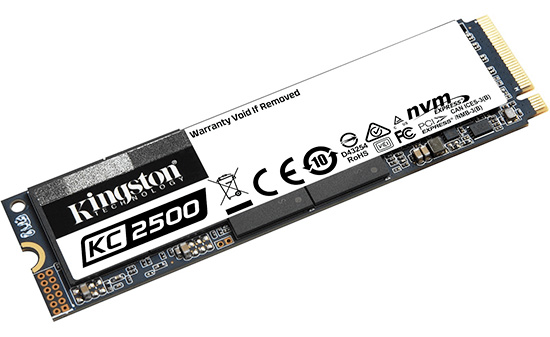 Posted by QuorTek - Tue 28 Jul 2020 14:58
Sounds like something I would buy…
Posted by Tunnah - Tue 28 Jul 2020 16:11
While it is a good justification if measured up against a e4 drive, I just can't imagine paying a 70% premium for real world performance improvements that aren't noticeable. The scenarios in which this drive would be needed feel like the sort of scenarios where they'd pay out for DC grade gear anyway.