Renewed CPU focus on the high-end desktop space by AMD and Intel has heralded opportunities for memory manufacturers to promote high-capacity kits.

The TRX40 3rd Gen Ryzen Threadripper and X299 Core i9 platforms use quad-channel memory for double the bandwidth of mainstream solutions. Most boards, premium in nature, also offer eight slots, and should you have enough cash, both platforms support a maximum of 256GB.

It is in this context that enthusiast-memory manufacturer G.Skill has a bewildering 70-plus kits providing between 128GB and 256GB in total capacity, though oftentimes the differences between each are solely colour or timings. Even limiting the selection to 32GB modules, options include Trident Z Neo, Royal, and Ripjaws V. 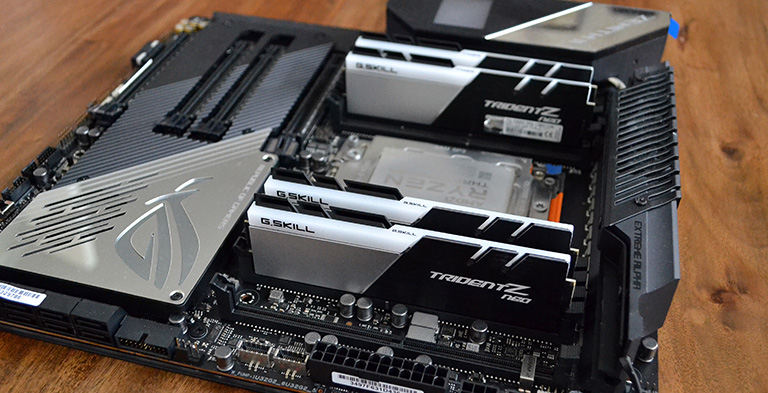 The Neo set is designed with AMD's 3rd Gen processors in mind. To that end, we've previously evaluated the technical merits of the range.

Based on a four-module pack with at least 128GB of capacity, G.Skill plays it somewhat safe with respect to latencies and speeds. Our test kit is actually the fastest speed and lowest latency on offer, which is to be expected as the kinds of systems this memory will go into don't readily benefit from 4,000MHz memory - utter stability is more important than the last drop of performance. To that end, regarding stability, we reckon going 128GB ought to bring ECC support with it, which is baked into the platform but not these modules. 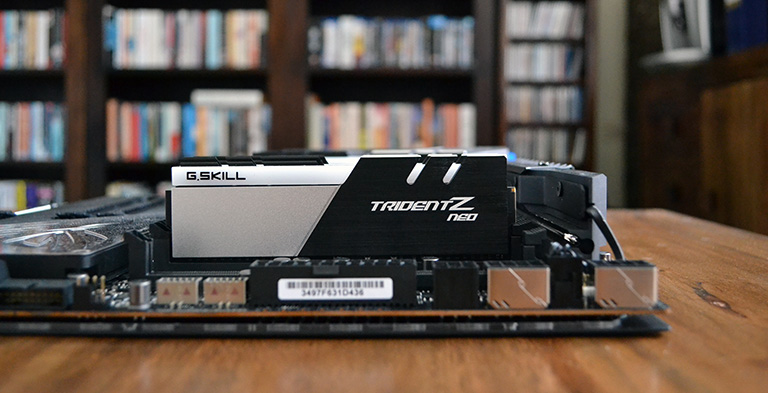 This set follows the general Trident Z design language of having an elongated s-shaped bar running along the top of the modules and fins on either side. Compared to a non-RGB-enabled pack, Neo decreases the fins from three to two, facilitating a wider light-bar, employs bevelled top edges that still remain sharp, and replaces the straight partition in the heatspreader with a diagonal one.

To our eye, the Neo modules look a bit sleeker and more minimalist than other Trident Z sticks, though do be aware that, at a maximum 41mm tall, height may be an issue if using certain air coolers. 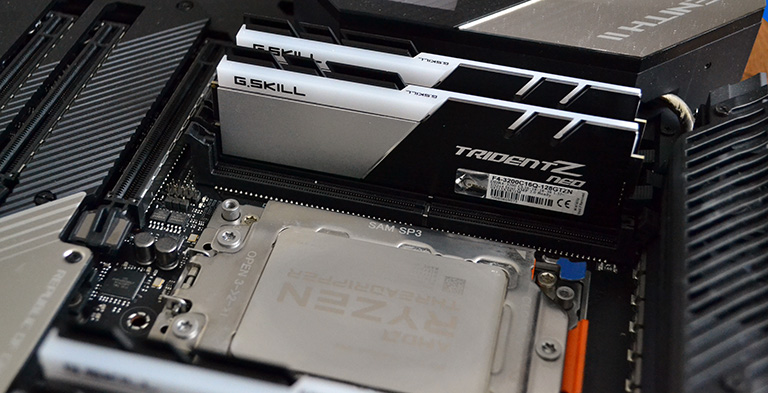 Build quality remains excellent. Eight-zone RGB is even and punchy across the light diffuser, and our samples look right at home on an ultra-premium ROG Zenith II Extreme Alpha motherboard. The qualified vendor list (QVL) includes all the major TRX40 and X299 motherboards, and using a 1.35V operating voltage makes sense in a stock-clocked system.

Such density certainly doesn't come cheap, however, as the kit retails for around £750. Sounds steep, right? But if you consider that a decent 32GB kit (2x16GB) costs around £150, the markup for pre-binned 32GB sticks isn't that much; this pack offers four times the capacity at five times the price. 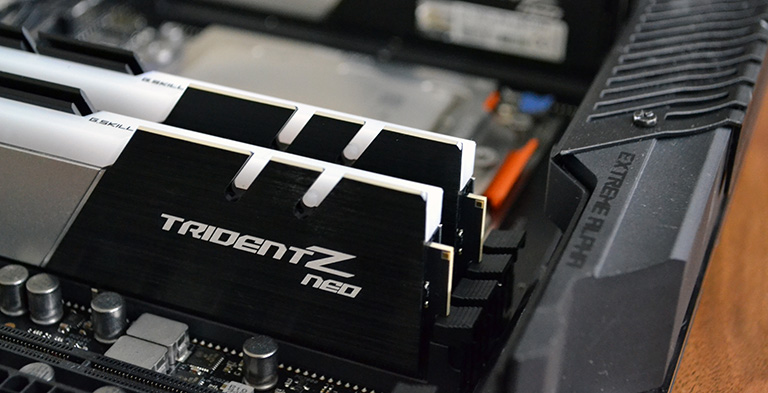 Going down the four-module route, a 64GB kit ought to cost around £300, so any prospective purchaser needs to evaluate their workloads and datasets to consider whether an extra 64GB is needed. In a non-server environment, we can think of two such use cases - data scientists with enormous working sets that need to reside in memory, or those who use a top-tier workstation to run multiple virtual machines each taking up a significant amount of RAM.

One still needs to put the cost into perspective. Those fortunate enough to justify a Ryzen Threadripper 3990X, Asus Extreme Alpha motherboard and, say, a GeForce RTX 2080 Ti will spend £5,500 on those three components alone. In that context, £750 isn't a deal-breaker.

G.Skill is aiming for a niche market where professionals need lots of capacity but not the security that's inherent in ECC modules. Let's now roll the numbers.