...the dual-screen laptop represents the sort of concept that rarely gets brought to life.

Futuristic in appearance and innovative in design, the Asus ROG Zephyrus Duo dual-screen laptop represents the sort of concept that rarely gets brought to life.

Asus's vast resources have allowed it to happen, and the firm's hardware expertise has resulted in solid build quality, sleek implementation, and a selection of components suited to a high-end laptop designed with both gaming and creativity in mind.

Ryzen 9 5900Hz and GeForce RTX 3080 Laptop are about as good as it gets, there's ample connectivity, the four-speaker sound system is impressive, and the goodness of the 4K 120Hz primary display is augmented by a 3,840x1,100 ultrawide that, while not as vibrant, succeeds in offering extra desktop real estate in a portable 15.6in form factor.

There are caveats, however. Cramming two screens results in a cramped keyboard and trackpad that we've struggled to get accustomed to, there's no webcam nor biometric security, and as much as we want to enjoy the secondary display, it needs developer support to truly shine.

Bottom line: you need to be absolutely convinced a secondary ultrawide display fits perfectly into your daily workflow for the £3,500 ROG Zephyrus Duo to be worthy of consideration. 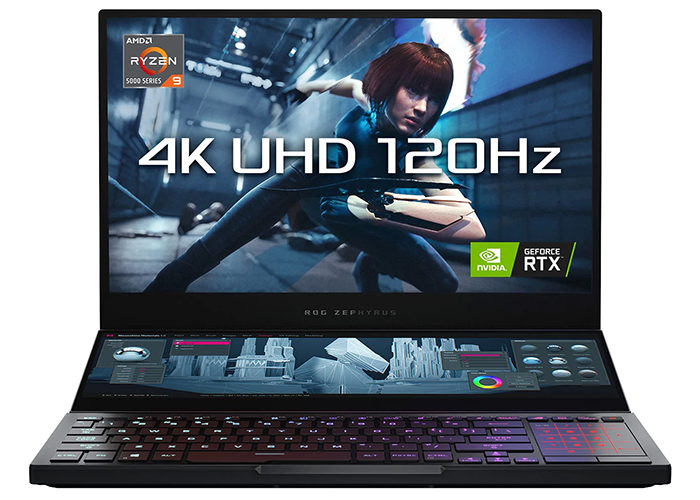 Indeed, it being the centrepeice and the WFH angle in the subtitle of the view, you'd expect it to be covered.

As for customisation, I reckon a lot of problems could be worked out with PowerToys and FancyZones. Kinda handy to be able to snap things to fit presized windows on a secondary monitor.
Posted by Ttaskmaster - Tue 18 May 2021 14:31
Awesome!!
I love insanely gimmicky stuff like this, as it often turns out to be pretty good actually!

HEXUS
the concern now has shifted to "what happens if/when people return to their cautious selves?

They stop spending, and after a while of companies restocking, the rest of us can finally buy the graphics cards we should have had ages ago… and hopefully at the prices initially advertised, too!!

Naw, you're just not trying hard enough, then!!

I still use a Logitech G19 keyboard for several reasons, but the biggest by far is that little LCD screen up top - It's so bloody useful, especially in games like Elite with dedicated and comprehensive apps. I've spent many many hours messing around with G19 applets and it's been pretty indispensable.

I'm always surprised at how many game devs do still provide an applet.
By comparison, a full width screen like this would actually make some games (Star Citizen, I'm looking at you) much more playable. It also wouldn't take much to code in the option (because having the choice always wins) to move certain game HUD/instrumentation/display elements to the second screen, like flight sims do. RPGs could use it for the inventory, maybe the rucksack or something.
Outside of that, there are many occasions when working on my office laptop that I could make use of this, either for extended display of multiple windows, media player, or even watching security cams while working.