...though it will add a whole lot of gaming potential to a compatible Razer Blade PC, the usual caveats still apply.

There are plenty of stunning Ultrabooks on the market today but gamers still need to a rely on a two-machine setup. A thin-and-light laptop is fine for everyday work and travel, but when you're home and ready to game, a powerful desktop is a requisite for most.

The concept of being able to bring the Ultrabook home and attach it to a dock carrying more I/O and a proper graphics card makes implicit sense. Take, say, a Razer Blade Stealth, hook it up to Core v2 via a single Thunderbolt cable and hey presto, your ultra-portable 13.3in machine can now benefit from multiple monitors, gaming peripherals, wired Internet and a powerful graphics card of your choice.

Razer's implementation is sturdily built and looks tidy on a desk, and second-generation improvements allow for a slightly larger graphics card while alleviating the I/O connectivity issues that plagued the original. Welcome changes, and the plug-and-play nature makes it effortless to use, yet don't be in too much of a hurry to retire your desktop just yet.

External graphics enclosures haven't quite reached the mainstream and it's clear to see why. Core v2 is a pricey prospect at £470 sans graphics card, it isn't guaranteed to work with every Thunderbolt-enabled laptop, and though it will add a whole lot of gaming potential to a compatible Razer Blade PC, the usual caveats still apply. Don't expect performance to be on par with a desktop, be aware of a further hit if you choose not to use an external monitor, and invest in a pair of headphones to mask the maddening fan noise.

Bottom line: Razer's Core external graphics accessory continues to hold plenty of promise, but affordability and performance will need to improve if it is to widen its appeal beyond the die-hard enthusiast. 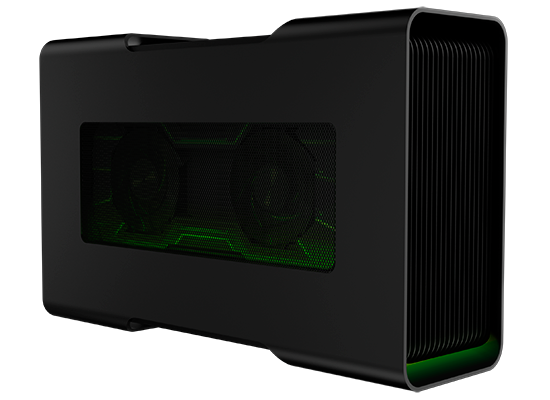 The Core v2 external graphics enclosure is available to purchase direct from Razer.

Is it possible to re-run some gaming tests with the desktop CPU set to broadly the same speed, core, thread numbers as the laptop part so that we can see if running an external GPU is still lower in performance than the desktop equivalent please.

At the moment it's easy to point the finger at CPU for the gaming performance difference but this might be masking a penalty for using external gfx as well.
Posted by Xlucine - Fri 16 Mar 2018 20:34
1) £500 for a PSU, case and two thunderbolt controllers is ridiculous - the entire system is £2700 for that laptop and external GPU, you could buy a really nice desktop for that with plenty left over for a non-gaming portable notebook.
2) With the performance delta between external and internal screens, it looks to me like the bandwidth was an issue - if it was fully bottlenecked by the CPU, then a small extra bandwidth demand like the screen data shouldn't have much effect. Thanks for including that comparison in the review, looks like it was worth doubling up on the testing
Posted by Tunnah - Fri 16 Mar 2018 21:24
Ah Razer, the Apple of Windows. 500 quid seems right around the “more money than sense” mark.
Posted by Tunnah - Fri 16 Mar 2018 21:25

Xlucine
1) £500 for a PSU, case and two thunderbolt controllers is ridiculous - the entire system is £2700 for that laptop and external GPU, you could buy a really nice desktop for that with plenty left over for a non-gaming portable notebook.

No arguing that Razer, much like the Apple, aim for the premium market (*) and price their products accordingly. Or I perhaps I should say (*) “mass premium”. They are still well within reach of people with average income if they are willing to give up some other non-essentials in it's stead. To me, “more money than sense” would be diamond encrusted PC/Mice/phones where it is just bling and nothing else.

Besides, is there anything else that does exactly the same thing as a Core for less money? And no, a full desktop isn't one. Anyone who might be interested in an external graphics card likely has reasons for not opting for a desktop + laptop (e.g. space, semi frequent moving, etc.).