Want the fastest, most feature-rich desktop PC platform in 2019? There is only one choice.

AMD completes the 2019 premium consumer CPU line-up by releasing the Ryzen Threadripper 3960X and 3970X CPUs and announcing the 3990X.

Though housing the same 24C48T and 32C64T counts of the previous generation, increases in all-core frequency and architecture improvements combine to push application performance to hither-to unseen levels, helped by letting the processors breathe through an elevated 280W TDP. With the mainstream Ryzen 9 3950X trading blows with Intel's finest HEDT chip, the new 'rippers move the needle firmly to the right, to a space where Intel simply cannot compete.

The Ryzen Threadripper 3970X is oftentimes twice as fast as Intel's premier HEDT chip, the Core i9-10980XE, and sets benchmark standards that are in a different league to anything its rival can muster without having to resort to $10,000 Xeons.

AMD's pursuit of a feature-rich, balanced platform brings a new chipset, TRX40, into play, and anyone contemplating these new chips will need to invest in a brand-new board, pushing the entry into the ultra-HEDT space to around $2,000. For that, though, you receive best-in-class peripheral support alongside extreme performance.

Want the fastest, most feature-rich PC platform in 2019? There is only one choice: AMD 3rd Gen Ryzen Threadripper. 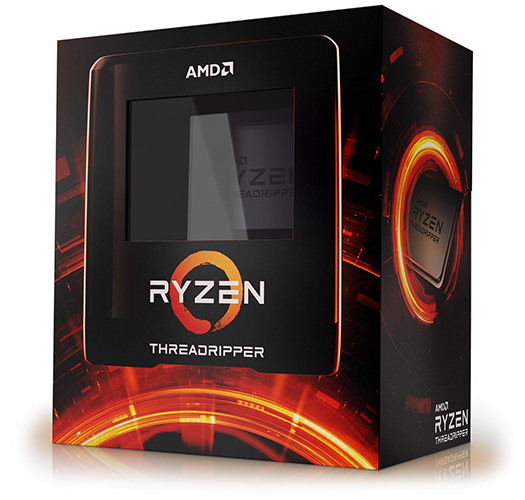 The AMD Ryzen Threadripper 3960X and 3970X HEDT processors are available to purchase at Scan Computers.

3dcandy
That's a kicking and a half right there….

sure is… those bruises won't heal fast.. solid drubbing
Posted by DanceswithUnix - Mon 25 Nov 2019 15:24
Is that really a smallish SATA SSD being used? That could well be the scaling issue in Handbrake. I don't expect Handbrake to scale well, but that result doesn't look quite right.

DanceswithUnix
Is that really a smallish SATA SSD being used? That could well be the scaling issue in Handbrake. I don't expect Handbrake to scale well, but that result doesn't look quite right.

Still, nice review, wish I could afford such a beast.