Intel's Innovation Unleashed provided rather lean pickings for PC enthusiasts and gamers, but it appears to be that the firm provided a brief glance of the Ghost Canyon NUC successor on Sunday. PC World reports that the new Beast Canyon, also known as the 8L Intel NUC 11 Extreme Kit, is "far bulkier," than previous NUCs, and is in essence an SFF PC design. 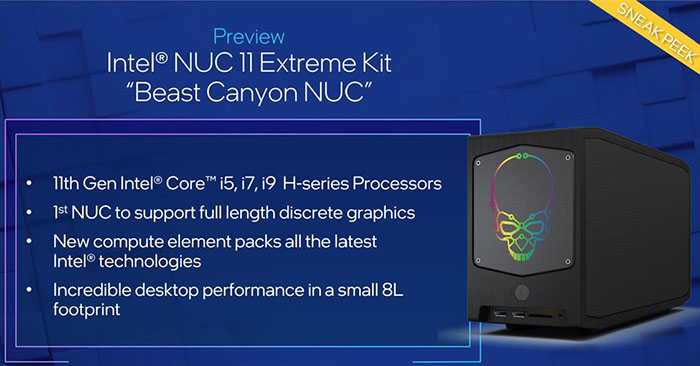 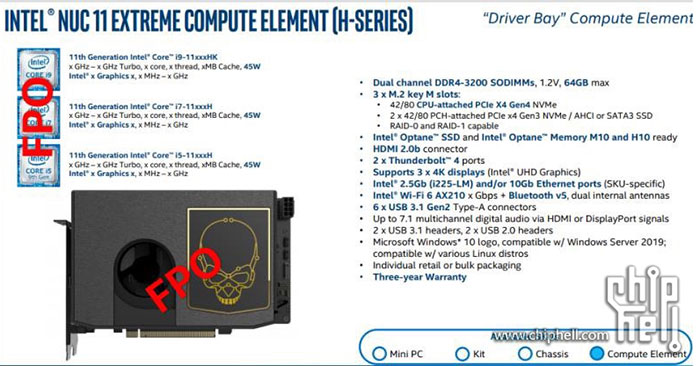 The new 8 litre Beast Canyon SFF updates with the latest 11th Gen Intel Core H-series processors, and now allows for much more powerful GPUs (up to 12-inches long, but other max dimensions weren't shared) – however it is quite far removed from the original NUC idea of a Mac Mini like compact PC.

YouTuber Moore's Law Is Dead (MLID) has shared pictures of a graphics card which is claimed to one of Intel's DG2-series products. It is based upon the Xe-HPG architecture and possibly codenamed Niagara Falls.

According to MLID the latest 512EU Xe-HPG graphics cards boost up to 2.2GHz, are paired with 16GB of GDDR6 on a 256-bit bus, and have a 235W TDP. Performance of this model is said to be between the GeForce RTX 3070 and RTX 3080 in raster but not yet there with ray tracing. Other info nuggets from the YouTuber are that these GPUs are built by TSMC on N6 or N7P, you are likely to see the first product launches in Q1 2022, and there should be models with 512, 256, and 128 EUs. Intel is highly confident in its leading GPU media encoding performance and still working hard on a DLSS competitor called XeSS.

Of course a desktop offers more performance for the buck, but some people have different priorities. Canyon nuc's are a niche product but if demand wasn't there intel wouldn't be doing them.
Posted by LSG501 - Mon 31 May 2021 19:42

Lots of reasons (like above) but the most obvious ones….
Don't play games so don't need massive gpu performance
Media player
Lower power device
I can think of several area's I could use one within my work flow too but kind of niche.


As to the beast canyon…. kind of interested to see how the intel gpu stacks up (it's not like nvidia/amd are easy to get) and this might be a nice little gaming rig if the rumours are true about 3070/3080 range performance.
Posted by Gentle Viking - Mon 31 May 2021 22:38

So what do you propose people use instead ?
Posted by jimbouk - Tue 01 Jun 2021 08:10
I guess with no portability requirements or space constraints then you can end up paying more for less. Though on a tight budget then a laptop can have the edge compared to separates.

What's the size difference between this and a compact and more versitile mITX build now? Fair enough when they were properly diddy but this seems to have just lost the plot.