AMD wants to grab some of the NUC market from Intel. In an email to HEXUS and an official news post the chipmaker announced that it has created "an open ecosystem for OEMs to create and customise high performance Mini PCs". These mini PCs will not be powered by versions of AMD's desktop processors such as Ryzen and Athlon CPUs and APUs. Instead AMD and OEMs will focus on the compact/low power/rugged niches, with the systems utilising the AMD Ryzen Embedded V1000 and R1000 processors.

"The demand for high performance computing isn't limited to servers or desktop PCs. Embedded customers want access to small form factor PCs that can support open software standards, demanding workloads at the edge, and even display 4K content, all with embedded processors that have a planned availability of 10 years," said Rajneesh Gaur, CVP and GM of Embedded Solutions at AMD, explaining the appeal of these new systems. 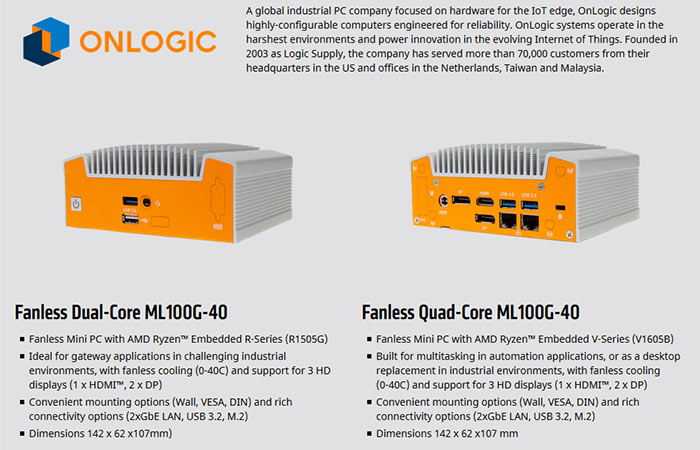 AMD was keen to stress the new mini PCs are a high performance open platform, with support for open software standards, with expansive peripheral support, in-depth security features, and plenty of build options to allow OEMs to create unique, customisable platforms. With this in mind it is worth a glance at the initial hardware partner offerings from the likes of ASRock and Simply NUC: 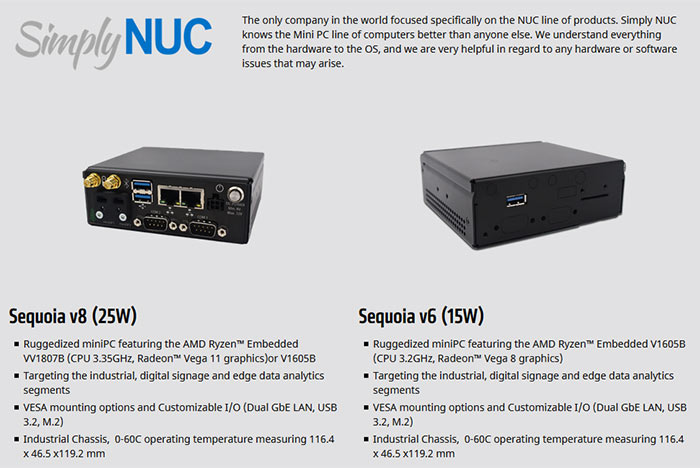 These mini PCs support a growing list of pre-validated packages based on open source software. They can run software for machine vision, object detection, edge inference, and analytics from AMD software ecosystem partners as well as packages utilising Radeon Open Compute (ROCm), OpenCL, and others.

Would like to see more of these NUCs as they seem to be doing the performance checkboxes, we just need the features on the NUCs themselves to stay at a competitive level!
Posted by persimmon - Fri 06 Dec 2019 23:37
v good first steps … lets hope they really can compete with iNTEl in the nUc market.
Posted by Kumagoro - Sat 07 Dec 2019 09:28
I have been looking to get a new tiny pc for ages but they never quite seen to match what I want.

Lately they have been getting closer in many ways, but nowadays they are missing one requirement which is important to me for tidyness.

Having a standard audio jack on the back.

Sure I want at least a headset jack on the front for that or a mic, but I don't want to run a permanently there cable making it messy.

Then there are never enough usb ports. I want two on the front minimum at Lear one usb 3. On the back I need 4 absolute minimum.

There is plenty of space in these things for more usb. They also waste a lot on video connections. display ports will do you can get converter cables or dongles easy enough cheaply to keep it tidy.

Also I want an m2 slot for an SSD and a space for a 2.5 inch HDD. Thankfully this is a lot more common than a couple of years ago.

The audio though, that seems to be getting even worse.
Posted by Aardvark - Thu 12 Dec 2019 18:51
I wonder if anyone is planning a chromebox with an AMD CPU as this would hopefully be cheaper than the Intel chromeboxes.