Intel's NUC 8 Mainstream-G mini PCs have reached availability. These mini PCs were originally codenamed Islay Canyon and unveiled this May. Four SKUs are available to choose from, from around $500 and up. The major choice you will face is between Intel Core i5-8265U and Core i7-8565U processors, storage is further configurable but the memory (8GB) and the GPU (AMD Radeon 540X, 2GB GDDR5) are soldered in, reports Liliputing. A comparison table featuring all four new NUCs is available here. 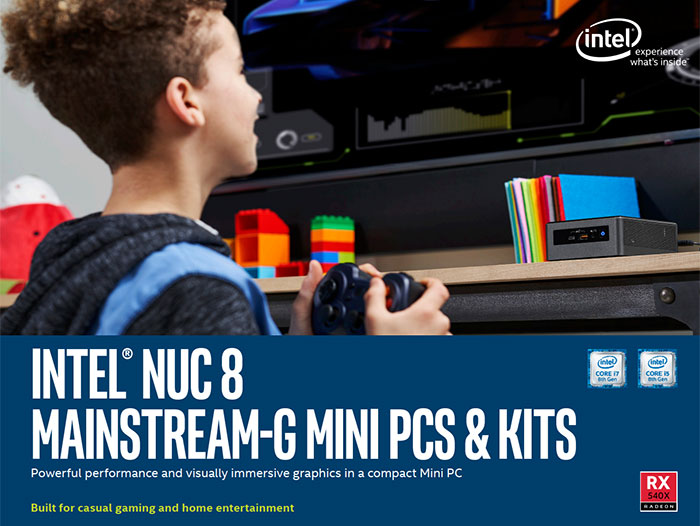 Looking at the CPUs first, the i5 choice is a 4C/8T part which offers a base/turbo of 1.60 / 3.90 GHz. It has a TDP of 15W and built-in Intel UHD Graphics 620 graphics. While it supports up to 32GB, theoretically, these NUCs are a bit unusual in having soldered in, non-expandable memory in addition to the soldered BGA processors and Radeon GPU. On the topic of the GPU, you will find a Radeon 540X with 2GB GDDR5 on-board. This GPU features 8 CUs, a boost frequency as high as 1.2GHz and max performance of up to 1.2TFLOPs, according to AMD's official GPU reference page. It is comparable in performance to the Nvidia GeForce MX 150 GPU. Thanks to the integrated and discrete GPUs your new NUC can connect up to 3x displays by a combination of HDMI 2.0b and Mini-DP 1.2 ports.

The Core i7-powered Islay Canyon NUCs use the i7-8565U with 4C/8T and base / turbo speeds of 1.80 / 4.60GHz. Again, the TDP is 15W. These more powerful mini PCs come with more storage options / permutations including hybrid offerings with Optane, plus a mix of 2.5-inch HDD, and M.2 PCIe x4 lanes SSD devices.

If you are interested in the Islay Canyon NUCs for "casual gaming and home entertainment" then you can grab them via Amazon US and Newegg now, as well as some other outlets stateside. I can't find them listed here in the UK at the time of writing.

azrael-
Optane is better than DRAM, hence you get twice as much of that. ;)

excalibur1814
What the heck is the point of throwing in the Radeon 540X when performance still sucks!? Something along the lines of a 1050 ti ‘might’ be worth a shot. I have a NUC8I5BEK in my front room and, other than emulators (Dolphin, BeebEm), I wouldn't dream of playing games. Same for the four models above. At least there's the NUC8i7HN.

Because it's basically integrated with the cpu? Will be a fraction of the price of a dedicated gpu as such