A new supercomputer dubbed Aurora, and expected to become the fastest in the USA, is in the works. This exascale computer (capable of exaFLOP of performance - equal to a quintillion floating point computations per second) will be installed in the Argonne National Laboratory in Chicago and put to task by the US Department of Energy (DOE). Aurora is a co-developed project from Intel and Cray, and as it is targeted for 2021 delivery will be based upon some future technologies from Intel's roadmaps. In comparison with the fastest supercomputer running today, Aurora is about 7x faster, or about 1,000 times faster than the first petascale systems that begun to come online in 2008.

What will all this computing power be tasked with? According to Intel's blog post on the news, Aurora will handle both traditional HPC tasks plus AI, to "give researchers an unprecedented set of tools to address scientific problems at exascale". Problems such as extreme-scale cosmological simulations, discovering new approaches for drug response prediction and discovering materials for the creation of more efficient organic solar cells will fall under Aurora's remit, it expects. 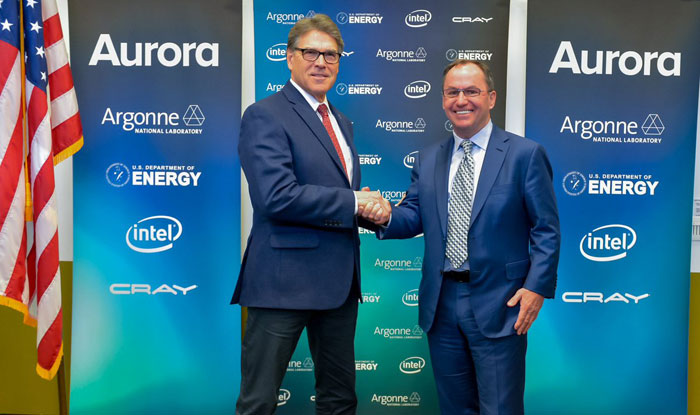 Aurora was featured in a New York Times story a few hours ago, which quoted Raja Koduri (SVP of Intel's core and visual computing group) as proclaiming "We want to make exascale computing available to everyone". Koduri also explained, via Twitter, that the Xe GPU was supposed to be called the eXe, a contraction of 'eXascale for everyone'.

Intel and Cray are expected to deliver Aurora to the DOE, at a cost of approx $500 million, sometime during 2021.