The SpiNNaker neuromorphic supercomputer has been in planning and development for over 20 years at The University of Manchester. Today, at long last, the finished million-processor-core machine has been switched on for the first time. The project was initially backed by the Engineering and Physical Sciences Research Council (EPSRC) and is currently supported by the European Human Brain Project.

SpiNNaker is short for Spiking Neural Network Architecture computer and has a million processor cores at its disposal. This immense quantity of processor cores can model a billion biological neurons in real-time, and is capable of 200 trillion operations per second. The SpiNNaker neuromorphic computer can model more biological neurons in real time than any other machine on the planet.

HEXUS has previously covered neuromorphic computer advances such as the BrainChip neuromorphic accelerator PCIe card, and Intel's progress with the Loihi chip. Seasoned readers will know how such computers are designed to "mimic the massively parallel communication architecture of the brain, sending billions of small amounts of information simultaneously to thousands of different destinations," as The University of Manchester Newsroom puts it.

Steve Furber, ICL Professor of Computer Engineering in the School of Computer Science at The University of Manchester, credited with the conception of the SpiNNaker project, said he was extremely excited by the potential of the computer. However, compared with real organic brains the core count vs neuron count is still quite low. For example a mouse brain consists of around 100 million neurons and the human brain is 1000 times bigger than that - and the human neurons are connected via approximately 1 quadrillion synapses. 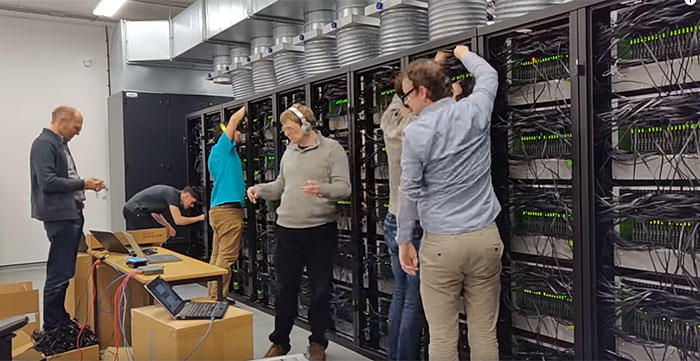 One of the central tasks of SpiNNaker will be in analysing and understanding how brain processing works. It has already been used, on its way to 1 million cores, to run an 80,000 neuron model of a segment of the brain's cortex. It has also simulated the brain's Basal Ganglia region - an area affected in Parkinson's disease. Thus it could potentially be used in pharmaceutical science. Other similar unprecedentedly large scale simulations are planned by scientists.

Working on SpiNNaker will also hopefully aid in the realisation of mould-breaking new computer architectures with an expected result being a significant leap in energy efficiency in supercomputer systems.

An interesting side project is the SpOmnibot. This is a robot which uses the real-time processing power of SpiNNaker to interpret visual information and navigate towards certain objects while ignoring others.

Posted by philehidiot - Fri 02 Nov 2018 15:39
An interesting side note - I see the EU flag on there. If it's partially funded by the EU I wonder what the contract says? I doubt us leaving the EU was a consideration when it was written but I wonder if the University will have to buy out the EU's stake in the project?

John_Amstrad
What waste of money and time!! They used ARMs instead of Threadrippers, OMG

The chip was taped out in 2010, so computing on a GPU was in its infancy when this was designed. At this point I have to wonder what the system brings to the table of any interest in the face of GPUs with fp16 MAC instructions and most research happening with tensorflow which has optimised hardware already in phones in people's pockets as well as Nvidia's new GPUs.


Edit: They aren't the only ones throwing CPUs at the problem though…