The new NUC8i7BEH, NUC8i5BEH, NUC8i5BEK, NUC8i3BEH, NUC8i3BEK are based on the 8th Gen Intel Core i7, i5 and i3 processors (formerly code-named Coffee Lake-U) and feature Intel Iris graphics with eDRAM. Intel suggests that that are suitable for home theatre systems, content creators, and/or as personal voice assistants.

As these are kits, they are essentially barebone devices to which you add your own storage, memory and operating system. So, of course you can decide and choose to configure your NUC to fit your budget and purpose.

As mentioned in the intro these are the first mainstream NUCs to come packing discrete graphics. The NUC8i3CYSM and NUC8i3CYSN are powered by the 8th Gen Intel Core i3-8121U processor and are differentiated by the varying amounts of RAM fitted (4GB or 8GB). 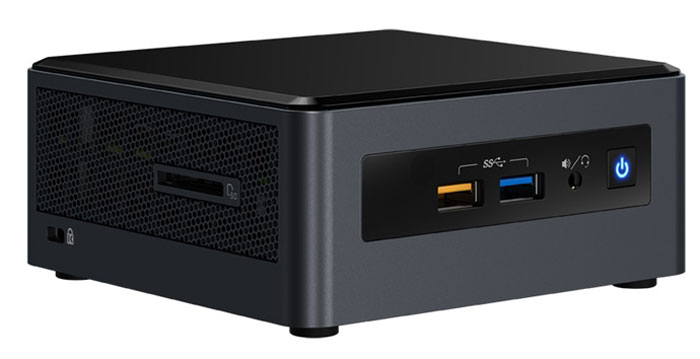 Intel has decided to fit a discrete AMD Radeon 540 GPU with 2GB of graphics memory. Thanks to this GPU, Intel claims that the NUC Mini PCs are capable of mainstream gaming at 1080p in popular titles such as League of Legends, TF2, and CS:GO.

Intel says that its new NUC kits and NUC mini PCs will be available worldwide through beginning from September. We don't have any indicative pricing at this time and unfortunately it is a little bit early for the product pages to go live at Intel.com. However, if you are particularly interested in these products you can check back at the dedicated NUC portal, for further details which are likely to be published soon.

ETR316
oh how i wish this had USB 3.2 ports, I guess two more years before that happens.

We're only just seeing manufacturers start implementing USB-C connectors and USB 3.1 gen 2 specs. At least some of these kits have USB-C connectors.
Posted by Wolfclaw - Fri 17 Aug 2018 12:12
I wish AMD's partners would do cheap bare bones box, a little Ryzen APU based system would be nice !
Posted by Savas - Sat 18 Aug 2018 10:08

Wolfclaw
I wish AMD's partners would do cheap bare bones box, a little Ryzen APU based system would be nice !

Same. Some competition would drive this market.

Tbh if they simply add something to have external GPU's I think people will definitely think twice.