Team Group has launched a pair of new NVMe PCIe Gen3 x4 SSDs aimed at gamers; the T-Force Cardea Zero Z330, and Z340. So far, so ordinary, but these new M.2 form factor storage devices have a little cooling trick up their sleeves. Team Group has fitted its patented graphene copper foil cooling module to these Zero drives, which in internal tests "provided a 9 per cent cooling effect" in sustained use. These patented coolers are just 1mm thick.

Before going on, we need to look a bit closer at Team Group's cooling claims. In its email to HEXUS, Team Group said that the near 10 per cent cooling effect was observed after three hours of continuous read/write ops. However, if you go the the device product pages you will see that the test was not vs a conventional metal heatsink but against no heatsink in place at all. In addition to that, Team Group seem to excel in making eyebrow raising products with interesting claims to fame, which some would say exhibit  'style over substance'.

A recent example of Team Group's design frivolity is seen in the HEXUS reviewed Cardea Liquid M.2 PCIe SSD (512GB). This captive liquid cooled storage device didn't really offer any advantage compared to those with a standard heatsink in our tests. Punters would basically be paying a premium for the style, for the brightly coloured liquid cooled device. As long as people know they are paying extra for frills, it is hard to complain, and many will be happy with their choices.

Back to the new products, and the T-Force Cardea Zero Z330 and Z340 are capable of continuous read/write speeds up to 2100/1700MB/s and 3400/3000MB/s respectively, and will be made available in capacities ranging from 128GB to 1TB. Both product lines have comprehensive intelligent management technologies such as S.M.A.R.T. (Self-Monitoring Analysis and Reporting Technology), TRIM command, LDPC ECC error correction mechanism, etc. 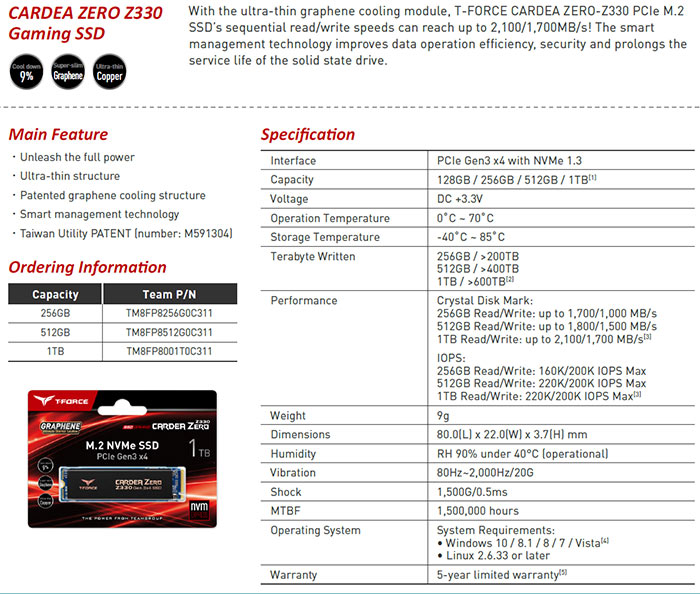 Please check the specs tables images embedded above and below for all the info. 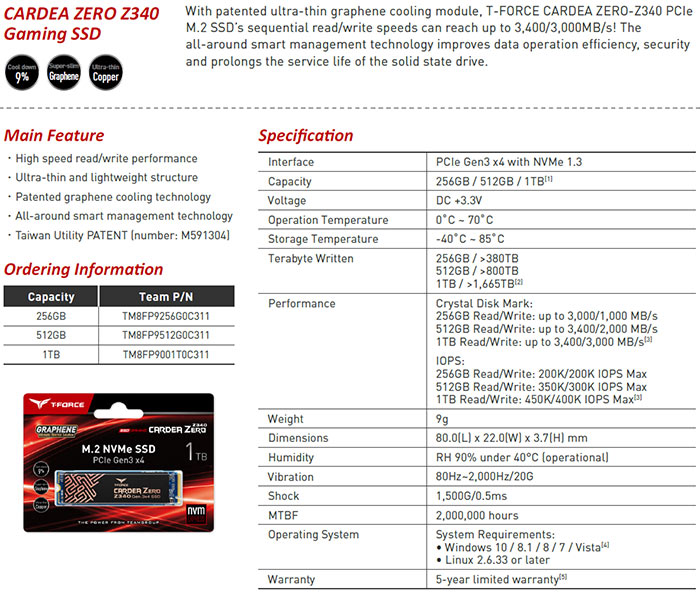 Team Group provide their products with a 5 year warranty. We don't have pricing or availability details at this time.

Posted by philehidiot - Wed 15 Apr 2020 11:41
I'm glad you asked the question “9% Vs what?”. Maybe I'm being silly but surely 9% lower temperatures with a heatsink Vs none makes this a very poor heatsink? It sounds like it's just a thin thermal pad to conduct heat away from the chip and into the material rather than to actually remove it into the surrounding environment. It doesn't appear to increase the surface area or anything. But…. GRAPHENE! Wooo!
Posted by DanceswithUnix - Wed 15 Apr 2020 11:47

philehidiot
I'm glad you asked the question “9% Vs what?”. Maybe I'm being silly but surely 9% lower temperatures with a heatsink Vs none makes this a very poor heatsink? It sounds like it's just a thin thermal pad to conduct heat away from the chip and into the material rather than to actually remove it into the surrounding environment. It doesn't appear to increase the surface area or anything. But…. GRAPHENE! Wooo!

Yeah it is more of a heat spreader. That could be handy when the motherboard has an actual heat sink and thermal pad and this acts as a sort of short term buffer and heat soak.

Let's face it, these devices are fast enough that you don't usually hit them hard for more than a matter of seconds before your application or game is in ram and the SSD can cool back off again.

As long is it doesn't add a lot of cost, this looks OK. Unlike that liquid cooler thing that just seemed daft :)
Posted by Gentle Viking - Wed 15 Apr 2020 14:25
My Gigabyte X399 Aorus extreme have “heatsinks” for the Nvme drives, but really i have little faith in this slab of metal covering the drives, this is actually one of the things i am thinking about changing when i put my hardware into its new home.
CUZ the new home are designed to have a ample direct airflow across the entire motherboard, so this should do more good than just simple convection and whatever level of indirect airflow in a case.
Will have to look into aftermarket Nvme cooling profiles soon.
Posted by QuorTek - Wed 15 Apr 2020 16:08
so how hot do these things actually get and does it really matter? lol
Posted by ohmaheid - Wed 15 Apr 2020 16:38

QuorTek
so how hot do these things actually get and does it really matter? lol

Some motherboards only have the one slot - usually situated between the CPU socket and the PCIE x16 Graphics card slot (as mine has)…So it could get pretty toasty. I've always thought it was the most stupid place to put these NVME drives as heat is the killer for any type of storage.