The first consumer desktop PC platforms supporting DDR5 system RAM are expected to become available towards the tail end of 2021. This is thanks to the arrival of Intel's Alder Lake processors and supporting motherboards, probably in Q4. AMD is expected to catch up with its first Zen 4 processors, Ryzen 6000 series, a month or two later. After that time, premium / high-end PC systems based around either of the major x86 vendors will come packing DDR5. One would reasonably expect DDR5 support/penetration to be even greater in the following generation.

With the above in mind, it perhaps isn't surprising to see market researcher Yole Developments' forecast for DDR bit shipments up to 2026, via i-MicroNews. Yole reckons the DDR market as a whole is "looking bright" with revenues set to peak in 2022 and long time growth of 6 per cent expected in each coming year of its forecast. 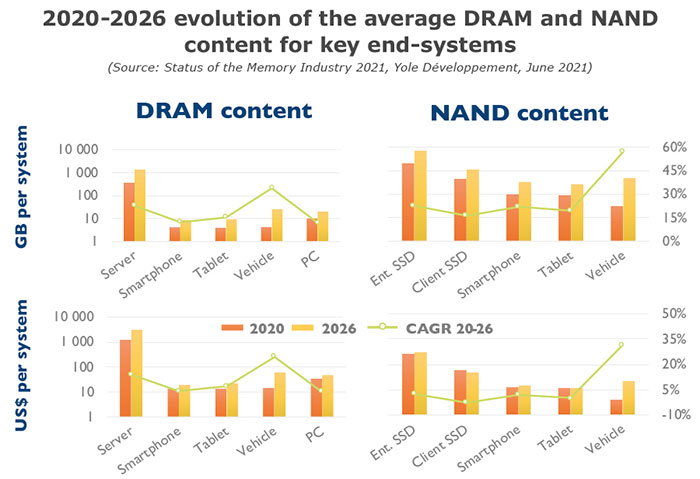 Average selling price per bit is going to fall, but that isn't such bad news with bit densities on the up and DDR5 is upping die density by a factor of four. HEXUS regulars will also be familiar with and looking forward to the performance benefits touted by DDR5 technology, i.e. doubling the maximum data rate from DDR4. Additionally, DDR5 is more power efficient and include other architectural niceties like on-die ECC, and on-module PMIC. 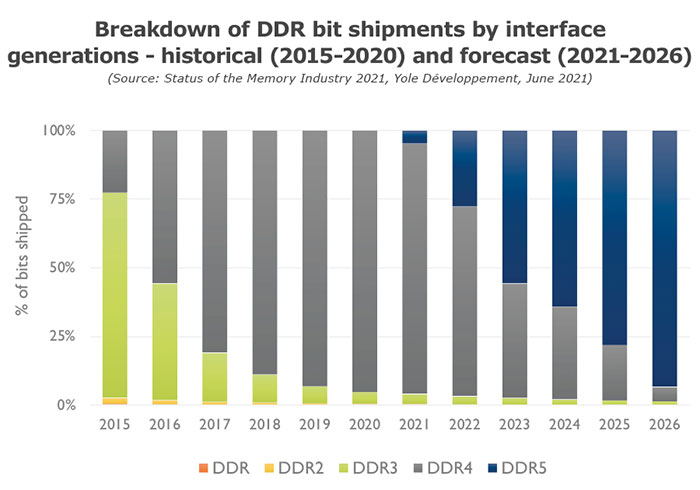 The chart directly above gave birth to our headline, but it must be viewed in the context of the chart above it. In other words, the big swing from DDR4 to DDR5, resulting in DDR5 leading in bit shipments as early as 2023, is going to be led by the server industry – with its significantly greater bits shipped per annum. You can see DRAM shipments off the pack of PCs are far lower, and more comparable to automotive.

Compare 2021 to 2026, and you get the impression that the ascent of DDR5 will be rather quick and decisive. Five years from now, it looks like DDR4 will only be used by a minority of new devices, probably entry level PCs/laptops and mobile devices. Some production capacity will remain to serve upgraders still using platforms with only DDR4 support.

In which case, the key question must surely be how good were Yole Developments' DDR3 to DDR4 forecast compared to the reality?

Additionally, DDR5 is more power efficient and include other architectural niceties like on-die ECC

Thank you for this link, I was really hyped for the ECC, guess it was just marketing, BS and cost reduction.
Ah well, it was in fact too good to be true.